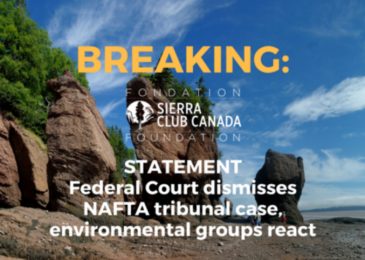 After the feds and the province rejected a proposal to expand a quarry situated on Digby Neck more than a decade ago , the American developer appealed that decision under the North American Free Trade Agreement (NAFTA) rules. Today we find out the Americans won, and Canada is on the hook for half a billion dollars.

The 2007 decision not to approve the Whites Point Quarry in Digby Neck is still not entirely settled. Now the Canadian government is appealing a NAFTA decision that withholding environmental approval was unjustified. Let’s make sure that the government fights this case, rather than settle, there is too much at stake, says Gretchen Fitzgerald of the Sierra Club Atlantic.