Confessions of a woman who burnt down a town

In June 1734 Marie Joseph Angelique a Black slave woman was hanged in Montreal for burning down much of that town in April 1734. Her last days provide the inspiration for this poem.
***

I buried the twins that evening
they died of smallpox
were only 8 months old
Madame came too to the funeral
and said to me by way of consolation
‘c’est la vie,
I too have lost my own.’
I went back to work
went back to work in Madame’s house
that same evening and at supper she yelled at me
and box me full in the face because
I overturned the gravy bowl in her lap

I remember my journey from my island to this island
From Rhode Island to Montreal
Lived in Rhode Island all my life ’till
monsieur came from Montreal on one of his business trips
he bought me because he said I looked like a healthy wench.
Monsieur died soon after and madame never forgave me
but I had nothing to do with it, he died of consumption

The twins died too.
After we buried them that evening
my heart changed position in my chest
and I was seized with one desire and one desire only
and that was to leave the prison of this island
But where could I go
because throughout the whole world
in all the continents people who look like me
were bound
But still, all I could see was
my feet running, no chains, no rope, no shackles
free

Madame talking to her best friend
and confessor Father Labadie
‘I’m going to sell that negress, she’s getting too much
for me, she’s getting too uppity
And furthermore since François died I just can’t seem to manage too well,
perhaps the church is interested?’
I bring in the food and pretend like ah neva hear
and I serve the food good and proper
was on my best behaviour
roll back mi lip and skin mi teeth
roll back my yai and show the white
den I went back to mi room in the cellar
and mek mi plan

Smoke, smoke, too much smoke
only intend fi one house fi burn
fire, fire, too much fire
but it done go so already
and I running
my feet unshackled, unbound,
free
running pass di city limits
while behind me di fire rage
and my raging heart change back into its rightful position

He was running too
an apprentice, from France
I gave him all my food to take me or show me
the way to New England but he tek the food
and leave me while I was sleeping
an the constables caught me

I don’t utter a word as I sit here in the jailhouse
Father Labadie come to confess me
but I refuse
their god is not my god
‘Arson is one of the worst crime in New France Marie,’
he say to me, ‘confess now and save your soul.’
But I don’t hear him
outside, the mob want to rip me from limb to limb
but I not afraid, a strange calm fill my body
and I at peace, peace, perfect peace

Guilty, the judge pronounce
and the sentence: to be tortured, my hands cut off
my body burned and the ashes scattered
to the four corners of the earth
I break down, my body crumple in a heap
and before my eyes I see the twins
and they look so alive as if they waiting
for me to come nurse them
The sentence is reduced
Now I am to be hanged only and my body burned
Father Labadie come back for di confession
And I confess
is I Marie who set the fire
I say yes
I start it in madame’s house by the river
50 building destroy
the hospital, the cathedral
I confess
is I Marie who burn this city
so write that down Father Labadie
write down my story so it can be known in history
with my heart burning I take the sacrament
and accept the final rites
outside the guard is waiting
to take me to the hangman’s noose
Soon I will be free from the prison of this island
and I will fly and fly and fly

Afua Cooper is a poet, educator, and historian, and currently the James R. Johnston Chair in Black Canadian Studies at Dalhousie University. 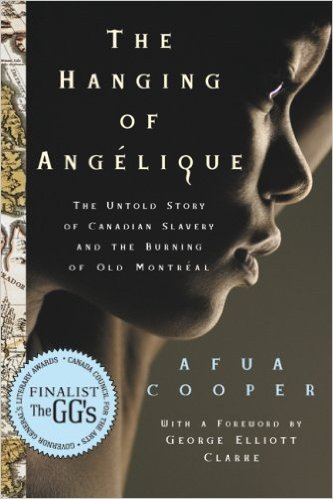 Her groundbreaking book The Hanging of Angélique: Canada, Slavery and the Burning of Montreal, focuses on the historical events surrounding Angélique, a Canadian slave woman who was hanged in Montreal in 1734 for setting her owner’s house on fire and burning down a large part of the city as a result.

That’s the same Angelique who is the subject of the wonderful poem featured above.

Cooper’s book challenges popular histories of Canada as a benign haven from slavery. The life of mostly domestic slaves in our part of the world was in many respects every bit as terrible as that of plantation slaves in the South.

Slaves in Canada were mere property to be sold at their owner’s whim, uprooted and separated from children and loved ones. They were under constant surveillance of their masters, and brutally punished for the slightest infraction. Especially women were often raped by their masters.

Transcripts of Angelique’s interrogations (accomplished with the help of gruesome torture) and court records of Angelique’s trial may well constitute the oldest slave narrative on record.

A non-fiction book that in part reads like a novel, it’s a book like no other. I highly recommend it.

See also: The Passage. A poem by Sylvia Hamilton