KJIPUKTUK (Halifax) – Two books, one fairly recent and one that has been around for over twenty years, both tackle the lives of Mi’kmaw children at the Shubenacadie residential school in Nova Scotia. Both books provide insight into that horrible place, but they do so in different ways. 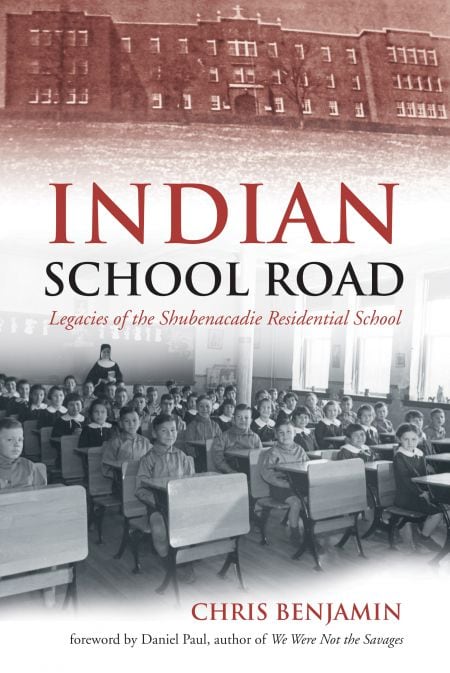 Chris Benjamin’s Indian School Road, released in September 2014, is a comprehensive, balanced and well-researched book on how a Canada-wide attempt to assimilate first nation children through brute force played out in one residential school. It’s also a page turner. Benjamin knows how to make the story come to life.

The Shubenacadie Residential School, like all residential schools at the time, was run by a religious order, in this case the Sisters of Charity, and (under)funded by Indian Affairs. The school was in operation between 1923 and 1967. Almost all the children at the school were Mi’kmaq from Atlantic Canada.

The school’s aim was to teach the boys basic carpentry and farming skills, the girls some housekeeping, and some elementary reading, writing, and math for all. More important than education was to strike the fear of God in the kids, “to brighten their shadowed lives with the splendour of the Gospel truth,” as one of the nuns wrote.

But most importantly, the schools’ objective was to “take the Indian out of the child”. That meant, separate the children from their parents, their culture and their community, do not allow them to speak Mi’kmaw, and constantly remind them of the superiority of white settler culture.

“We stole and culture-washed 150,000 children. At least 3000 were killed. Based on Indian Affairs reports on disease, the real number of deaths is 30,000 or more. The survivors suffered lifelong injury. Many survived the school only to succumb to its ghosts, eventually taking their own lives to escape the pain,” he writes.

Benjamin talked to residential school survivors, teachers and others, but his research relies mostly on official records and existing personal accounts. The picture that emerges is one of penny-pinching bureaucrats, overcrowding, deadly diseases and a constant nagging hunger. Cruelty, racism, sadism and sexual abuse by some of the nuns and priests added a constant sense of terror to the students’ experience.

He describes how most of the children, sometimes as young as four, were taken against their parents’ will by Indian Agents who did not need to provide any rationale. “Uniformed RCMP officers ripped some children from their parents’ arms,” Benjamin writes. “They cried and clutched and grabbed desperately for the protection and love they’d known.”

Benjamin documents the mostly futile attempts at escape, the punishment of escapees (brutal beatings, lock-ups, no food), and the whitewashing by a Nova Scotia judge and the Chronicle Herald when those punishments gets out of hand and some (white) people speak up.

The book also delves into the aftermath of the residential school system, the formal apologies by churches and government, the reconciliation efforts and Mi’kmaw-initiated educational reforms.

The second book takes a different tack. An eyewitness account, Out of the Depths, by Isabelle Knockwood, who attended the Shubenacadie Residential School between 1936 and 1947, offers a first hand account of life at the school. 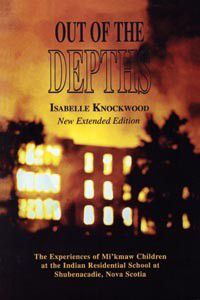 Benjamin focuses on the machinery put in place to crush the children’s identity – the nuns, the administration, and the bureaucracy. Knockwood tells us what it was like to be inside, and she does it with a great eye for the telling detail.

Here is how Knockwood remembers the fateful day when she first arrived at the school, all of five years old. After changing into standard clothes, striped like prison garb, being assigned a number, and having her hair cut she notices her parents walk away from the school.

“This is the first time I had ever seen Mom walking alone, without any of us by her side. Had she been tricked into leaving? I wondered. The nun took my hand and started to pump it up and down, ‘Wave goodbye to your mother,’ she said. “Mom looked so strange. Her figure was silhouetted against the Shubenacadie River, and she was walking away from us with her back turned. This was indeed a very bad omen.”

One day during her first year at the school little Isabelle comes upon Wikew, the students’ name for a particularly mean-spirited and sadistic nun, beating up a little girl for speaking mi’kmaw. Speaking mi’kmaw, “that mumbo-jumbo”, was strictly forbidden at the school at all times.

“From where I was standing by the toilet door, I could see the nun’s back. Her arms were swinging. When Wikew hit with her right hand, her black veil swung left and when she slapped with the left the veil went in the opposite direction. I could see the girl’s feet. At first, she was standing with both feet on the floor. Then the Sister pinched her cheeks, and her lips were drawn taut across her teeth, and her eyes were wide with terror. Then the nun picked the girl clean off the floor by the ears or hair, and the girl stood on her tiptoes with her feet dangling in the air so that one of her shoes fell off.”

Benjamin’s well-written Indian School Road should be appreciated for its detail and thoroughness. Read Knockwood’s Out of the Depths to get a feel for what it was really like.

To quote Mi’kmaw historian Daniel Paul, author of We were not the savages, in the foreword to Indian School Road: “This story by Chris Benjamin about the Shubenacadie residential school is your story, not ours.”

Out of the Depths. The experiences of Mi’kmaw children at the Indian Residential School at Shubenacadie, Nova Scotia. Isabelle Knockwood, with Gillian Thomas. Roseway Publishing, an imprint of Fernwood Publishing

Next Post Kendall Worth: An open letter to Kelly Regan, the new minister of Community Services