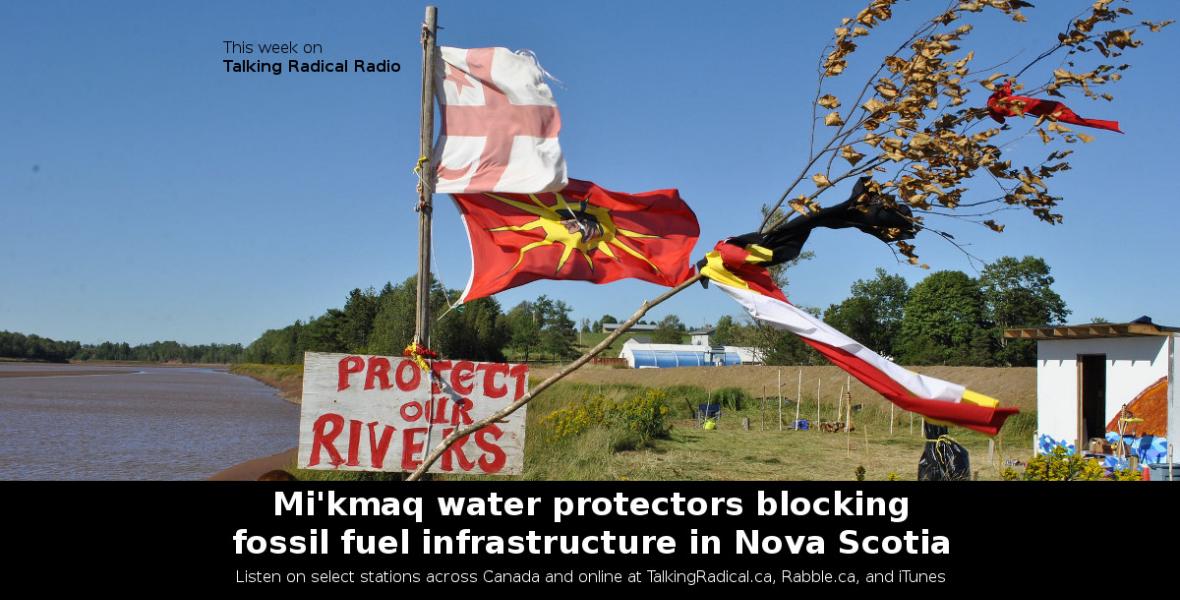 This story was originally published on Rabble.ca. Re-posted with Scott Neigh’s kind permission.

Dorene Bernard is a Mi’kmaq woman of the Otter Clan from Sipekne’katik and a residential school survivor, and she describes herself as a grassroots grandmother, a water walker, and a water protector. Rebecca Moore is a Mi’kmaq woman from Pictou Landing First Nation and a water protector. Scott Neigh interviews them about the treaty camp and other grassroots Mi’kmaq resistance that is blocking the Alton Natural Gas Storage project, a key piece of fossil fuel infrastructure in Nova Scotia that would help pave the way for the re-introduction of fracking in the province.

The Mi’kmaq people who live in Sipekne’katik First Nation in central Nova Scotia first encountered signs of the project when they noticed a new clearcut by the side of the highway. After some investigation, they discovered that Alton Gas, a subsidiary of giant Calgary-based energy corporation Alta Gas, intends to use large natural salt caverns that are around one kilometer under ground to store liquid natural gas. To do this, they need to remove the salt from the caverns. They have been building a pipeline to take water from the Shubenacadie River, which would transport it about 12 kilometers, run it through the caverns to dissolve the salt, and then transport the salty water, or brine, and dump it back in the Shubenacadie River. The current stage of the project involves doing this to two caverns, though in the longer term it may involve as many as twenty.

The fact that grassroots people in the closest First Nation had never heard of this project when the work was already underway shows that it had received nothing even close to the free, prior, and informed consent required by the United Nations Declaration on the Rights of Indigenous Peoples. The provincial government claimed it had fulfilled its legal duty to consult – a much lower standard even when done right – when it obtained the approval of the Mi’kmaq Rights Initiative, an organization that represents the elected band council leadership of many of the Mi’kmaq communities in Nova Scotia, though not the Mi’kmaq Nation’s traditional leadership and not even the band leadership of Sipekne’katik.

This lack of consent is central to the objections of many Mi’kmaq people who oppose the project, but it’s far from their only concern. They and their many allies are also very concerned about the risks of storing large volumes of liquid natural gas in this way, and about the impact that dumping large amounts of salt water will have on the Shubenacadie River and the fish and other creatures that call it home. Though there was a provincial environmental assessment, it did not consult local and/or Indigenous knowledge holders, and opponents have identified numerous flaws in its findings and conclusions.

Moreover, it has become clear that Nova Scotia currently doesn’t produce anywhere near enough natural gas to require a storage facility like the salt caverns. The project only makes sense if understood as a piece of infrastructure preparing the province for large-scale use of hydraulic fracturing, or fracking. This controversial unconventional extraction process involves the high-pressure injection of a soup of chemicals into rock formations to fracture them and force out natural gas that would previously have been unobtainable. There has been grassroots mobilization against it in jurisdictions around the world, and there is currently a moratorium on the practice in Nova Scotia (won after extensive advocacy in earlier years), but opponents of the Alton Gas facility have seen indications that suggest the province intends to end that moratorium – once again taking resources that still belong to the Mi’kmaq people without their consent, and engaging in environmentally destructive practices.

The opposition to the Alton Gas project has taken various forms. One was a legal challenge heard in 2016, which resulted in a ruling that the province had not been procedurally fair in relation to the environmental assessment and appeals of its decisions, but which did not address the question of the government’s duty to consult with First Nations.

As well, grassroots Mi’kmaq people and their allies have maintained a treaty camp for purposes of land and water defense at the Alton Gas site on the Shubenacadie River since Labour Day weekend of 2016. Dorene and Rebecca are both participants in the treaty camp. Over the course of the occupation, the water protectors have erected a treaty truck house, engaged in treaty-protected activities like fishing, and regularly conducted ceremony on the site. In 2017, allies from across the province convened on the site to build a straw-bale home for those staying at the camp, which is now located on the Alton Gas site itself. Community members have also been engaged in grassroots scientific activities related to assessing the state of the river, to be better able to intervene in future environmental assessment processes.

Public statements by the company indicate that they intend to proceed with the project this year, and the water protectors expect renewed threats to the treaty camp in the spring. They aren’t going anywhere, though, and they ask supporters to inform themselves and each other about the issue, and to listen closely for future call-outs for support.

Talking Radical Radio brings you grassroots voices from across Canada, giving you the chance to hear many different people that are facing many different struggles talk about what they do, why they do it, and how they do it, in the belief that such listening is a crucial step in strengthening all of our efforts to change the world. To learn more about the show check out its website here. You can also follow them on FaceBook or Twitter, or contact scottneigh@talkingradical.ca to join our weekly email update list.

Talking Radical Radio is brought to you by Scott Neigh, a writer, media producer, and activist based in Hamilton (formerly Sudbury), Ontario, and the author of two books examining Canadian history through the stories of activists.

Next Post Making it go away: oil spills, corexit and Nova Scotia’s offshore