KJIPUKTUK (Halifax) – The Armour Group, property managers of Founders Square, have pointed to poor service to justify the termination of the janitorial services contract with GDI, causing the layoff of seven Black janitors.

This Saturday Robert Wright, a tenant of the building, wrote a letter to El Jones and Lynn Jones, supporters of the janitors, to set the record straight. “I have been in that building for several years and have never had occasion to complain about the state of cleanliness in the mornings.”

Wright wants both the Armour Group as well as one of its main tenants, the Province of Nova Scotia, to right this wrong.  See this week’s Halifax Examiner column by El Jones for much more on this topic. 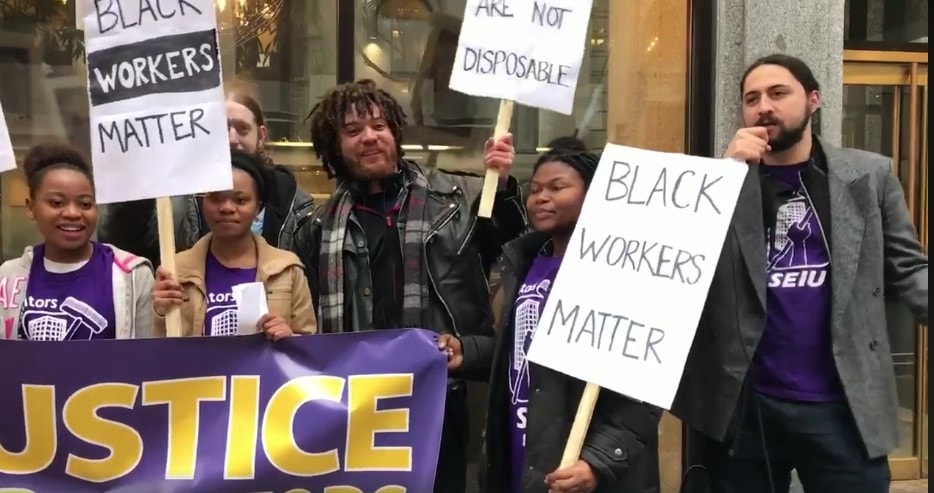 I was away this week when I heard the disturbing news of the intention of firing all of the cleaners employed by the company that currently holds the contract with Armour Group to clean its property at 1701 Hollis street.  I understand that as the current cleaning contract expires the new company intends to employ only one of the former cleaners.  This in itself is troubling, but made even more so when one realizes that the only employee they intend to retain is White and all those who will be omitted from the rehire are of African descent.  Most i believe are African immigrants.

I am particularly interested in this travesty of racial injustice because my offices are in Founders Square and I have gotten to know many of these brothers and sisters.  As a person who often works late into the evening I often encounter the cleaners as they efficiently and cheerfully move through my, floor collecting trash, vacuuming and mopping.  I have been treated respectfully by each one and have come to enjoy our nearly daily interactions.

Servant-like work is often underpaid work and sometimes those doing these very essential tasks are underappreciated or even disrespected.  I have heard that one excuse for the wholesale layoff of these employees is that there have been numerous complaints made about the standard of cleanliness of the building.  I have been in that building for several years and have never had occasion to complain about the state of cleanliness in the mornings. Remember, cleaning is done at night and we occupy and work in the building during the day.  The state of bathrooms at the end of the day is less a reflection on the competence of cleaners than it is on the buildings occupants and visitors during the day.

Another observation I would make is that when it comes to complaints about those who serve us, people feel more free to complain about the services rendered by immigrants or people of colour.  This is not only true of janitorial services, but also about professional roles as well.

Some might suggest that this matter is just about the change of building contractors and that blame and responsibility for any perceived or real injustice lies only with the company that has he new contract. Given that Armour Group is one of the City’s largest downtown landlords, and given that the provincial government is one of its largest tenants, we should expect both entities to be concerned about the treatment of the workers employed by subcontractors within their building.

As a tenant within this Armour Property I have experienced first hand their generosity and care as an institution.  As a former civil servant I am convinced of the goodwill of civil servants responsible for space acquisition and relationships with landlords.  Sadly, though, sometimes the actions of subcontractors that so blatantly affect a small group of vulnerable persons go unnoticed by building owners and major tenants.

Given the circumstances, an easy remedy to this dilemma would be for Armour Group to suggest to the new contractor to right this wrong and for the provincial government, which is a major tenant within founders square to support such an action.  The goodwill this would generate to both corporate and political interests would pay greater dividends than are currently being paid through these actions.

I stand on support of the brothers and sisters who have been serving me so faithfully.

Next Post Open letter to Minister Labi Kousoulis: We will not be silenced in our advocacy