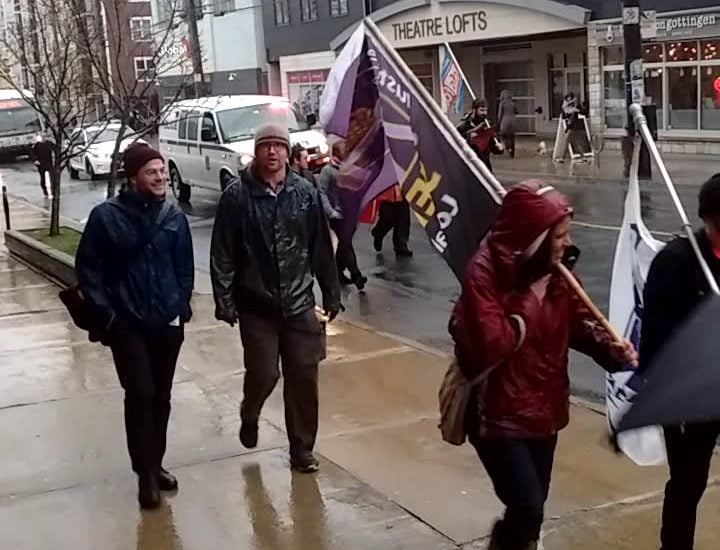 All this happened while the march was mere minutes away from its destination, the Bus Stop Theatre, where a reception was to be held. Earlier the group had listened to speeches on Parade Square, in downtown Halifax.

Here is a video of what transpired.  People are singing, and things seem pretty peaceful. Parents with children were among the marchers. Traffic is moving, maybe just a bit slower than usual.

The Halifax chapter of the Industrial Workers of the World, in a Facebook statement, offers the following account of what transpired.

The atmosphere was jovial despite the rain, as the workers, including families with young children, chanted and sang while their small group made its way up Gottingen Street. Metres short of their destination, as the group broke out into a collective singing of Solidarity Forever, the Halifax Regional Police intervened with officers on foot, in multiple cars and at least one large van, drew non-lethal weapons without provocation and physically forced the workers off the street. In response to the celebration of collective worker solidarity, more officers arrived on the scene than there were marchers, and shut down the road for longer than it had been occupied by the march.

In the escalation, two of our fellow workers were detained without cause by Halifax Regional Police. The first had complied with the orders and physical force used by the police and was on the sidewalk before being arrested. When pressed for a charge, the officer seemed to hesitate before deciding on “Breach of Peace.” Another fellow worker, challenged a different officer on the legality of their actions on Treaty grounds. The officer began to tire of the discussion, and, instead of disengaging, seemed to believe that the best course of de-escalation was to arrest her. Video shows that neither worker resisted or in any way physically threatened or engaged with the police before, during, or after their arrests.

Previous Post ‘This isn’t solved by giving somebody a bag of food.’ An interview with food insecurity expert Valerie Tarasuk