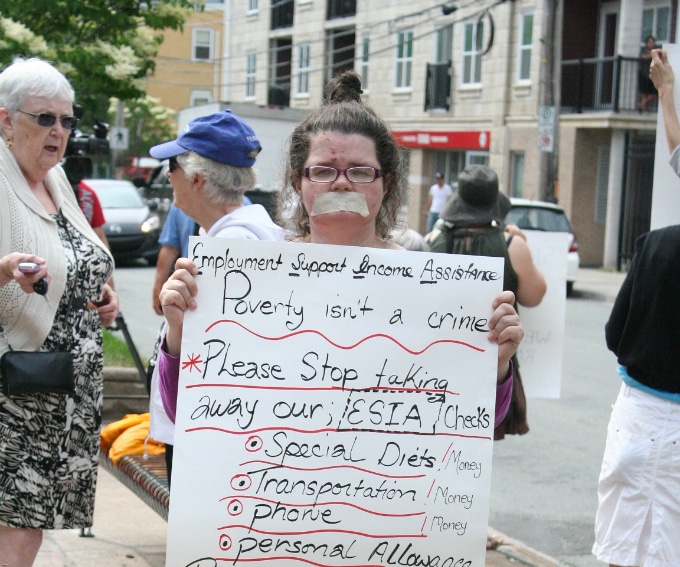 The meetings are taking place to explain a Community Services initiative to revamp the Employment Support and Income Assistance (ESIA) program.

People on income assistance are receiving a modest increase (5% for people with disabilities, 2% for all others); clawbacks for people who work have been decreased; mothers get to keep child support payments; and the poverty reduction credit is increased.

It all looks like very good news, and that is how the department has been selling the transformation to the general public. But poverty advocates and people affected by the changes have not all bought into that good news message.

Sure there are some long overdue improvements, they say, but not for everybody by a long shot. A life on welfare continues to be a life in misery.

Earlier NS Advocate reporter Kendall Worth left little doubt where he stands after attending a session in Lower Sackville.

“My general advice to any income assistance recipients who might be reading this story is, “don’t get your hopes up that a better system is coming soon.”  Basically we heard nothing new,” Kendall Worth writes in an article he filed last week.

Anti-poverty advocates Tim Blades and Fiona Traynor, who each attended a different session, also came back with less than glowing reviews.

Tim Blades, who receives income assistance and is an active member of the Benefits Reform Action Group (BRAG) went to a meeting in Lower Sackville. There were about twelve people there, he says, mostly income assistance recipients.

“They try to listen, and their intention is probably good, they do have hearts, but nothing ever comes of it,” Blades says of the senior management types who attended and moderated the information session.

Over the top positivity

Tim Blades took a bit of offense at the handouts that showed how much people will gain once the new system is in place. Tim himself expects to be ahead by something like $15 a month as a result of the raise.

“I am not pleased (but not at all surprised) at what I feel is the over the top positivity presented during the sessions. For example, that $83 a month increase is a combination of the Poverty Reduction Credit (PRC) plus the 5% monthly increase to Income Assistance cheques.

“Not everyone will get the 5% increase. Not everyone gets the PRC, and I would bet most who do get PRC once every three months cannot ration the money over that period, so it’s not realistically comparable to a monthly increase,” Blades wrote in an email.

In a follow-up phone call Blades also notes that what Community Services fails to mention is that many people who live in Halifax lost their bus pass money when the free bus pass was rolled out. Sometimes people backed into a corner used at least part of that money for food or emergencies, but that money is gone now.

At the session Tim Blades attended there was some talk about another series of meetings with people on income assistance, this time with a focus on social inclusion.

“Enough already,” he says. “You can’t have social inclusion unless the rates go up enough to live a life in dignity.”

I can’t see these change make a substantial difference

Fiona Traynor, a community legal worker at Dalhousie Legal Aid, attended a meeting in Cole Harbour, with some 20 other attendants.

Traynor is a member of the Community Agenda for Social Assistance Reform (CASAR), a broad coalition of anti-poverty groups and individuals.

CASAR wants substantial changes to the social assistance system, and an immediate increase in the rates, “enough to live in dignity, to pay for all essentials, and enable people to look beyond daily survival to participate in the community.”

As well, the coalition wants meaningful consultation with the department, something that, despite the department’s claims, hasn’t happened, Traynor says.

“I didn’t learn a  whole lot,” says Traynor. “My fundamental concern is that what people are receiving is simply not enough to live on in any kind of healthful way and with any kind of dignity.”

Three of five handouts describe scenarios about income assistance recipients with part time employment, people who will benefit because clawbacks of their earned wages will be decreased.

“Good for them,” says Traynor, “but according to deputy minister Lynn Hartwell only 11% of all recipients are fortunate enough to be able to work.”

“People don’t realize how much inflation eats up. I can’t see these change make a substantial difference in the lives of most people.