KJIPUKTUK (Halifax) – All signs point to work interruptions at Canada Post some time after July 2nd, be it a lockout of its workers by Canada Post or a strike by the Canadian Union of Postal Workers (CUPW).

There are a lot of misconceptions about the issues at play, says Tony Rogers, president of the CUPW Nova Local. The main misconception is that Canada Post is in trouble, and only aggressive cuts can save it.

“Canada Post is still a very profitable corporation, by international standards,” says Rogers. “It made $99 million in profit last year, and it made $44 million profit in just the first quarter of 2016.”

Nor are things getting worse because nobody sends letters anymore, Rogers says. Canada Post may have seen letter revenue decrease by $13 million last year relative to the previous year, but that was more than offset by a $100 million increase in parcel mail, he says.

With postal banking, everybody wins 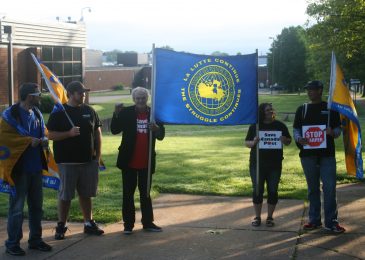 One issue that CUPW has been pushing hard is postal banking as a way to increase revenue while also improving the lives of Canadians.

“Canada Post says that it will not consider new revenue streams, even though postal banking is a worldwide phenomenon, and there is not a post office in the world that loses money over postal banking,” Rogers says.

Another issue that is important to CUPW is the disparity in pay and benefits between so-called urban and rural and suburban mail carriers, says Rogers. 70 percent of this group are women and they’re making 28 percent less than the male-dominated urban group.

These rural and suburban carriers used to be independent contractors, but they have been unionized for well over a decade now.  The work they do these days is the same as their urban counterparts, says Rogers, and they don’t necessarily operate in rural areas only. For instance, you can find these ‘rural’ workers at Dartmouth Crossings, Bayers Lake, and parts of Clayton Park.

“Canada Post is acting as if the Conservatives didn’t lose the election. People at the helm are all Harper appointees. They were asked to step down by the present government and they didn’t,” says Rogers.

CUPW would also like to see an independent audit of Canada Post and its business practices. Canada Post may be profitable, but that is in spite of its leadership, not because of it, Rogers says.

Such an audit would establish how profitable Canada Post truly is, Rogers says.

“For years the Conservatives never missed an opportunity to suggest that postal workers were being paid by taxpayers’ dollars. Nothing is further from the truth,” says Rogers.

“These are decent jobs”

“You might not have a post office in New Glasgow, Antigonish, or Sydney if it weren’t for a moratorium on closures currently in place. Canada Post wants that moratorium lifted,” says Rogers.

Canada Post would be taking jobs and the tax base it implies out of these communities,Rogers believes.

CUPW membership support for strike action at a recent vote was well over 90 percent.

During previous contract negotiations in 2011 CUPW members on rotating strikes were locked out and then legislated back to work. What’s more, the legislation also set the wage increases and duration of the new contract.

This time things will not be quite as easy for management, although there is no way of telling how things will unfold.

CUPW successfully issued a charter challenge. In April the Ontario Superior Court ruled that removing the right to strike was only acceptable in limited circumstances, and even then must be replaced by an alternate dispute resolution that is “impartial, effective, adequate and fair”.

Previous Post Op-ed: The CPP expansion is a step in the right direction for workers