KJIPUKTUK (Halifax) – Highly qualified people with deep roots in marginalized communities are being prevented from applying for positions in the redesigned provincial employment services system.

“These will no longer be community jobs. How can you get rid of the people who know their community, in an area with the highest unemployment rate in the province?”  Lynn Jones.

The Cumberland African Nova Scotian Association (CANSA), one of the organizations selected to work in the new system, has been unable to fill a vacant Employment Counsellor position, even after increasing annual pay from $43,000 to $50,000.

The problem is that you must have a Master’s Degree in order to apply. This is a new requirement believed to have been imposed by the Department of Labour and Advanced Education. No equivalency clause is in place, so even in-house applicants are prevented from applying.

To Lynn Jones, a social activist who worked in the employment field for 30 years, this suggests that the government is raising standards so unrealistically high that only the privileged in society can apply for these positions.

“You need to be good at finding people for jobs, and finding jobs for people. You certainly don’t need a Master’s Degree for that,” says Jones. “You need a person who is out there networking and scrounging.”

Jones says that these same job requirement could well stop six former employees of the Watershed Association Development Enterprise (WADE)  from applying for positions at the newly formed Careers Nova Scotia Centre next door to where they used to work. 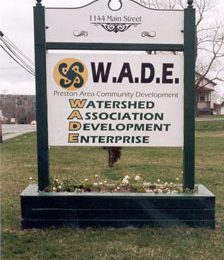 WADE had been finding employment for black Nova Scotians in the Preston and Dartmouth area for more than 30 years.

This spring WADE saw its funding cut as a result of the rationalization of provincial employment services, a move condemned as an example of systemic racism by Board members.The provincial government says it initiated the redesign to reduce administration and direct more money to front line services.

“These will no longer be community jobs,” says Jones. “How can you get rid of the people who know their community, in an area with the highest unemployment rate in the province?”

Update July 5th: In an email received this afternoon Andrew Preeper, spokesperson for the department, writes:

Through the transformation, service standards and staff qualifications became a requirement. This was done to ensure high quality service delivery for Nova Scotians. There are multiple roles in an employment centre, two of which are Career Practitioners and Career Counsellors. A few keys points are outlined below:

Career Counsellors were not previously a requirement in the service delivery model, but some centres had them. It was seen as a best practice in delivery, particularly for individuals facing multiple barriers to employment and who require more in-depth, clinical assessments and supports. During site visits last year, service providers who had Career Counsellors advised us that they felt graduate degrees were a requirement for their Counsellors to be able to do the work they were expected to do. They also told us they had trouble attracting graduate-level applicants due to the salary scale they were able to offer. We listened and more funding has been provided to organizations for those roles (as you note in your article, CANSA has advertised a higher salary). It’s important to note Career Counsellor is the only client-facing role that requires a graduate degree.

There is also the position of Career Practitioner (which most-closely matches up with what is being described by the individual in your article). This position does not require a graduate degree. In fact, we have implemented a process of Career Practitioner Certification in Nova Scotia that recognizes experience and competencies vs. education levels and achievements.

We do not see the requirement of a degree as a barrier to employment centres or staff – it is a new position and does not impact current staff. In fact, those who were previously employed as ‘career counsellors’ but who generally did not perform the duties of a career counsellor and do not have the required qualifications were able to maintain their role and duties at their current salary under the new system.

At the end of the day, we want to connect people to jobs through the delivery of high quality services, and it is key that we support best practices in delivery in order to achieve that goal. This is the entire focus of this transformation process.

Regarding individuals who had worked at WADE – 3 were offered positions with the YMCA (the service provider for that area) and 2 accepted.

Next Post Op-ed: Too many left behind. Why funding to Independent Living NS must be restored