The Steele Auto Group is cashing in on the gentrification of the North End. Over the past year, Steele quietly purchased 25 properties around its Colonial Honda dealership on Robie Street. The company has demolition permits for 20 of the properties and has started bulldozing them to make room for a parking lot.

Steele is committing a destructive act of sprawl that will erode the residential character of the neighbourhood and further aggravate the real estate frenzy that is gripping the North End. It also runs contrary to the city’s declared aim to concentrate population and commercial activity in the downtown core. So why would Steele, a conglomerate of 18 dealerships, spend millions to expand a parking lot in the urban core?

Steele is making a real estate play. Back in 2013 Hilary Beaumont reported for The Coast that the price of a detached bungalow in the north end tripled between 1998 and 2013. Similarly, the CBC reported on 15 June of this year that the average cost of rent in the district has increased by 67% since 1997. Steele stands to make a windfall profit on the land’s resale, if these trends continue.

Steele’s speculative development is symptomatic of the gentrification that is displacing working families, especially racialized ones, from the north end. Stopping this displacement requires that we name the problem of gentrification and learn to recognize its racist tenor.

Racism and the Decline of the North End

At the turn of the 1960s, the area bordered by Robie, Young, Barrington, and Cogswell streets was a mixed-use, working-class neighbourhood. The North End was modest and plagued by segregation, but its real estate thrived.

The fortunes of the neighbourhood started to decline in the second half of the 1960s thanks to federal subsidies for home mortgages and highway construction. The MacKay Bridge, Highway 111, and the Cogswell Interchange all opened in 1970, spurring decades of suburban growth. The new highway and bridge network undercut Gottingen Street’s status as a commercial artery and drove jobs to the suburbs.

Urban decline was the flip side of this suburban prosperity. Persistent discrimination in the housing and labour markets kept suburban homes out of the reach of most racialized people and concentrated them in inner-city neighbourhoods. Even worse, the city made room for roads and bridges through “slum clearance.” The city first bulldozed the tenements around what is now Scotia Square (1958-63) and later on the community of Africville (1964-67).

Racist planning consigned the North End to poverty. According to urban planner Bruktawit B. Melles, the number of properties with retail or commercial uses on Gottingen fell from 138 in 1960 to 36 by 2001. As the stores left, community groups and social service providers moved in, further channeling low-income folks into the neighbourhood. To this day, a mix of racism, poverty-shaming, and sensational reporting discourages lenders and developers from investing in certain parts of the district.

Just last year, developer Jason Ghosn appealed to city council to change the address of his new condo development from 1901-03 Gottingen Street to 5447 Rainnie Drive. Ghosn claimed that the Gottingen address would “adversely affect the marketability of his development.” The subtext of Ghosn’s appeal, as Stephen Kimber has noted, is that Gottingen is still coded as a “public-housing-social-service-drug-addled-boarded-up-and-well…black district.”

The North End as a “Relief Valve”

The city of Halifax abandoned the North End in 1979. That year, the city prepared a draft rezoning of the northern part of the peninsula promising to revitalize the community. The project was never completed and the neighbourhood was never comprehensively rezoned. Why?

Melles observes that planning neglect is a legacy of the city’s “relief valve” strategy. Halifax’s Director of Planning and Development in 1988 explained the “relief-valve” as follows;

Gottingen Street may, in the future, act as a relief valve for the Central Business District (CBD)…As land prices rise in the CBD and Spring Garden Road areas and as land becomes scarce, the lower land values and availability in the Gottingen Street area may shift development in that direction.

In other words, the city decided to allow real estate prices in the area to degrade to such a point that they would tempt developers back in. Zoning restrictions threatened to complicate re-development. The “relief-valve” approach excused the city of any obligation to reinvest in the neighbourhood and absolved planners from thinking about the relationship between suburban growth and inner-city decline. It has also destabilized the neighbourhood.

Even now, many of the side streets off Agricola, Robie, and Bloomfield are zoned for general business use. This wild west of zoning categories makes it possible for Steele and others to buy up homes and replace them with all kinds of commercial and light industrial uses. Not a single property below affluent South Street is similarly zoned.

“They were all Crack Houses:” Steele’s Appeal to Slum Clearance

Steele is well aware that its land-grab runs counter to the city’s densification agenda and has redirected attention by appealing to racist and elitist notions of slum clearance. In a 29 April email to the CBC, Steele President Dave McRitchie claimed that “many of the rental properties we have acquired had a high vacancy rate, and several have bylaw citations for appearance.”

Neighbourhood businessmen are less subtle about poor shaming. Antique store owner Greg Hayes, for example, told Vice on 30 May that “I’m happy to see all those rat-infested houses go, they were all crack houses, grow-ops, buddy selling pills or whatever. Now somebody’s gonna do something positive and get rid of them.”

Whatever the state of the properties, it is appalling of Steele and Hayes to suggest that slum clearance is “something positive.” Slum clearance is a social trauma that displaces rather than solves inequalities. It is a mark of how little things have changed since Africville that Steele has openly bragged about “cultivating a new upscale look along Robbie Street.”

Neither Steele nor any other company should be able to buy-up a city block and engage in privately-directed “slum-clearance.” Major developments should be subject to public deliberation because what is good for the developer is not always good for the neighbourhood. Steele’s parking lot, for example, will lower the property values of some neighbouring homeowners and raise the property values of neighbouring businesses. These ripple effects are unfair and need to be carefully weighed. So how is Steele getting away without having to submit to public consultation and democratic approval?

Councillors Jennifer Watts and Waye Mason, Mayor Mike Savage, recently-retired MLA Maureen MacDonald, and MP Andy Fillmore have all expressed concerns about Steele’s demolition plans, but all are insistent that the city lacks the power to halt the project because the land is zoned for general business use. Since Steele does not need to ask for a zoning change, there is no democratic check on its project whatsoever. But while the politicians are technically correct about the limits of the city’s authority, they are remiss for failing to reflect critically on the shortcomings of the development system.

As Stephen Kimber pointed out in a 17 May editorial for Metro, planning law privileges developers’ property rights. The basic problem is that urban plans and zoning regulations do not have legal status as a hard and fast rules. They are guidelines only. Planning law is designed to allow developers to routinely seek and receive exemptions. On the other hand, the planning law regime vigorously protects developers from infringements on their property rights makes it virtually impossible for citizens to stop projects that run contrary to the spirit of urban plans. Planning laws are made to be broken, but only in one direction.

Both the much-vaunted rezoning initiative of the Centre Plan and councillor Watts’ proposed Interim Development Controls, which would give the city the power to temporarily suspend controversial developments, are toothless. What is needed is a change to the Municipal Government Act and other connected legislation. The city should have wide powers to revoke demolition permits for projects that do not conform to the urban plan. No politician at city hall is even considering such a power. Nor should we expect municipal officials to bite the hands that feed them.

There are currently no campaign donation limits or conflict of interest restrictions in Nova Scotia’s municipal elections laws. A 2015 CBC news investigation found that one third of all donations to sitting councillors during the 2012 municipal elections in Halifax came from companies directly involved in development. Mike Savage, for instance, received $5,000 from the Steele Auto Group for his successful mayoralty campaign. The rot goes deep.

There is a revolving door between city hall and the development industry. Richard Butts, Halifax’s Chief Administrative Officer, left his post in January to become president of Clayton Developments. Clayton is the developer behind the 1.5 billion-dollar Parks of Bedford West project, which is projected to house 20,000 people. Butts’s departure, as Jacob Boon reported in The Coast on 17 March, highlights both the absence of stringent conflict-of-interest rules for city staffers and of a municipal lobbyist registry. It should come as no surprise then that most councillors side with those whom they are supposed to regulate when the interests of developers and citizens conflict. 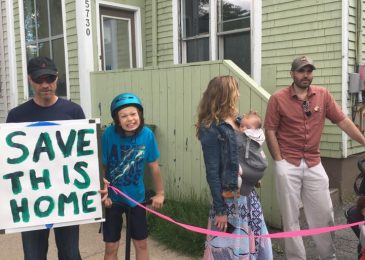 The development industry and the political establishment are once again remaking the city in ways that profit themselves. In the 1960s, the state pushed through a suburban development strategy which subsidized the white suburbs by impoverishing black and poor residents in the inner city. The urban crisis that followed was of little concern to city planners. Racism kept North End real estate prices in the basement for decades. The current land rush only began after the neighbourhood started to whiten. The development industry now threatens to displace the neighbourhood, block by block, until both the last public housing unit and single family home have disappeared. The only way to avert this real estate “correction” is for residents to link their separate struggles against displacement into a common front against gentrification.

Solidarity will not be built by ignoring how racism continues to structure the real estate market. North End city council candidate Brenden Sommerhalder recently replied to a question about the need for a more diverse city council by saying, “I definitely would be half the median age of council, so for me that would be one form of diversity.” Equating the marginalisation of youth with that of racism is a singular act of obliviousness. Such flippancy demonstrates the wisdom of outgoing Councillor Jennifer Watts’ recent lament that the council is too white, old, and male.

Speculators like Steele have a keen appreciation for the dynamics of race, space, and class. They use this knowledge to pit residents against each other and manipulate the real estate market. To preserve the communities of the north end, a coalition of Black and white residents, students and working families, renters and homeowners, have to unite around their common opposition to rising real estate prices. Solidarity means demanding a mix of aggressive rent controls, public reinvestments in social housing, and democratic planning powers that are strong enough to fend-off speculators. Only through solidarity can we confront the power of the development industry.

Mark Culligan is a member of Solidarity Halifax`

Previous Post Op-ed: Too many left behind. Why funding to Independent Living NS must be restored

Next Post Rent strike. Public housing tenants are tired of waiting for repairs