Transcript of  speech by Hannah Mills during an August 2016 rally outside a Liberal fundraiser on Gottingen Street hosted by MP Andy Fillmore, and with federal environment minister Catherine McKenna as the guest of honour.

My name is Hannah Mills and I’m one of the organizers of this event tonight. It’s been thrown together by a group of individuals here in Halifax who felt the need to mark this moment. Thank you all for coming. I’d also like to greet Catherine McKenna, Minister of Environment and Climate Change, and Andy Fillmore, our Halifax MP and chair of the committee on Indigenous Affairs. 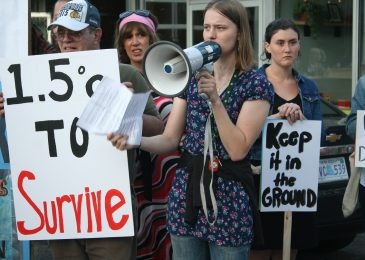 While this is a peaceful protest, we are demonstrating with awareness of the urgency of the time in which we live.

Andy Fillmore and Catherine McKenna: you are both well aware of the urgency of the climate crisis, of the need for reconciliation on these lands, and of the desperate suffering created when we neglect one another and our natural world.  You are aware, you know, and you have choices to make.

In April, Trudeau signed the Paris Agreement, in which Canada agreed to limit global temperature rise to under 1.5 degrees celsius. This is the threshold of warming beyond which scientists predict catastrophic climate change.

This year has seen devastating wildfires – Fort McMurray in flames, shattered heat records and mass deaths in India and the Middle East. And, just within the last few weeks, it’s seen the drinking water – the life source – of Prince Albert and North Battleford poisoned by the Husky Oil Spill.

And today? What’s happening today? The National Energy Board has begun its review of Energy East.

I wanted to attend tonight’s benefit because I had a question for Catherine McKenna:

The cost of the benefit was $125 – too much for me to afford. I told Andy Fillmore this, and, a couple of days ago, his office offered me two free tickets.

This morning, when they learned I was organizing this demonstration, they retracted the offer of the tickets.

This is unfortunate to say the least. 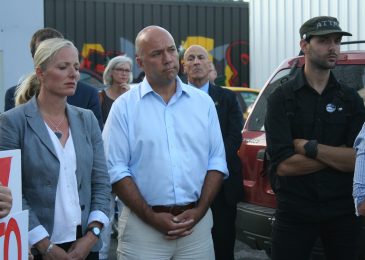 What we are doing out here is not even dissent. We are not asking for anything which you [Liberals] haven’t already promised. You made the commitments, you signed the Paris Treaty, you made the promises.

This –  what we’re asking for out here – this is sanity. We say no to pipelines. We say keep it in the ground. To do otherwise is untenable.

That’s all I need to say. We know what we need to know, we know the solutions – and you have some choices to make.

Next Post “I will never say we’re done.” An interview with Jason MacLean, NSGEU President