KJIPUKTUK (Halifax) – The Muskrat Falls power generation project in Labrador will directly impact the quality of life of Inuit and Innu who live in the area. Indigenous peoples will see their lands flooded, and others living downstream are facing the threat of methylmercury poisoning. 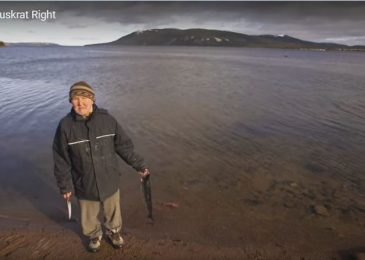 That’s serious stuff. But it’s not widely reported in Nova Scotia, which stands to benefit from the massive power generating plant through the Maritime Link. More surprisingly, that news blackout applies to a large extent to Newfoundland as well.

The Independent, a Newfoundland and Labrador online publication is one exception. Its reporter Justin Brake has traveled to the area and has done some excellent reporting on the situation on the ground.

There is lots going on in Labrador, and Nova Scotians should pay attention, Brake tells the Nova Scotia Advocate.

There had been an abundance of coverage on Muskrat Falls over the last years, but a lot of it has focused on the economics of the project, Brake says. However, the relationship between the development and local indigenous rights remains unexplored.

The threat of methylmercury poisoning is one such issue that has recently come to the fore.

Independent researchers from Harvard University, Memorial University in St. John’s, and the University of Manitoba have raised the alarm about the accumulation of methylmercury downstream from the Muskrat Falls development.

Particularly at risk will be Lake Melville, a large body of water surrounded by Innu and Inuit communities.

The study suggests that if the proposed reservoir is not fully cleared of vegetation people will be forced to relinquish traditional food sources, such as seal, fish and waterfowl, that they relied on for thousands of years.

Both Nalcor, the provincial corporation spearheading the development, and the provincial government, are unwilling to consider the report’s recommendations.

Media silence is a manifestation of colonialism

Brake sees plenty of evidence that indigenous voices are being ignored in most Muskrat Falls reporting.

“I was doing a bit of research, so I looked at a story this last summer as it was reported by local media outlets,” says Brake.

The published photos show members of the Innu community, who are title holders to the land, yet the media reports never once mentioned that these protesters were Innu. In fact, the protesters remained nameless.

“Six protesters had blocked access to the Muskrat Falls site, and they were arrested and taken away. The published photos show members of the Innu community, who are title holders to the land, yet the media reports never once mentioned that these protesters were Innu. In fact, the protesters remained nameless,” he says.

This shows a deeply embedded colonialism and racism in our local media. This is a huge story, and the media have the obligation to report it accurately,” Brake says.

Nova Scotia stands to benefit from the Muskrat Falls project as well. A large portion of the energy generated at Muskrat Falls will be transported to our province via the Maritime Link

“We should know where that energy comes from when we turn on our lights,” says Brake. “Nova Scotians need to know that there is a significant environmental and human cost associated with the project. In a time when there have been such significant advances in wind and other renewables we don’t need to build this dam.”

“The silence is an indication and a manifestation of colonialism. It’s more convenient to look the other way, and forget about the negative impact on indigenous rights,” Brake says.

Supporters of the Independent have organized an online auction to allow Brake to continue to travel to Labrador in order to write his stories.

“I head back to Labrador tomorrow and I will continue to talk to locals. There is a protest happening on Friday,” says Brake. “The fundraiser will determine how much continued coverage we can do. At this point in time we are the only media providing consistent coverage.

Much of the donated artwork and jewelry is stunningly beautiful. Many of the pieces are made by Mi’kmaw artists living in Newfoundland.

“It’s heartwarming to see this support by the Mi’kmaw community on the Island. They are just as distanced from the happenings in Labrador as anybody else, but it is the Mi’kmaw artists and crafters that are the first to step up to the plate. That was amazing, and I am very grateful,” Brake says.

The true cost of Muskrat Falls. Methylmercury and environmental racism.

Fair trade and the Maritime Link. An interview with Deborah Stienstra of FemNorthNet.

Visit the website Make Muskrat Right for more information and to sign a petition asking provincial and federal leaders to act on the new information uncovered by the Nunatsiavut government.

Next Post Op-ed – We need to fix sick leave provisions for workers in Nova Scotia, not take them away