KJIPUKTUK (Halifax) – Consider the following quote and guess what province it is about:

Income security is supposed to provide a safe support for those with nowhere else to turn. It doesn’t. Many (welfare) recipients go hungry. Their income is so low that many recipients are forced to rely on the help of charities like food banks to get enough to eat.

Shelter allowances don’t come anywhere close to reaching the actual costs of rents… As a result they subsist in the most unhealthy, unsafe and inaccessible accommodations.
Today, individuals who rely on these supports are living in the deepest poverty in society.

If you thought this was about Nova Scotia you were both right and wrong. 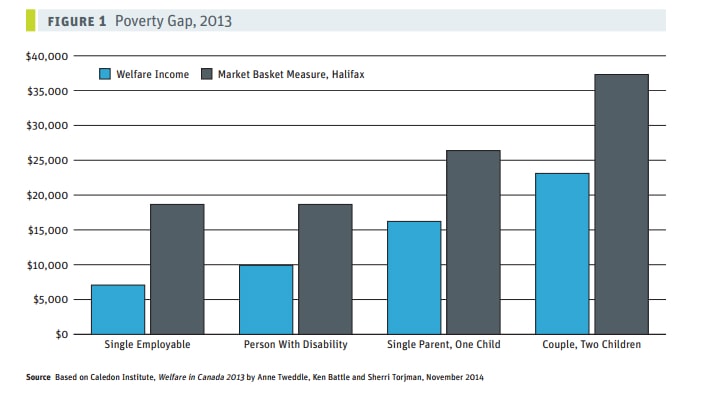 It perfectly describes the fate of people on social assistance in Nova Scotia.  But the quote is actually about Ontario. It’s from a brochure by an Ontario anti-poverty group called Fix the Gap.

It is in support of a private member bill that they believe will help fix a social assistance system that is as broken in Ontario as it is in Nova Scotia.

The Bill would cause social assistance rates to be based on the actual costs of things like food, rental housing, clothing and other essentials.

Nova Scotians on social assistance live as much as 40% below the poverty line, and meager and rare rate increases don’t keep pace with rising food costs.  The shelter allowance hasn’t substantially increased for decades.

Joanne Bernard, the minister of Community Services, has suggested that any changes in welfare rates must wait for an organizational transformation to be completed. What little information about these proposed changes seeps out does not include a raise in rates however.

Ontario’s Bill, proposed by Hamilton East — Stoney Creek MPP Paul Miller would establish an advisory group — the Social Assistance Research Commission — to recommend welfare rates specific to each region of Ontario based on the actual cost of living there.

There is an obvious flaw. Recommending rather than setting rates leaves lots of wriggle rooms for politicians. But it would be big improvement over the current process if Nova Scotia were to adopt something similar.

“It creates a non-political body that includes people with lived experience on social assistance who will base social assistance rates on regional, specific cost-of-living evidence,” Miller told the Hamilton Spectator.

“It’s evidence-based as opposed to political will, and I think that’s crucial to being more realistic about what’s going on in the province,” Miller said.

In Nova Scotia political will clearly hasn’t cut it.  Ontario’s Bill 6 makes a lot of sense.