Fifteen years ago, after four years of visits to the area,  Montreal native and celebrated and prolific Canadian writer Noah Richler and his publisher girlfriend Sarah MacLachlan bought a small property in the village of Sandy Cove on Digby Neck. He says that the purchase set them on their matrimonial way and the family has been “terrifically happy” there ever since.

They do not yet live there full time but visit year round and he says it’s where he does his best writing. To cement their plans to settle there full time, the pair bought also an historic inn in the village intending to create an artist colony one day.

This Souwest Nova homing instinct might account for Richler’s itch in 2015 to run as an NDP MP candidate in West Nova. That impulse set him on a rough-and-tumble ride on the Canadian election roller coaster that Richler describes in a recent bright, thoughtful and often gossipy political memoir, The Candidate: Fear and Loathing on the Campaign Trail (Doubleday Canada, 378 pp )

Richler even consulted NDP star Megan Leslie about his plans and was warned off running in West Nova. The Dexter government had killed the Yarmouth ferry and left the region in a mess. She thought he couldn’t win there. The candidate then accedes to the NDP party decision to have him run instead in Toronto-St. Paul’s, where the party expected to “run to lose.”

It can’t be any easy row to hoe for someone who appears to be the smartest fellow in any room, and probably less easy when he is pretty sure he really is that fellow. Such is the case for Noah Richler, when this becomes apparent in the bright, thoughtful and often gossipy political memoir.

Richler’s self-admitted hubris – including the decision to challenge a long-standing MP – is evident throughout the book and is something that both unhinges him at times and, at others, is his salvation.

The candidate describes in some detail his negotiation with NDP party stalwarts about running instead in the Toronto-St. Paul’s riding, where, because it is also the riding where Liberal Carolyn Bennett has served since 1997 and any NDP prospect was thought to have little hope of winning, he was asked if he would “run to lose.” 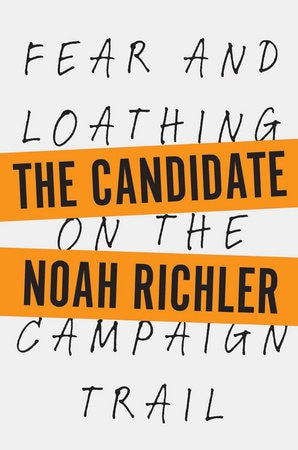 Richler’s capacity as a journalist and his keen eye for social and political nuance make for an enjoyable and informed read, filled with plenty of personal and political dish on the inner workings of a federal campaign. I have to admit also to being charmed with the author’s ability to be both in the fray and above it as an observer, even if at times a not-so-neutral one.

Even before the seminal event of Omar Khadr getting bail in May of 2015, the author-turned-candidate admits to musing for at least two years about “a life in Ottawa” and had discussed it with close friends and wife Sarah, who much to his surprise said, “Run. You should. You need to.” He was off to the races.

After pitching his hat in the NDP ring, Richler is anxious at not hearing back from the party for more than two weeks. One of the most serious people I have met, the author/candidate is also prone to fits of delicious humour throughout The Candidate.  After describing the probable vetting “selectors” in the Conservative and Liberal parties as likely wearing broad ties over heavily starched shirts under three-piece suits or being “fierce-looking women dressed for power in the wings… with not a ripple of fat on any of them,” he describes in a loving way the room of  ten NDippers who were vetting his nomination as something from a Bill Murray comedy; a ball team of “misfits and perennial losers” where the pitcher can’t pitch, and the rest of the team are overweight, blind or in wheelchairs.

Again, he’s off to the races. With $350 in the bank and serious doubts about the enterprise.

The Candidate describes with some touching detail the negotiations with party central, the creation of a campaign team, the joys and drudgery of precinct walking and the frustration of being stuck between the party line (or Tom Mulcair’s) on issues and his own well-formed ideas of where a responsible party would stand. Richler is maddened by some of the pettiness in political races, especially at a neighboring candidate’s hosting a bar-b-que in Richler’s riding, poaching badly-needed funds from his shoestring campaign’s paltry coffers.

Some of the more engaging parts of the book are Richler’s day-to-day interactions with the NDP “machine” hierarchy and with other candidates at public and media events. I got the sense throughout the book that his native intelligence – what makes him such a valuable part of the contemporary Canadian landscape – is constantly being held in check.

As someone whose earliest opinions were staunchly defended at the dinner table of his literary lion of a father and whose persona and profession have been based on formulating and publishing strong opinions about important current issues, Richler’s journalism, Facebook and Twitter histories were subject to great scrutiny. His past ideological “transgressions” were made problematical when thrown up at him via opposition research passed on to journalists. It is in his responses to the concomitant accusations – and his negotiations with senior party bureaucrats about what, if any, apologies should be forthcoming – that the strength of his convictions, character and intelligence shows.

This push-and-pull is made all the more clear in the internal tussle about the Richler campaign’s decision to compensate for the lack of party media advertising in Toronto by creating a series of smart and satirical campaign videos. Much to his displeasure, party bosses nixed some of the ads, but the ensuing debate is worth the price of admission.

Ultimately, toward the end of the campaign and after what he calls a “wave of bad news”, Richler comes to the realization that the NDP is about to lose and to lose badly. In his riding, Carolyn Bennett got well over three times the votes of Richler and the Conservative candidate and polled twice his numbers. The entire country was awash in red.

In the end, we Canadians are not treated to MP Noah Richler humiliating MP Chris Alexander on the floor of the House, as the author himself has imagined in his introduction. Instead, we all benefit by having at hand a thoughtful and humorous glimpse into the private and hidden machinations which create the very public platform of democracy we all depend upon. A great bargain, I think.

Parts of this review were published in LocalXPress, Tri-County Vanguard and South Coast Today.

Timothy Gillespie is a Winnipeg-born writer whose home is now in West Middle Sable, Shelburne County. He is publisher/editor of online news portal, SouthCoastToday.ca and is days away from launching BestofNovaScotia.com, a portal for exporting “cool stuff” from Nova Scotia.