KJIPUKTUK (Halifax) – At Thursday’s leaders’ debate at Saint Marys’ University, a few exchanges stand out as being a bit more informative than I’m sure the leaders planned.

When talking about their visions for the future, each man revealed their primary values. These values matter when choosing the next government. Our values are the baseline lens through which we assess the world and make our decisions, and our values are rarely adjustable. They are revealed by what we say and do, whether we are consciously aware or not.

My own values are integrity, vision, psychological health, and ecological sustainability – including how humans rightfully fit in that ecology.  I use these values to assess leaders asking for the privilege to make decisions for me. 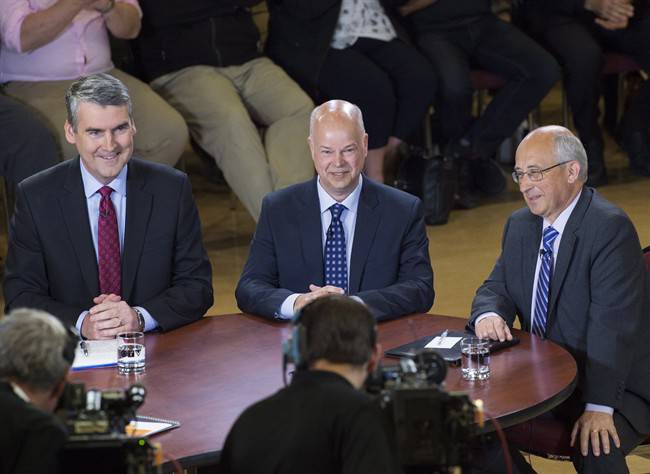 Stephen McNeil’s priorities are centered around the need to live within our means. He tells us that growing up in a family with 17 siblings, he learned to consider the impact on everyone for his decisions. He doesn’t want his grandchildren to have to pay for perks for current public sector employees.

We have seen Mr. McNeil in action asserting his values, and it’s not pretty. He has a vision of equality and fairness for all working citizens, but he doesn’t recognize his focus on equity is dangerously centered on finances alone at the expense of human relationships and individual and group needs.

Jamie Baillie stopped me in my tracks a couple times. He wants to leave his children hospitals and roads.

Like McNeil he believes that public sector wages need to be leveled out, but he says he would negotiate differently. Nevertheless, although he talks a good talk about respecting the humans involved, his basic values distill down to leaving a solid infrastructure in place for our children.

Of course that infrastructure won’t last for our grandchildren. It will have to be upgraded again before they get to use it. So although he talks about a vision for 10 years, his vision is still temporary because he values impermanent structures.

Gary Burrill is certainly folksy, and to people who value financial restraint and concrete infrastructure that may suggest he’s not well enough informed to lead the province.

Burrill’s values are centered on people and ensuring they have secure shelter, meaningful work, adequate income, and accessibility to health care. He also expects people who have income advantages to relinquish a little more to help provide for others less fortunate, to lift them up.

So as I heard it last night, Stephen McNeil values the concept of people paying their own way. He will restrain wages for public sector workers but will not require the wealthy to give up more of their earnings to bring them down to size. And the people who need more financial assistance will just have to wait until our society gets better, because there’s only so much a government can do.

Jamie Baillie wants to listen to people, and keep up the conversation for as long as possible and build roads and hospitals and let communities decide if they want to contaminate their environment with fracking.

Perhaps you should attend the NS Child Care Association conference at the Westin in Halifax on June 2 and 3.

Early Childhood Education was my 1st career, and it was the most meaningful education I could ever have received. It taught me how to provide for and nurture healthy human beings.

A response like Baillie’s suggests that the people making the decisions for all of us still don’t understand that the most important decisions we make provide for the healthy development of our children. When we don’t do that, we create a society of adults with blind spots.

Gary Burrill gets that healthy, secure, respected people are the most important infrastructure upon which to build a society.

If we don’t put people first and that includes providing for safe shelter, purposeful contribution, support from society when needed, and food in their bellies, the other priorities are superficial.

Mr. McNeil: Your grandchildren will not be able to eat money. They will need relationships with healthy people living in a healthy environment.

Mr. Burrill: Your grandchildren may have a chance to live in a world built by healthy people if we ensure their basic needs of safety, security, belonging and love are met. Only then will we have the resources to be able to achieve our potential.

By the way, I’ve already voted, and not for any of these folks. If they were my only option, I’d vote for Mr. Burrill because his values correspond most with mine.

Who will you authorize to make decisions for you?

“Where there is no vision, the people perish.”

When healthy people and a clean environment are the vision, we have a sustainable chance.

Elizabeth Perry is a speaker and counsellor who promotes intrapersonal and interpersonal health for the benefit of people and planet.

Next Post We will stop Alton Gas. A new poem by El Jones