We will stop Alton Gas

All these corporations do is go around and frack
All these politicians do is scratch each other’s backs
And they sit around and laugh
While they count their stacks of cash
While they poison all the rivers and turn mother earth to ash
And police be on their side as they turn the world to trash
And there’s media on their side posting misleading photographs
When the people rise en masse
And say no you won’t trespass
They can put people into prison
Arrest them and harass
Well they can kiss some treaty ass
From Elsipogtog to Stewiacke
This is the territory of the Mi’kmaq
And you know that’s just a fact
So no they won’t extract
No government contracts
From Grandmothers to warriors
We will stop Alton Gas!
Nature does not belong to you
Been true before 1752
And it was just as true back when
Mi’kmaq got rid of SWN
Against the thumpers and police
Elsi beat the drum for peace
Women waving feathers
Til the fracking had to cease
And now they’re bringing out the salt
A Mother Earth assault
Dumping brine into the river
And that’s why they have to halt
Pipelines leaking into water
Then they say it’s not their fault
They got money in the vault
They think they run the court
But all of that is nothing
When the people bring support
So their pipelines will not pass
No toxins in our water air or grass
No children drinking poison
From our rivers wells and taps
So we’ll push them off the map
For the salmon, cod, and bass
From Grandmothers to warriors
We will stop Alton Gas!
There’s another way to be
We can live in harmony
There’s a third eye way of seeing
That these oil execs don’t see
There’s a better way than oil
And chemicals in soil
Or signs on reserves reading
This water has to boil
Or making future generations wish
That they’d ever seen a fish
We ain’t standing for that ish
The people can resist
No more species all erased
There’s a better way than waste
And it’s up to us to look
Our grandchildren in the face
And say we went and stopped the drills
Their caverns didn’t fill
We stood up to the government
And their rulings and their bills
And it doesn’t happen fast
But their power will not last
Grandmothers, Allies, Warriors
We will stop Alton Gas!
And the rivers will still flow
Alton Gas has got to go
And the medicines will grow
No drills beside our homes
And it’ll be like they never been
When the water’s running clean
No more benzene and xylene
We want an earth that’s green
And there will never be consent
To twist the world and bend
Check the language of the treaties
That’s never what they meant
Activism’s just the rent
For the time on earth we spend
People here to represent
Unity is strength
So you can tell the parliament
CEOs and presidents
Every time you try destruction
The people will prevent
Block courthouses and bypass
The nations will hold fast
Grandmothers, children, warriors
We will stop Alton Gas!
Mother Earth will win the struggle
We will stop Alton Gas! 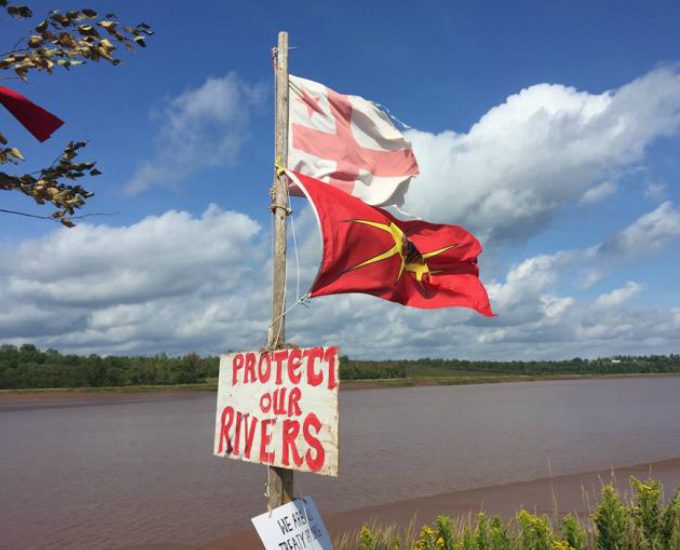 This brand new poem by Halifax spoken word poet, activist and teacher El Jones was performed tonight at the fundraiser for the fearless land and river defenders who are resisting Alton Gas, an event held at the Mi’kmaw Native Friendship Centre in Halifax.

If you would like to donate some money to this cause you can simply send an e-transfer to grassrootsgrandmother@gmail.com. Or you can commit to a more regular donation here.

We will stop Alton Gas reproduced courtesy of El Jones. For many more great poems see her collection Live from the Afrikan Resistance. I know for a fact that Bookmark on Spring Garden Road has copies on the shelf.

Next Post Walk in our shoes for a month! People on welfare rally in Joanne Bernard’s constituency