KJIPUKTUK (Halifax) – Today I am reviewing two new board games unlike any you’ve ever seen. First we look at Co-opoly, think Monopoly for people who for people who rather cooperate than compete. Next we look at Rise Up: The Game of People and Power, where the purpose is to build a social movement and beat an oppressive system. 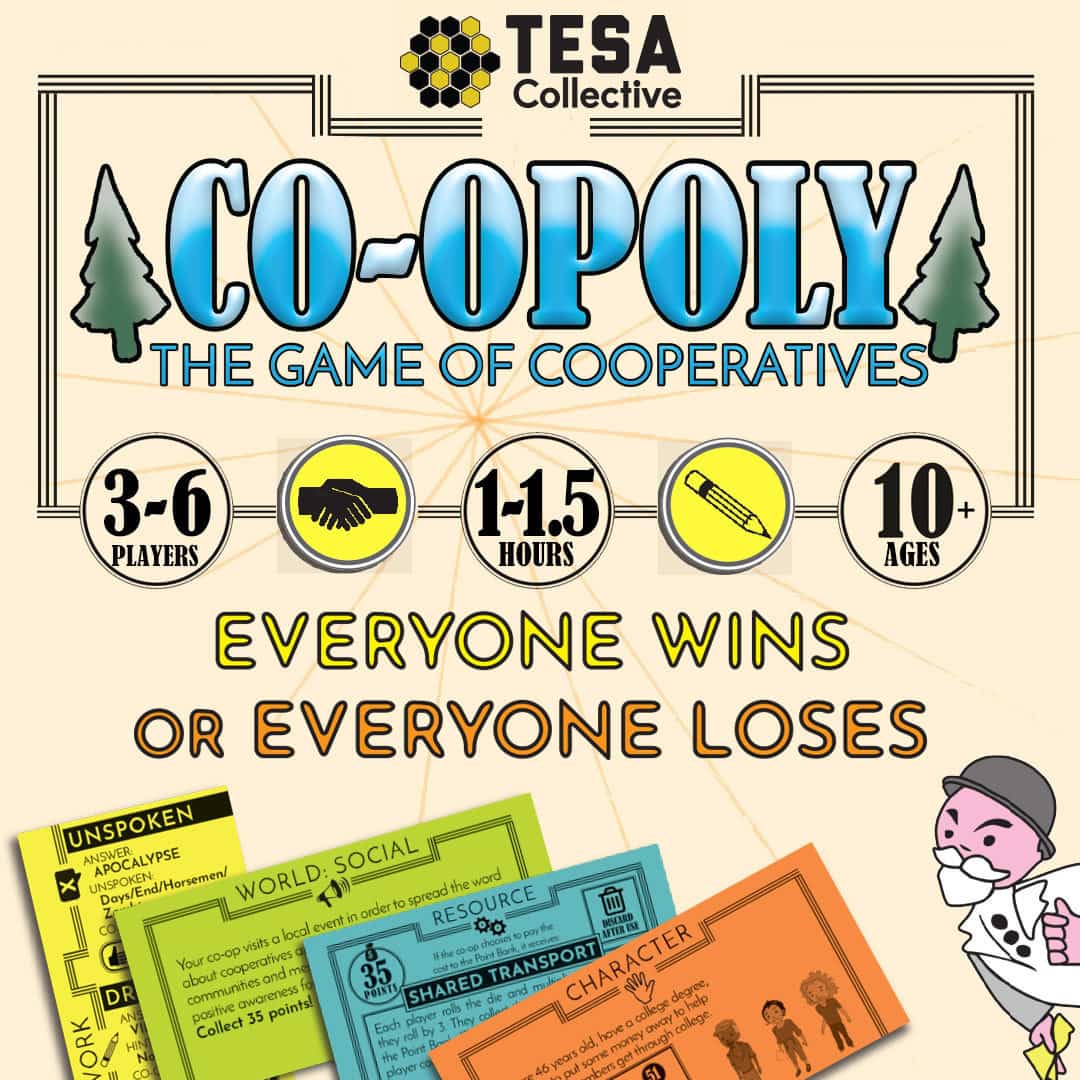 In 1928, after several decades of hardship in the fishing, mining and agricultural sectors of eastern Nova Scotia, St. F.X. University established the Extension Department, led by Father Moses Coady. The Extension Department would later sponsor the social and economic movement known as the Antigonish Movement.

The Antigonish Movement’s goal was to address the extreme poverty caused by the way certain coal mining and fishing companies exploited their workers.

The movement  focused first of all  on adult education in order to teach people in rural communities how to become self-reliant so they wouldn’t have to keep relying on big corporate money.  Well over 1000 study clubs with some 10,000 participants altogether were formed, where members would learn about the factors that kept them in poverty and how to build their own self-sufficient local institutions.

If Moses Coady were around today, I’ll bet he would be a huge fan of the board game Co-Opoly.

Produced by the Toolbox for Education and Social Action (TESA) and originally released in 2012, Co-Opoly is, as the name suggests, a cooperative board game where everyone wins or everyone loses.  The object of the game is to start a cooperative business or organization, survive as individuals, and develop a cooperative economy.

There are four kinds of cards that can be drawn during the game.  World Cards are events that can positively or negatively impact players or the co-op, such as sickness and new business.  Resource Cards are items the co-op can purchase, such as new equipment or healthcare.  Challenge Cards can be major opportunities or obstacles.  Work Cards are how the co-op earns points from the Point Bank, the game’s currency.  The co-op’s points belong equally to all members, and every player must agree on how they should be used.

Co-Opoly is more than just a board game….it is a strong educational tool.  It can help the players learn how to survive as individuals and as a group in the face of challenges of all types.  The game also teaches players how to democratically make decisions on challenges that could contribute to the success or failure of their co-op.

So while Monopoly might teach players how to be like Nova Scotia billionaires John Bragg or John Risley, Co-Opoly can teach them how to be like Moses Coady!

But Co-Opoly is far from the only interesting product TESA has.

Last year, TESA released another game, Rise Up: The Game of People and Power. It’s another cooperative game where everyone wins or everyone loses, here players build a social movement and take on an oppressive system, even when all the odds are stacked against them.

In this era of austerity economics in Nova Scotia, protests by teachers, film workers and public servants, and of course the numerous protests in response to Donald Trump’s presidency, this board game is exceedingly timely. 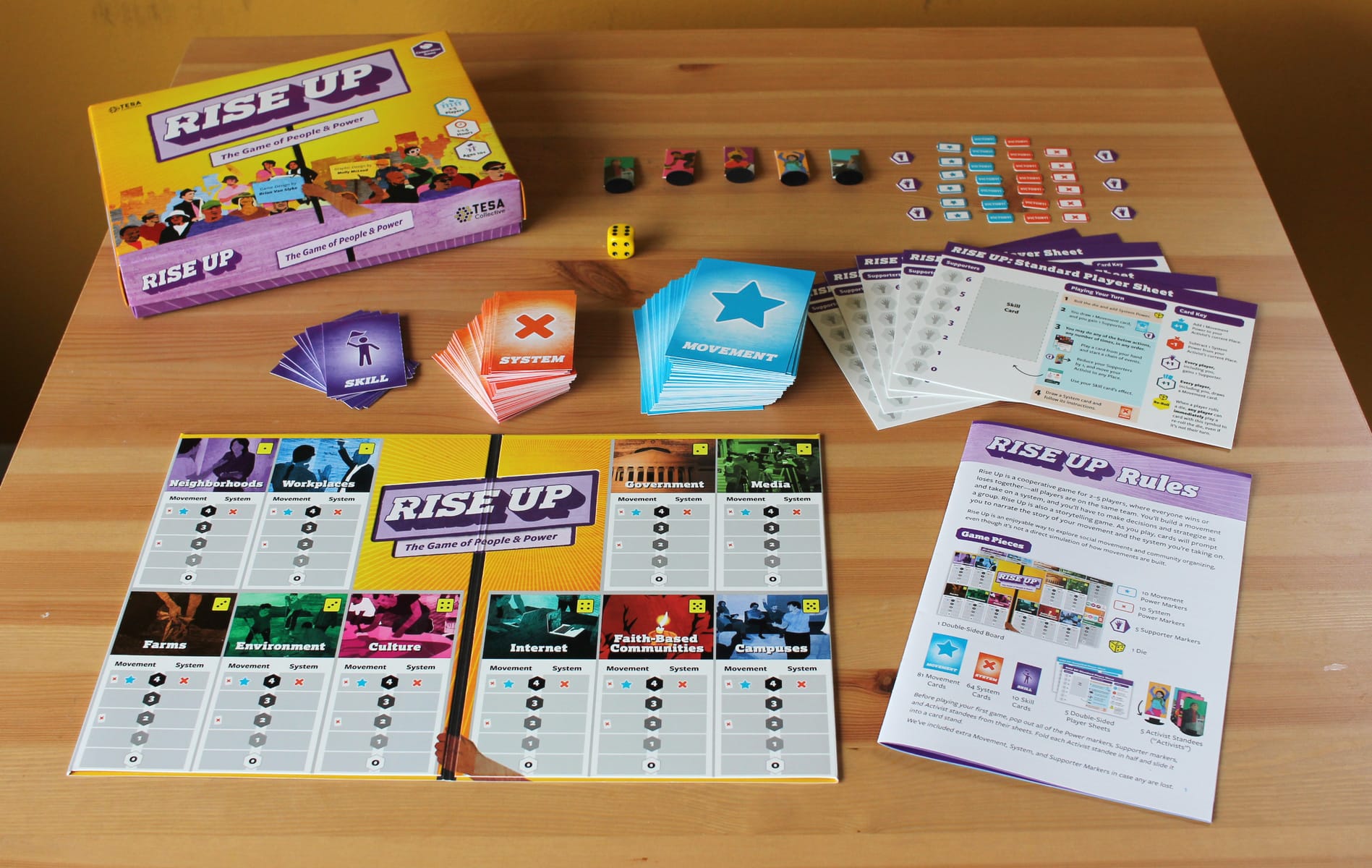 There are two versions of the game, printed on a double-sided game board.  There’s Rise Up Standard, and Rise Up Simplified for younger or less-experienced players, and for educational settings.

Players first decide on a movement, which can be serious or silly.  As the game progresses, various cards serve as narration for the story of the players’ movement.  There are three kinds of cards: Movement Cards, which help you take on the system and build your movement even more; System Cards, which show how the system is fighting back against you; and Skill Cards, which describe necessary skills that help your movement.  Players have to gain supporters in order to play the Movement Cards, and the System Cards will make them lose supporters.

The object of the game is to grow the power of your movement in as many different places on the game board as possible.  If the movement scores enough victories, everyone wins…..but if the system scores too many victories, or if any players lose supporters, everyone loses!

In addition to the main game, there are three digital expansion packs: Dystopian Futures, Hidden Agendas, and Shock to the System. Dystopian Futures is a version set in the future, with an even more oppressive system to confront in a frightening world.  It features three new sets of cards: Dystopia cards, Mission cards, and Specialty cards.  Additionally, the world in which this version of the game takes place is one that’s not completely unimaginable.

Hidden Agendas is a version of the game that’s only partially cooperative.  Here, some players win while others lose.  There are two components: Agenda cards and Strife cards.  Agenda cards feature agendas that players need to complete by the end of the game in order to win, and Strife cards increase tension and pit players against each other.  This version of the game can serve as a warning to what could potentially happen to any social movement when everyone isn’t on the same page.

Shock to the System is a version of the game where the system fights back against the players’ movement even more than in the others, so the movement must come up with new methods of fighting back themselves!  The two decks in this expansion pack are: The System Shocks Back, where the system hits back harder against the movement’s growing power; and The New Resistance, where players have even more creative ways to take on the system.  (Personally, this expansion pack is my favourite.)

There aren’t many board games like Co-Opoly and Rise Up.  They inspire players about the actions they can take to further social change for a better world, and they teach tactical strategies for how to make it happen.

So who’s up for a game night?

See also – Book review: A is for Activist. and Counting on Community, two children books

Previous Post Rebecca Thomas: For all the women out there who were never believed