Blankets infected with smallpox were handed by early settlers to indigenous peoples as a biological weapon. That’s no joking matter, writes Jackie Davis.

KJIPUKTUK (Halifax) – It may not seem to be the first, or the most relevant place to face racist ideas, but at a Monday night Open Mic Comedy event in a local bar this week, a white comedian stood up and told ‘jokes’ relying on deeply layered histories of relations between indigenous peoples and settlers.

The histories and relationships, that is, were deeply layered- his jokes were anything but. 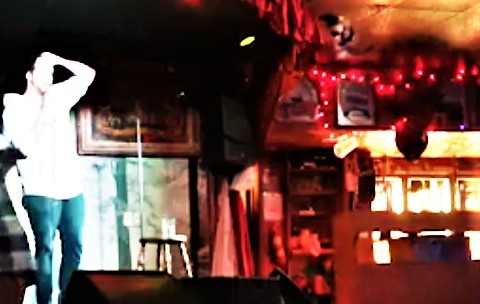 Ramping up from some other comments on being ‘homeless’, he commented on his living-situation:

“Took over a lease and the guy’s native American girlfriend of course came with the deal. She…slept on the floor and I didn’t want to offer her a blanket, you know?”

At an ‘amateur’ comedy night, you may expect rookie mistakes and possibly coarse-grained jokes or off-colour remarks. Comedy is a kind of performance that makes points by hitting hard against boundaries. In this case it merely showcased the ignorance and shallow attitude of one performer.

What should our reaction be? One audience member said “I felt like everyone in the room was similarly shocked by how disrespectful [it was]. That bomb pretty much ruined it for everybody. But no one stood up or called him out.” The audience gave as little reaction as possible as the amateur glided through to his next set-up to talk about ‘black balls’ and comparing Mormons to dogs.

If we talk about the purpose of comedy, the Oxford dictionary would say it is “…entertainment consisting of jokes and sketches, intended to make an audience laugh.”

The performance missed that mark; the audience gave no positive reinforcement.

Maybe his intent was to be closer to satire: “The use of humour, irony, exaggeration, or ridicule to expose and criticize people’s stupidity or vices, particularly in the context of contemporary politics and other topical issues.”

Well, he certainly exposed some stupidity and vice.

We could argue about the purpose of comedy here,  but in reality this performance depicts a deformed or—at the very least—singular perspective of reality that is hurtful to and misrepresents real people.

Was the comedian aware of current issues of indigenous struggle?  Didn’t the city of Halifax just last week remove a statue of  a colonial player from a prominent space, only to have racist talk perpetuated on a stage the following week?

Was he making any real comment, other than trying to get a laugh for his own success and pleasure?

No matter how many jokes about brown, white or black folks this comedian  may make in other performances, he should always keep in mind what is funny or critical, and what is perpetuating hateful, racist thoughts. A performer of any kind needs to be conscious of the society they’re speaking within.

Previous Post Letter to minister Lloyd Hines: Guysborough does not need a boom and bust economy

Next Post Selection of prison based on gender identity a victory, but alternatives to incarceration still needed, says advocate