KJIPUKTUK (Halifax) – First it was Gerald Stanley, a 56 year old white Saskatchewan farmer, who managed to beat the charge of murdering 22 year old unarmed Colten Boushie.  Boushie, an Indigenous man, drove onto Stanley’s farm.  Boushie was with four friends in a car with a flat tire.  In the farmyard, Stanley shot Boushie at point blank range in the back of his skull by Stanley. The jury of his ‘peers’ (meaning all-white) decided that Stanley was not guilty around 7 pm on Fri. 9 Feb.  The jury deliberated about 18 hours, and their not guilty verdict was delivered just in time for Happy Hour at the local bar.

Then it was Raymond Cormier’s turn.  On Thursday 22 Feb. Cormier, a white man, also age 56, was found not guilty by a Winnipeg jury of murdering 15-year-old Tina Fontaine.  There was plenty of time to get to Happy Hour in this case.  The jury had deliberated for only about 13 hours, and everyone was discharged before the weekend. 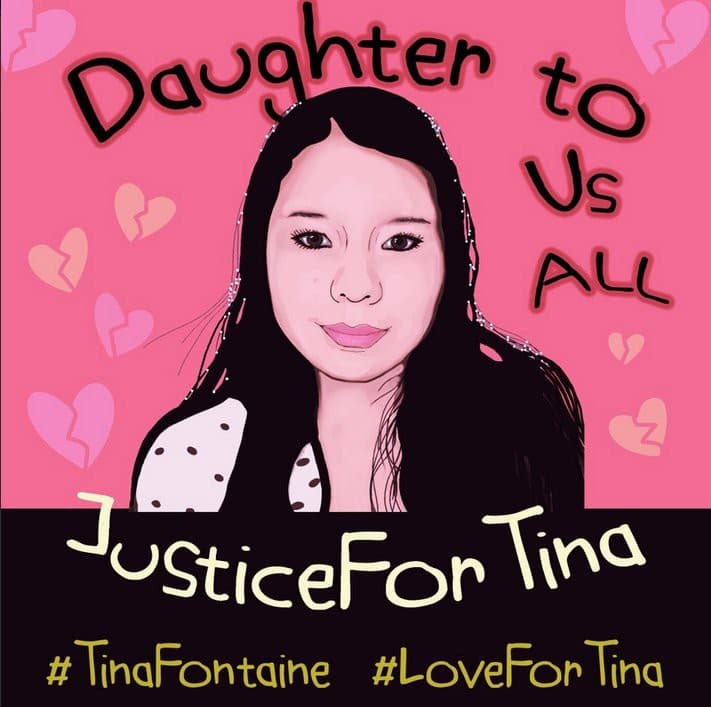 In terms of the prosecution, in both cases the crown seemed to be “phoning it in.”

Bill Burge was the crown in the Stanley case and presented what appeared to be a lackluster performance. “He should never have been appointed,” said Federation of Sovereign Indigenous Nations (FSIN) Chief Bobby Cameron.

Sheldon Wuttunee, a former Chief of the Red Pheasant First Nation where Boushie lived echoed Chief Cameron’s concerns.  “We had to encourage the crown prosecutor to prosecute and not help the defence,” he told reporters gathered in a tightly packed room. “It was very frustrating.”

Eleanor Sunchild a legal representative for the Boushie family claims the family was mistreated right from the start, as there was “little communication from the Crown to the family. There was no relationship there at all.”

In the Cormier case, the Crown and police had set up at least one “Mr Big” sting operation in an effort to entrap Cormier.  It did not work;  despite the police collecting hours of taped phone calls, Cormier never really confessed. The Crown also adduced no forensic evidence, and the Defence did not mount a case at all.  Yet Cormier and teenager Fontaine had been seen many times together before she was found dead in a Winnipeg river.  Her body was wrapped in a similar duvet to the one Cormier had and it was weighted down with stones.

There were many similarities in both cases but, oddly, the Crown prosecution services disagree.  In each case, a white middle-aged man thinks nothing of ‘getting rid’ of his “problem” by committing a crime.  Stanley didn’t want the Indigenous kids on his land.  Cormier didn’t want to be charged with having had sex with an under-age girl.  In the Stanley case, the white killer is 2-1/2 times the age of the victim.  In the Cormier case, Cormier was four times older than Tina Fontaine.  Both victims were poor and Indigenous, from First Nations’ reserves.  If an Indigenous person is murdered, it seems the benefit of the doubt goes to the white guy.

The problem with the criminal justice system is that it’s rigged. The justice system tends to look at each crime in isolation and individually. It rarely looks at crime in terms of systemic issues.  What happened in the Stanley case was that white jurors found it reasonable that when Stanley saw the Aboriginal kids drive onto his farm, he went to the shed to get a handgun and load it with two if not three rounds (bullets).  Cormier’s defence managed to show that there was no direct link between Cormier’s behaviour, his phone conversations taped by police, and the murder of Tina Fontaine.  Cormier’s defence argued the evidence was entirely circumstantial and no one should be convicted on the basis of circumstantial evidence.  What came out at both trials is the following:  no white person should be convicted of murdering an Indigenous person – even a child — based on circumstantial evidence.

Looking back thru criminal cases, I note the following famous murder convictions based on circumstantial evidence:

Peter Demeter was convicted of murdering his wife (1974);

Colin Thatcher was convicted of murdering his ex-wife (1984);

Thomas Sophonow was convicted of murdering Barbara Stoppel, a clerk in a donut shop (1981);

There are many cases of conviction based on circumstantial evidence—unless, apparently, the victim is Indigenous.

See also: Judy Haiven: The verdict in the Boushie murder case. Are we going backwards?

If you can, please support the Nova Scotia Advocate so that it can continue to cover issues such as poverty, racism, exclusion, workers’ rights and the environment in Nova Scotia. A paywall is not an option since it would exclude many readers who don’t have any disposable income at all. We rely entirely on one-time donations and a tiny but mighty group of kindhearted monthly sustainers.

Next Post Cindy Littlefair on the elimination of school boards: Finding our voice, time to show up