KJIPUKTUK (Halifax) – Unreliable drug and alcohol testing performed by an Ontario lab has caused the unwarranted break up of families, not only in Ontario, but very possibly in Nova Scotia as well.

Community Services used the Motherisk lab, an annex of the Toronto Hospital for Sick Children, for a hair strand test that has now been discredited in hundreds of cases.

After a review, Ontario revisited each and every case where Motherisk evidence was used.

Not here in Nova Scotia, though. 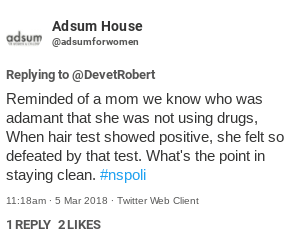 “I want to assure this honourable member that a lab test would only be one of many different standards that would be looked at when custody is being decided,” Regan told MLA Susan Leblanc during question period on March 8.

If any affected parent is concerned they should contact the Department, and we will look into it, Regan told the Legislature on the same occasion.

This response is wrong in several ways.

If the test result is one of the factors that causes Community Services to take custody of a child, than it stands to reason that in some cases it may have well been the deciding factor. In 2016 the Chronicle Herald reported on a case where a judge returned one child to her parents based on faulty drug test evidence, yet another child was removed, and has now been adopted.

And to expect affected parents to even be ware of the news reports on the Motherisk lab is completely unrealistic. How could parents (or children) possibly request a review if they don’t know about its existence? Even if they do suspect something is amiss, they will need legal support to present their case.

Clearly, the proper response, and the decent thing to do, is for the department to order an independent review of all relevant cases in a systematic and transparent fashion. As in Ontario, that process should include a framework for counselling and legal support.

The more so since decisions by Child Protection Services are already suspect given the a widely disproportionate number of children in care who are Black or of Mi’kmaq ancestry.

Even if no decision is ultimately changed, there is a moral obligation to ensure each family’s case gets a fair and speedy independent review. This is not a time to worry about money or efficiency. We’re talking about real people, real heartbreak, real lives, after all.