KJIPUKTUK (Halifax) – “Our bias is the market,” said Marco Navarro-Génie, president of the Atlantic Institute for Market Studies (AIMS) as he introduced education pundit Paul Bennett. Bennett was there to give a talk on governance in Nova Scotia’s education system at the Central Library on Spring Garden Road this morning.

It’s exactly that market bias that so worries teachers who attended the talk.

Bennett lauds the recent elimination of school boards and wants real power to reside at the individual school level, closely following an argument laid out in this recently published paper.

Such an approach will pave the way for an increased presence of corporate interests at the schools, the teachers fear.

“Having eliminated school boards and concentrating power at the school level, with that language and rhetoric, decisions can be made  that have no longer anything to do with a structure of a board above them,” says Dr. Pamela Rogers, a member of the group Educators for Social Justice. “That opens up a path to do things like fund raise for their own school, allowing people to choose what school a student goes to, opening the door to all kinds of private business interests, and creating inequalities as a consequence,” Rogers says.

Grant Frost, a teacher who writes on education and is active in the Nova Scotia Teachers Union, agrees.

“Wealthier communities do really well in that model. People who have access, who have the ability to drive to meetings, and who know the ins and outs of advocacy. To some extent that is the case even now. But with this new model Bennett pushes, it will be more pronounced,” says Frost.

What was presented as a round table, a way to exchange ideas, turned out to be nothing like it. Navarro-Génie, who moderated a relatively brief Q and A, seemed to prefer male AIMS supporters over female teachers by a large margin. Bennett, meanwhile, tended to interrupt questioners the moment they started asking their question. It all seemed a bit rude, really. 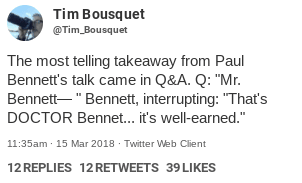 “What surprised me was the conversation in the beginning, from the AIMS president, saying that a lack of public dialogue is abhorrent, and then we saw people getting shut down at the end. They ended early, there were six women with hands in the air, and all the while Dr. Bennett so disruptive and condescending. A very interesting gendered dynamic,” said Rogers.

Paul Bennett and the Atlantic Institute for Market Studies (AIMS) have cooperated for a long time. Bennett holds forth about education, and AIMS gives him a forum. It’s not just what Bennett argues that concerns many teachers, but also the organization that supports him

Frost considers somebody like Bennett more dangerous because of his association with AIMS, an organization that wants government to get out of the way, and believes business is better than the public sector at pretty well anything.  AIMS wealthy backers include people like John F. Irving, Don Mills, Scott McCain and current director John Risley.

“Bennett’s association with AIMS raises questions around motivation,” say Frost, who warns that these seemingly theoretical and abstract discussions about governance can have huge consequences.

“The next two years are going to be very challenging for public education in this province. We have to take a stand now if we want education to remain public. This is a huge moment in our history.  We have to determine as a province how much we value public education. If we decide that we don’t, than we will see things getting privatized,” says Frost.