KJIPUKTUK (Halifax) – As police street checks continue unabated in Halifax and all of Nova Scotia, members of the African Nova Scotian communities and their allies are collecting signatures for a petition asking that the racist practice be banned province-wide. 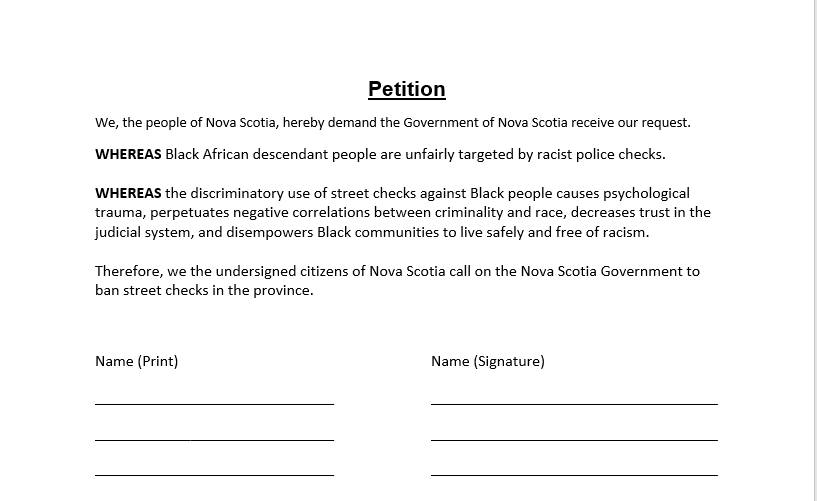 The group is also distributing a card to inform people how to file a complaint about a police officer, and how to behave when stopped.

“We don’t want to wait for the report by dr. Wortley and the Nova Scotia Human Rights Commission which will only be published in 2019. And even then it may not have the desired result,” says Tiffany Gordon, a graduate student at Dalhousie, and one of the organizers behind the initiative.

Members of the group include Working While Black, the Nova Scotia Public Interest Group (NSPIRG), Solidarity Halifax, and several individuals.

The authors of the letter that eventually triggered the NS Human Rights Commission’s ongoing investigation, also demanded a moratorium on the practice, but that request was ignored. In October the African Nova Scotian Decade for People of African Descent Coalition, a coalition of more than 25 African Nova Scotian organizations, also asked for an immediate moratorium, again to no avail.

The Nova Scotia Human Rights Commission has organized a series of community meetings in Halifax and rural HRM that merely confirm that racist practices by RCMP and Halifax Regional Police are indeed common. That information should by now no longer require further evidence that is often painful for people to divulge.

The Nova Scotia NDP has agreed to table the petition at the Legislature. The group is also asking the NDP to work on a bill to stop the practice of police street checks, or carding, says Gordon.

The cards that explain how to file a complaint about a police officer have been checked by lawyers. It should be helpful for anybody who was harassed by police. We also want people to know their rights generally, says Gordon. It also lists phone numbers for Legal Info Nova Scotia (902 455-3135 or 1-800 665-9779) and contact info for Nova Scotia Legal Aid.

If you would like copies of the petition to start collecting signatures, email stopstreetchecksns@gmail.com and organizers will get copies and further instructions to you.

See also: The white response to carding is a disgrace