KJIPUKTUK (Halifax) – A new report shows that residents of rural Nova Scotia are having a hard time finding a child care spot.

Research by the national office of the Canadian Centre for Policy Alternatives (CCPA) shows just how difficult it is. There is a report, and more importantly, there is an interactive map allowing you to explore child care coverage across Canada. You can zoom in, zoom out, or plug in your postal code. 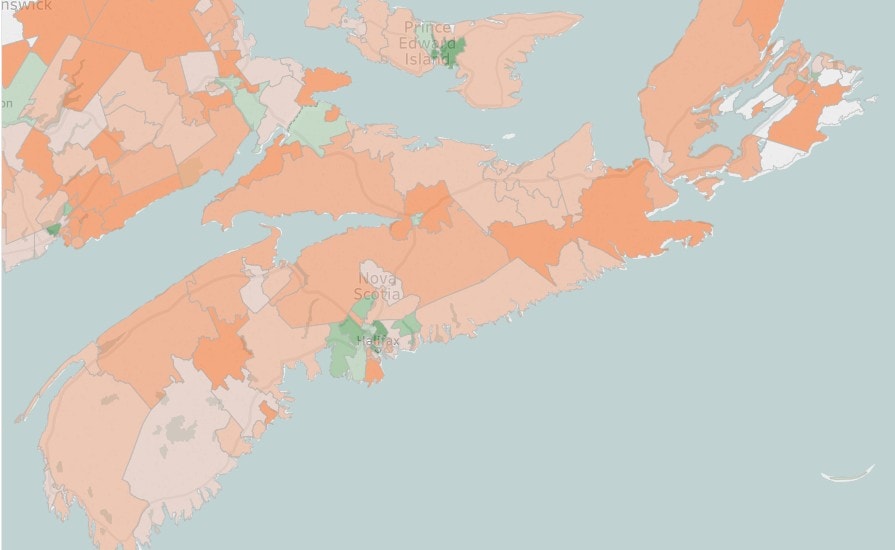 Provincially, 41% of our 42,000 non-school-aged children receive child care. In Halifax child care coverage is at 52%, but in rural Nova Scotia, where half of the province’s kids live, the coverage averages only 34%. These are avarages, some parts of rural Nova Scotia are much worse.

A CCPA report that looked at child care fees found that parents in Nova Scotia on average can expect to spend about $900 on child care per month, per child.

Contrast these fees with Quebec, where the government sets a flat fee, and parents are expected to pay only between $164 and $179 per month.

In September 2017 the province launched a pre-primary program for four-year olds. 2,300 kids are currently registered, and the government says that in two more years the program will be universally available across the province. That program, although positive, is no substitute for child care, as it only operates during school hours, and only targets one age group.

A wrap-around child care program for the pre-primaries is being looked at, but logistics around capacity and transportation, especially in rural Nova Scotia where the need is highest, suggest this is not likely to happen while this austerity government remains in power.

The Nova Scotia office of the CCPA, in its 2018 Alternative Budget calls universal public child care an issue of women’s equality, both in terms of low wages paid to the mostly female staff of child care centres and the many working mothers affected by the lack of capacity.

“Building a system, driven by quality and safety, requires a plan developed in collaboration with local communities, with funding tied to realizing that vision. It will take time to scale up to a system, to build new spaces, to train and recruit educators, but it could be done within five to seven years,” the CCPA document suggests.

Many public child care proponents have long argued that investing in affordable and public not-for-profit child care is actually a good business decision, as the economy stands to benefit from an increase in labour force participation, incomes and employment.

Previous Post Not by fists alone: Fighting against the far–right and winning in Nova Scotia

Next Post The best path out of poverty is a job, Community Services deputy minister tells social assistance recipients, but that’s easier said than done