than a big feed of clams n mussels.
I don’t differ—’d rather clams than lobster
any day of the week. Was just up the Dairy Treat,
laid into a fine mess all fried up with French fries.

Tasted the finest kind, if bites were a tad rubbery.
Looked out cross the lot, saw a feathered ruckus
floatin on the garbage barrel’s overflow
—stupid gull, plastic fork stuck bent in its beak,

an onion ring ringin its neck.
I would’ve pulled that fork outta there
so ol greedy-guts crazy-head could enjoy its fried treat
but you think that damned bird would sit still?

chunks of Sty-ro-foam, Zip-loc bags, what we call penny whistles.
Birthday balloons lookin like run-over jellyfish. In all colours!
Bait bags, shell casings, their rubber gloves. All colours!
When I was fishin Millie always made me my mitts.

Weren’t nothin syn-theticful—nothin but sheep’s wool.
They’d tighten from dunkin em in the salt ocean each trip.
Waterproofin. Some warm. With the finger in em for firin
the .22 on board in case we run up on any seals.

You ever seen that bit on the television? They’re out in the boat
and the young fella’s wonderin what to do with his chip bag
or gum wrapper or somethin or other, and the old fella,
he says to just toss er overboard. But where does it go, Dad?

Away, son; away. Well, well now. Where the heck’s away to?
Some hazy Atlantic nowhere? That fog’s comin in fast though.
Feel it in my lungs, layin down another oil-based coat.
Sure as I’m breathin tumbled round, broke-down poly-sty-rene:

water molly-cules and an-ti-thetic syn-thetics fillin my cavities.
Nothin much you buy lasts anymore, credibly quick to break.
Then it’s broke it lasts and lasts and lasts and won’t ever rot!
Oh, you know people—don’t they love that ol beach glass.

Started makin necklaces outta the stuff, like it’s pearls!
That busted glass is a bunch of trash—way I see it, the start
of a terrible habit. Pieces can be pretty, sure—so! No need.
Pretty as a Coke can. Go get yourself wed with a lobster band.

Har-huh-hargh! They tell me it’s all the tobacco I used to smoke,
but I know damn well it’s this fake plastic fog the ocean’s pushin.
Dig my lungs up 50 years from next winter, you’ll find a pair
of bags fit for carryin your poisoned groceries home in. 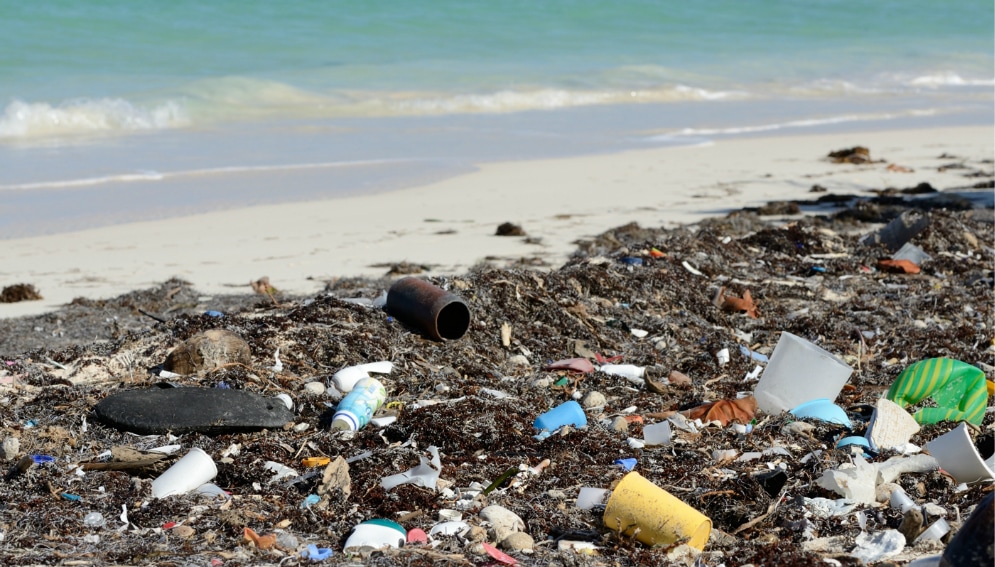 Lawson Roy’s Pinion on Syn-thetic Polymers, a new poem by Nova Scotia poet Cory Lavender, is the third of eight poems we will publish during the remainder of the year, selected as a result of the call for poems we issued in May. The poem is in the voice of Cory’s lobster-fishing grandfather, Lawson Roy, from Port Mouton.

His most recent poetry collection is Lawson Roy’s Revelation,  a chapbook published by Gasperau Press.

Cory Lavender’s poetry and essays have been featured in various literary journals, such as Riddle Fence, The Antigonish Review, and on-line at The Island Review.

Cory also works as a freelance copyeditor and ghostwriter, and is always looking for new and interesting projects to work on. He can be contacted at corylavender@gmail.com. He lives on Nova Scotia’s South Shore.

Previous Post Rana Zaman: Blame the predators and their enablers, not the religion

Next Post Peaceful protest at Burnside jail: Conditions must change!