Wela’lioq. Thank you to the Mi’kmaw people and to their ancestors.

Thank you for being at our side at the darkest hour of my people, the Grand Dérangement (Great Upheaval), also known as the Acadian Deportation.

I am alive today because of the Mi’kmaq. I want to thank them. I owe them my life and that is a debt I cannot possibly repay. 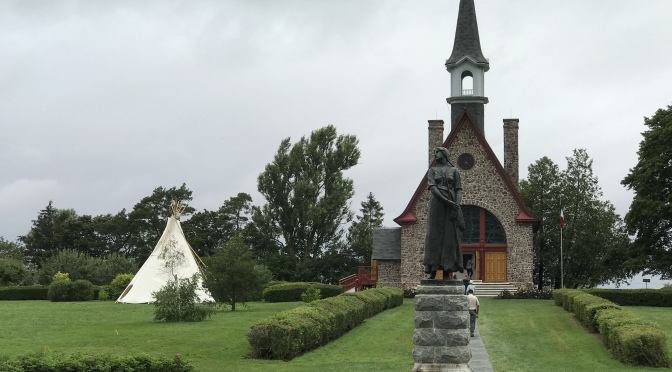 I was not there in September 1755 in Grand-Pré. I can only imagine the horror of families, husbands and wives, and their children torn asunder. Men, embarked on vessels mandated by the British Crown, must say good bye to their beloved Acadie. Did they know then that they would never be able to return to the land that their ancestors had harvested for more than a century?

My Acadian ancestors had decided, still reeling from the Utrecht Treaty of 1713, that they would accept British rule and become citizens of the Crown. They would not, however, pledge allegiance nor take up arms either for the Crown or against their enemies. They would not fight against their brothers and sisters of New France nor their indigenous friends who had welcomed them on their land. These brave Acadians were derided as French Neutrals.

I would like to think that my ancestors were among the first European pacifists in North America. What we do know, from historical record, is that too many Acadians paid for this bravery with their lives. They were dispossessed and deported, long before the mass exoduses or brutal European wars that would scar the 20th century.

Acadians are a remarkable but oft-forgotten people, a footnote in the history books. They are also ignored by too many who do not know the depth of despair that marred my people for centuries. If you see a proud Acadian woman or man today, remember that their ancestors were but a shell of themselves in the years leading up to and soon after the Conquête of 1759.

And why are there Acadians today in Atlantic Canada and beyond? It is because of the Mi’kmaq who took us in while the British chased after us, seeking to deport as many Acadians as they could. There were skirmishes and the Acadians and Mi’kmaq fought back. The Abenaki and probably others like the Maliseet, or as they refer to themselves Wolastoqiyik, were also involved, but with little result.

History was not on our side, and the only thing to do was to retreat. Children, women and men turned back into the waiting arms of the Mi’kmaq. Brave Indigenous men and women protected these displaced Acadians. They managed to welcome many of those who fled, who were unwittingly a part of this mass exodus. All of Acadie was affected. A whole nation was ripped from a land they had come to love and cherish.

I do not resent the British nor their descendants who have become my fellow citizens. Acknowledging the past, does not mean that we must let horrific acts become a part of who we are today. We remember, we honour, we forgive, if we can. We accept and move forward, together.

But the sad history of my people pales in comparison with the longstanding suffering that the Indigenous peoples in Canada have endured since and live through even today.

This land was not ours. It was Mi’kmaw land; it still is. They had lived here many thousands of years before Champlain ever imagined crossing a vast Atlantic Ocean in search of new land and the fur trade. But, true to themselves and their ways, the Mi’kmaq and other Indigenous peoples welcomed Champlain in 1604 as well as the Acadians who came in increasing numbers after 1630.

Debt of a lifetime

I can only speculate as to how it really happened. How did Acadians managed to escape their shackles? How long did the Mi’kmaq provide safe haven for so many of them? Who was it that prevented me from becoming a Cajun? Who saved the lives of my ancestors? I will never know, but chances are that their descendants have been living beside me all along.

I have never had the courage or the mental fortitude to thank the Mi’kmaw people at large, much less converse with a real person. With whom do I speak to? Who would even listen? If I cannot even say it to one person, how do I thank an entire people?

The Mi’kmaq form a proud nation. Much like mine, theirs has been built through the hard work and determination of women and men who stuck together, who forged ahead despite impossible odds. We are the sum of our life experiences but also of events that are beyond our control.

My life is theirs, but I am ashamed of the way we have treated the Mi’kmaq. We have dispossessed them of their land, their livelihood, their ways, their dignity. History teaches us that too many injustices have been brought to bear on such a generous and welcoming people.

This parcel of land on Mother Earth that they chose to inhabit is majestic. From Cape Breton Island (Unama’ki), along the Nova Scotia Coastline to the Annapolis Valley (the hub of Acadian life in the early 18th century); from the Saint John (Wolostok) River watershed of the Maliseet to that of the Aboujagane River, from the now Acadian Peninsula to the shores of Gaspesia. We should, to honour their language, say Gespe’g. This word is derived from gespaqami’g, which means « where the world ends ». 1This vast territory and the waters surrounding this land was and is their home. We should all learn to say it with respect and deference: Mi’kmaq, the people; Mi’kma’ki, the land; Mi’kmewei, pertaining to or belonging to the Mi’kmaq.

They had welcomed Acadians on their land four centuries ago. They had provided us with shelter, food, and many survival techniques that had been handed down to them for countless generations. They still had a place for us alongside them when, decades after the Grand Dérangement, Acadians returned home to settle anew. Again, the Mi’kmaq shared their land and their ways with us.

In this unforgiving land that was to become Canada, Indigenous peoples taught us to survive and to live off of the land. They had given us back our humanity at a time when being alone with nature could become a death sentence. They shared traditional medicines, and became our friends.

But time has brought us further and further apart when we should have stuck together all along. A small gap seems to have grown into a great divide, pulling us further apart. It is tragic that the Mi’kmaq and Acadians have forgotten the strength of the friendship that had been forged between them in the past. Our shared history is seldom spoken of in public, much less understood by our contemporaries.

How have we, as Canadians, repaid them? We insult their intelligence. We have robbed them of almost all that they have. We have cornered them into small swatches of land that cannot compare to the vast riches of the land, and water, and nature that they lived with in harmony and breathed in for millennia, well before European settlements.

And now, my Acadian compatriots vastly outnumber the Mi’kmaq but do not always come to their aid. Some do, with dedication and vigour, but the task at hand is overwhelming.

Our longstanding friendship with the Mi’kmaq should be a living testament today. Acadians should stand with them. Their struggles are also ours. Their plight is as important as ours was in 1755. We should all stand tall, together.

So thank you to the Mi’kmaq, to each and every one of you: Wela’lioq. May this blessed Mi’kma’ki you have shared with me and my ancestors be truly yours again one day.

I would hope that you, in your welcoming nature, would continue to accept that your Acadians friends live beside you, stand with you, and share in your wisdom, much as your ancestors have done with mine in the past.

Originally published on Ricky G. Richard’s blog D’Acadie at d’ailleurs, republished on the NS Advocate site with his kind permission.

You may consult the following online Mi’kmaq dictionary : mikmaqonline.org. An earlier version of Wela’lioq: Acadian letter to the Mi’kmaq was published in the Mi’kmaq Maliseet Nations News, October 2018, pages 21-22.

If you can, please support the Nova Scotia Advocate so that we can continue to cover issues such as poverty, racism, exclusion, workers’ rights and the environment in Nova Scotia. A pay wall is not an option, since it would exclude many readers who don’t have any disposable income at all. We rely entirely on one-time donations and a small group of super nice monthly sustainers.