KJIPUKTUK (Halifax) – Good evening everyone. Thank you for joining us tonight for this screening of “My Week on Welfare”. My name is Tim Blades. I am a 40 year old income assistance recipient, a member of BRAG (The Benefits Reform Action Group) and also a member of CASAR (The Community Agenda for Social Assistance Adequacy and Reform).

I am going to speak tonight about the stigma that myself and others on Income Assistance face. I am going to provide some commentary on the on-going ESIA transformation and the consultation that the Department of Community Services (or DCS) has engaged in. I will also illustrate why someone like me, with my knowledge and lived experience, should’ve been involved in a truly meaningful consultation with those who have the power to change things.

To live in poverty is to live a life where your health and safety are compromised.

As we saw with Robin’s story, those who are on ESIA (Employment Support and Income Assistance, or “welfare”) often live in substandard housing. The current shelter allowances for those on welfare are $535 for a single person, $570 for two people, and $620 for 3 or more people. These rates are supposed to include power and heat/HW. Sometimes a person is allotted just $300 for shelter. I, as a boarder, receive $223 a month for shelter. The current shelter allowances are based on 1995 rates.

With the upcoming welfare reform, clients who fall under Regulation 45 (those who are permanently disabled and unable to work), will receive the standard $535 as part of the new Standard Household Rate. Currently, those who are under Regulation 45 receive less than $535 if their rent is lower than $535. There are no other changes to the shelter allowances coming with this ESIA reform.

On July 19th, I was interviewed for an article in the Star Metro regarding some announced changes to Nova Scotia’s ESIA program. In that article, I said “It’s not enough. It’s not even close to enough,” I shared the article to my Facebook timeline. In response, someone shared a picture of Redd Foxx that said “The best way to get on your feet is to get off your ass”. To be clear, I am grateful for the changes that have been implemented; However, I do stand by my statement. These changes are not enough.

The consultation that has taken place is not enough. When groups such as CASAR request to have time with the premier or the Department of Community Services Minister, we are forwarded to the Executive Director of the ESIA program Brandon Grant.

Mr. Grant, by his own admission, doesn’t have the power to make changes. We are thankful for his time, but he is not the person we need to meet with.

Not only are these consultations not enough, I challenge that the examples presented to recipients and advocates at various DCS consultation sessions are not grounded in reality. 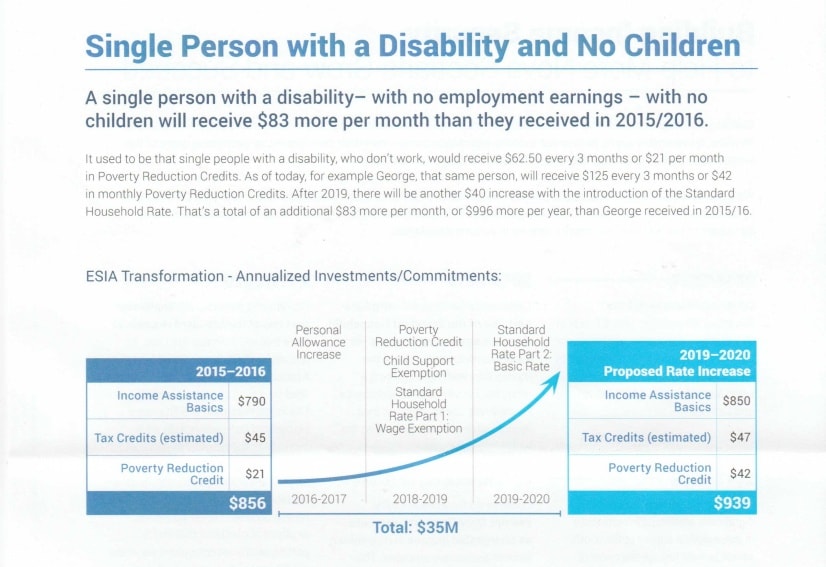 An example of this is DCS recent claim that beginning in 2019 clients, who are single, disabled and have no children will receive $83 more per month than they did in 2015/2016. This $83 includes the historic $20 personal allowance increase that was implemented in 2016, the $40 increase that is coming to some Income Assistance recipients next year, plus tax credits and the recent increases to the quarterly Poverty Reduction credit. This also doesn’t factor in the loss of the travel expense, which could be as much as $78, which as I’ve said many clients were spending on food or bills. As Aron has said, he has $50 left after paying bills.

What I would like is for someone to sit down with Aron and myself, and explain how he is supposed to ration his Poverty Reduction Credit over three months, as this example suggests. This example is one of those things that makes sense on paper, but loses all value when applied to real life.

According to Vince Calderhead at Pink Larkin, when you factor in the cost of living, welfare rates in Nova Scotia have decreased by 50% since 1990. Currently, ESIA recipients live 30-60% or more below the poverty line.

Now a little about me. I was raised by a single mother. My mother raised me and my brother while on welfare. There were times where we had very little to eat. When I was old enough, I worked for a few hours a week at the school library, and I went to the food bank, but even with that, ends would never meet. Life is very stressful when you don’t know how you will eat in a day or two, when you can’t go on the class field trip, or you can’t play basketball because you don’t have a bagged lunch. That was life. 50% of Feed Nova Scotia clients are ESIA recipients. 17% are the working poor.

“Why bother living when you can’t even afford to live?” is an alarming statement. It’s even more alarming when it comes from a loved one who has a history of mental health issues. If you have any knowledge of the ESIA program, you know it is unfortunately common for paperwork to mysteriously vanish. Now put yourself in the shoes of someone with mental and physical health issues, and you pass in whatever paperwork your caseworker asks for…and it vanishes. And then you lose your special diet or phone expense because someone at DCS says you didn’t get the paperwork done.

Then imagine that you have no one to advocate for you. You don’t know what agency to turn to because the illness you have causes you to socially isolate. This happens. With the welfare reform, a telephone will still be classified as a special need.

As I’ve said, I was a child on the system. Dealing with my home life, which was complicated by poverty, caused me to contemplate suicide as a child. I had ulcers due to stress. I grew up in the 80’s and 90’s. According to a recent Chronicle Herald article, 806 Nova Scotian children were hospitalized in 2016 due to mental health concerns.

About two years ago, I learned about the 100% Child Support Clawback for ESIA recipients. Until recently, if you are on ESIA and you were supposed to receive child support, you didn’t get a dime of it. 100% went to the Department of Community Services.

Like most people, I was outraged to find out about this. I wrote an article for the Nova Scotia Advocate, that includes excerpts from Jackie Torrens.

I am particularly proud of this article, because I feel it helped start a movement. It wasn’t until sometime after my child support article that I realized that the Child Support Clawback existed when I was a child. With everything I went through in my childhood, even if my father were around and wanted to help financially, he couldn’t. It would’ve been taken away. Having my father in my life would’ve made no difference at all in my battles with poverty. This revelation was reflected in a speech that I gave on Oct 4th, 2017 at a My Week on Welfare screening.

After that, some fellow advocates joined with me, including the Dartmouth North MLA. We went door to door with a petition, and heard other people’s stories about the clawback and ESIA in general. When the premier became aware of the clawback, he called the practice “unfair”. The child support clawback ended in Aug 2018.

Thanks again for coming out tonight. This is our 7th screening of My Week on Welfare. Our very first was June 1st 2017. These nights came about because I had an idea, and two other colleagues had an idea. We put those three ideas together, and these My Week on Welfare screenings are what we came up with. Through these nights, members of the audience speak up and share their stories, they ask questions, and in some cases they are able to get help with a struggle they are having.

I am not rare. Like many others, I find myself in a combination of circumstances. I am a caregiver. I live with mental illness. I also have a rarely diagnosed genetic condition, coupled with rare symptoms, called Alpha 1 Antitrypsin deficiency. I was diagnosed with Alpha 1 ten years ago, have been sick with it for about 13 years, and I have been fighting for treatment since day one. This is in addition to having had near deadly diabetes and dealing with non-epileptic events.

Like many others, my knowledge of poverty is a combination of lived experience, observing and listening to others, and research. Like many others, I know what some of the problems are, and I want to be part of a solution. According the Canadian Centre for Policy Alternative, between the legal system, the health care system, and lost productivity, poverty costs Nova Scotians between 1.5 and 2.2 billion dollars annually.

See also: There but for the grace of God. Aron Spidle tells Nova Scotia MLAs about a broken social assistance system