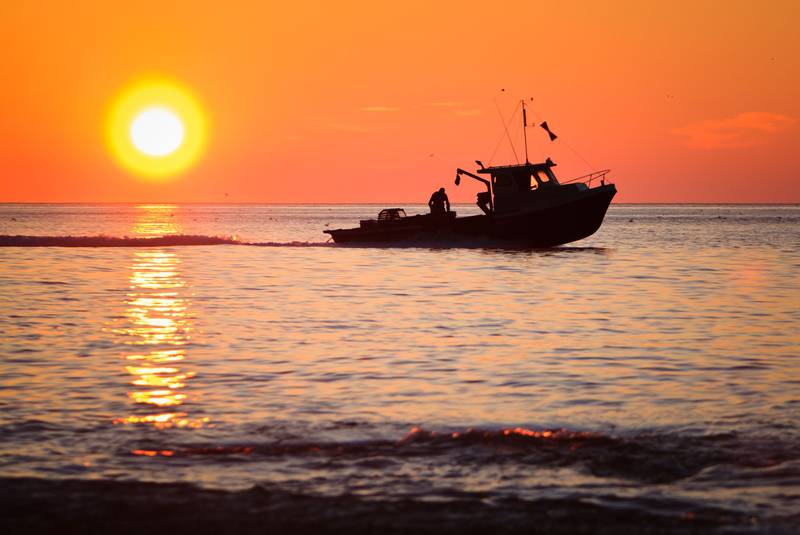 Many fishermen I know, in addition to being fishermen are educated professionals, ranging from various engineers to geologists; recently I’ve heard our objection for the proposed pipeline by Northern Pulp to carry a minimum ‘average’ of 62 million liters of treated effluent to the Northumberland Strait described as: ‘the fishermen’s objections are based on emotion, not science’.  I take offence to that and actually, my objections are based on science specifically. Consider this, pulp mills in this country have only been regulated for their discharges since 1996; in reality we are simply in the infant stages of regulation or we wouldn’t be living with situations like Boat Harbour.

I’ve written before, technically, the one ton of solids that will discharge daily with the millions of liters of effluent from Northern Pulp, are still scientifically considered toxic waste. One of the reasons Kraft bleaching pulp mills, like Northern Pulp, emit such enormous amounts of water is to dilute the effluent to the point it achieves the permissible concentrations allowable in the receiving waters. Yet the solids are not my major concern. The major concern is the temperature of this effluent, according to the mills reported estimate, the average effluent temperature released in the summer will be 37 degrees C, after passing the mills cooling towers, when the Straits ambient temperatures are already nearing 20 C and the lobster larvae are present.

In a recent study on lobster larvae performed in the Northumberland Strait, which is generally considered to flow from west to east, the larvae, (which float on the surface for 3 to 12 weeks), to the scientists surprise, some of the larvae were actually west when collected weeks later. This would suggest the flow modeling of the Strait has obviously been affected by other major factors such as global warming, changes in run-off due to industrial development up river in the St. Lawrence, etc. This fact in itself suggest that the modeling of the Northumberland Strait needs updating for the Mill’s receiving water study to have any prospect at accuracy and another reason for a Federal Environmental Assessment. Lobster larvae survival is diminished rapidly when the water temperature surpasses 20º C and is already a major concern without the addition of the millions of liters of hot effluent.

The technical advisers from the mill have stated publicly, the mill’s effluent with regards to temperature and salinity will meet the ambient surrounding water within 100 meters of the discharge point – the required, federal standard. This is something that is questionable when there is continuous massive discharge of effluent. Consider first the area the reported diffuser at the discharge point of the pipeline. The mill suggests, assisting in dilution, the pipe will have 6 diffusers, 25 meters apart. Simple math: 125 meters in length. So add 100 meters either end equals 325 meters to meet regulations. Then add the 100 meters each side, perpendicular to the line of diffusers equals 200 meters; again simply math to get the area, that’s 325 meters times 200 meters and you get 65,000 square meters of area in the entire water column, to meet the federal regulations for the temperature and salinity to meet the guidelines. A massive amount of ‘receiving water. That’s a bit of a problem for the floating lobster larvae in that area and as I’ve written previously, that’s against section 35(1) of the Fisheries Act as it will kill the lobster larvae. To be noted, why has the Federal Fisheries Minister’s failed to enact section 35 previously with respect to Boat Harbour? There is, are and have been documented fish kills, with regards to the Mills effluent at Boat Harbour and it’s release point to the Northumberland Strait.

Then take into consideration residence time for water in the Northumberland Strait is approximately one year. Make no mistake, this is not the ocean, the ocean is about 200 kilometers away. The actual proposed discharge location is a narrow channel, just outside the narrow mouth of Caribou Harbour, approximately 200 meters wide, just outside the ferry channel. Caribou Harbour itself is a small, shallow harbour that averages 5 to 10 feet in depth; rich with fish of all sorts, including lobster, crab, mussels, clams, mackerel, etc.  The actual narrow, marked channel the Prince Edward Island and Northumberland Ferry navigates to exit Caribou Harbour averages a depth of 25 feet and this channel needs to dredged every so often to maintain a safe depth for the ferry to travel in and out of the harbour. There’s actually a sand bar just outside the channel, towards the mouth of the harbour, which is too shallow for fishing boats, except at high tide; this sandbar covers a broad area from the channel to Caribou Island. It is shallow water. The tide obviously brings water from just outside the mouth of the harbour, the proposed new discharge location, in when rising. Onshore winds sometimes can hold it in; when the weather reports states surge tides, etc. it’s a factor the wind has on the tide. The tide cycle is approximately 25 hours, rising a little over 6 hours and falling approximately the same, depending on the phase of the moon, prevailing winds, etc. As mentioned, it takes roughly a year for the Strait to empty.  The tides of the Strait vary dramatically from one location to another. The area southeast of Pictou Island, based on dated modeling, is considered ‘low flow’; this is easterly of the suggested discharge location and the hopeful direction the effluent will take, towards deeper water and the very distant ocean.

There will be residual effluent that will accumulate, that will gradually worsen over time as the continued release of millions of liters of ‘treated’ effluent persists daily.  Then you have to consider another major component of pulp and paper waste, biochemical oxygen demand. This refers to the amount of dissolved oxygen needed to break down organic material in water. As levels of biochemical oxygen demand and total suspended solids rise, a water body begins to lose its ability to support aquatic animals. The water becomes anoxic, then hypoxic, (without oxygen) creating a dead zone. This is not uncommon and there are 400 ‘dead zones’ worldwide. One of them is in the Gulf of St. Lawrence near the mouth of the river and Anticosti Island, so not far away.

The Mill’s effluent experts are trying to suggest the new system will be better than the existing one at Boat Harbour, but it will not be simply because Boat Harbour allows all the toxic solids to settle out and the water to cool as it would be there for approximately one month, prior to its release to the Northumberland Strait.  This is not to suggest that should not be closed as per the Boat Harbour Act in January 2020, just the opposite. Boat Harbour is void of life and a complete shame. The latest estimate the public purse will have to pay to remediate this site is over $200 million and undoubtedly will end up costing similar to the remediation of the Sydney Tar Ponds; the sooner this starts the better.  Read the book ‘The Mill’ by Joan Baxter and you’ll better understand. I regret to say I received this book a year ago and only just recently read it. With approximately 65 pages of reference in the end notes, it is thoroughly researched and a must read.

Our government is collectively responsible for policy, policy change, etc. Within our government, the enshrined secrecy regarding information with respect to transparency between government and industry in this province needs to change. The fact that the Mill has managed to obscure what should be public information, under the ‘veil’ of competitiveness and trade secrets, etc., with regards to government official’s ability to act on the public’s account, is anything but transparent. Consider recently the Premiers response to the Supreme Courts decision when Justice Timothy Gabriel ruled that ‘if the province becomes a financial backer of Northern Pulp‘s effluent treatment plant, that raises questions on whether the level of funding will mean “upgraded safeguards” in light of the what the people of Pictou Landing First Nation have endured;’ Premier MacNeil was quoted saying he may have more to say on the matter.  This actually is a great example how transparency has eroded. That’s a broad topic and I’m attempting to keep this brief.

The Mill recently was successful in obtaining a court injunction against a few named fishermen, including unnamed ‘John and Jane Doe’ fishermen.  This action also includes a lawsuit from Northern Pulp against the same. Allan MacCarthy is one of the name fishermen. We asked Allan to represent us, as he is an intelligent, level-headed gentleman. He has only peacefully protested and never actually blocked the survey boat. In the last letter I wrote, I pleaded with the ministers to step in and ‘stop this madness’ before it escalates.

What the media has missed and is painfully obvious is that some of the unnamed fishermen are First Nations persons; I wouldn’t write this, but it’s no secret. Imagine the headlines, I suspect that would make international news, ‘Mill involved in Environmental Racism at Boat Harbour, sues First Nations for protesting new discharge location’! No doubt the lawyers for the mill did some research, prior to choosing the protesters to be named; yet they have named them under John and Jane Doe….. a corporate bully if there ever was one!  It should be noted that as of today, at least five out of the last ten days since the court injunction were suitable for surveying, yet the Mill has not attempted to do so and the proposed pipeline route is still ice-free.

I can’t help but wonder if in fact the Mill is actually attempting to meet the January, 2020 deadline.  The Boat Harbour Act, Bill 89, section 4 (1) states, ‘No action lies against Her Majesty in right of the Province or a member of the Executive Council in respect of the cessation of the use of the Facility for the reception and treatment of effluent from the Mill as a result of this Act.’ I would take that as serious.  They don’t appear to be. The estimated 70 million dollar sludge treatment facility, which undoubtedly would require a lengthy construction phase, needs to be in place by the end of July, 2019, 6 months in advance of the closure, yet the environmental assessment has to take place and approved prior to commencing construction; the Mill’s technical staff and executives are either ‘feigning’ an attempt at meeting the deadline, or are incompetent.  My opinion. Surely they would have prepared for a Federal Environmental Assessment, if they were seriously trying to meet the deadline? Considering it has been close to four years since enacting the Act, seems logical that they would have begun preparing four years ago?

Or maybe I’m just being ‘emotional’!

Previous Post Letter: You can’t take the milk out of the tea – Northern Pulp’s proposal to dump treated waste into the Northumberland Strait

Next Post Paul Vienneau: Why we have to fight our own battles