Devoted Herald readers, as well as provincial labour leaders and many union activists joined the rally in Halifax.  Cars driving by during the morning commute often honked in support. 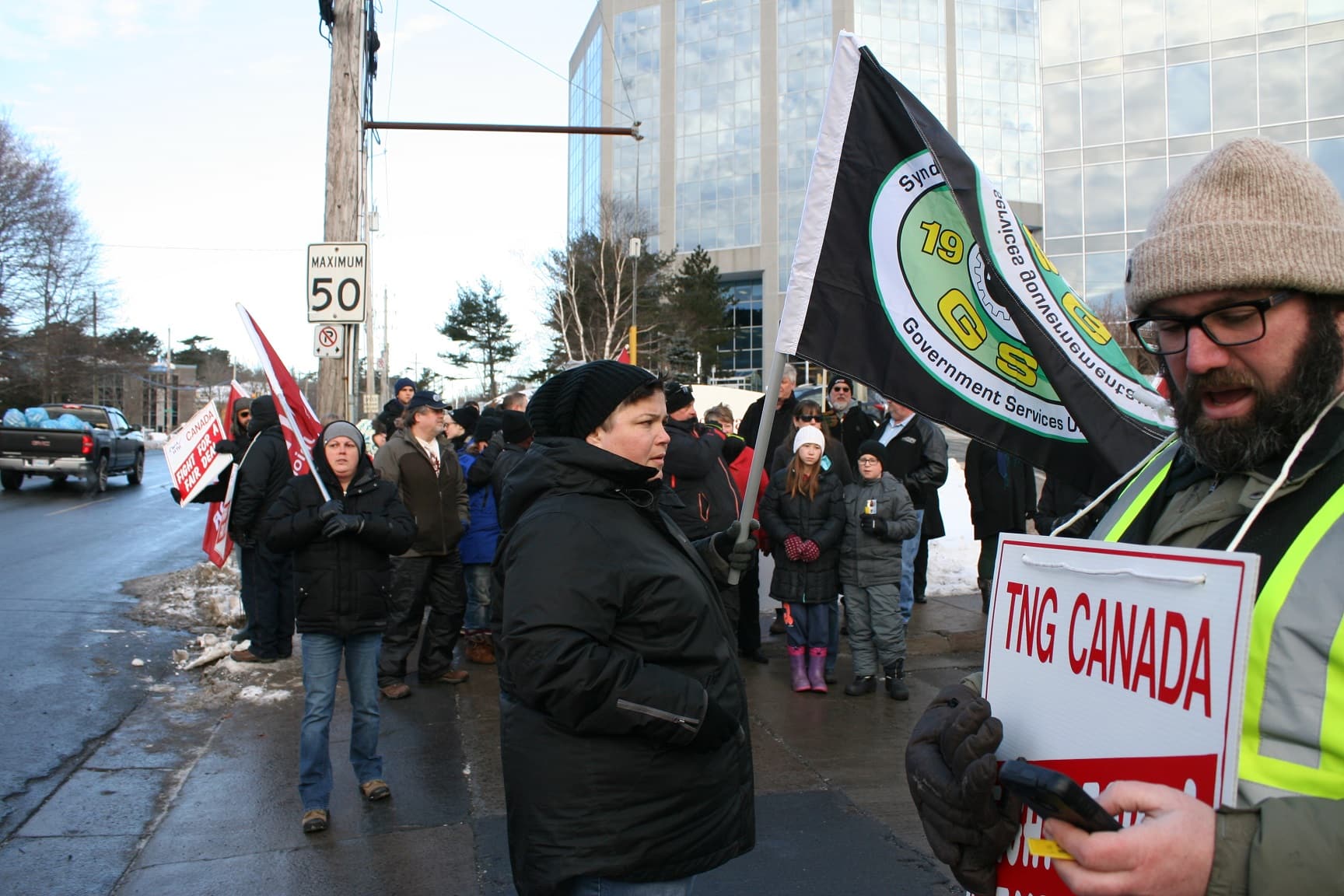 “I talk to a lot of people. They get it, and they stand with you,” Maureen MacDonald, interim leader of the Nova Scotia NDP told the crowd.

“They think it is disgraceful that the paper of record in this province treats its professional staff in this manner. People have  a great deal of respect for the work you do, and we will not allow this to go on,” MacDonald said. “This is a classic attempt to break your union and people not allow that to happen.”

61 journalists, editors, designers, and photographers, members of the Halifax Typographical Union (HTU), have been on strike for three days now, while the paper is being produced by local scabs and companies in New Brunswick and Ontario.

This Saturday the company couriered layoff notices to 18 newsroom staff, targeting editing staff, web editors, and photographers, only to suspend the layoffs when it recognized the legal ramifications of terminating workers wile they are on strike.

Not much real bargaining occurred during the lead-up to the work stoppage, the union says. Management abruptly walked out of conciliation talks in December, HTU vice president Frank Campbell told us at the time.

A last ditch offer of major concessions by the union to stave off a strike was shrugged off by the owner.

The layoffs are part of an ongoing trend.

The staff reductions are necessary to deal with shrinking readership and competition from digital news providers, the Herald owners argue.

This strategy is dangerous, says Tom McCoag, a 33-year veteran Herald reporter who as a result of earlier staff reductions now works as a page editor for the company.  McCoag was walking the picket line on Sunday.

No matter where new technologies will lead us, there will continue to be a need for journalists, McCoag believes.

“We are battling to save the future of  journalism in Nova Scotia,” McCoag says. “No matter the format, we will always need the storytellers, and we will need the editors, and designers to give stories the proper appeal so that people will read them.”

“I have watched the Herald decline over the years. When I joined there were bureaus in Amherst, Yarmouth, Bridgewater, and New Glasgow. None of these exist today.”

“How can we expect readers to continue to buy the product when there aren’t enough reporters to tell the story now?  We are missing stories because we don’t have the bodies,” McCoag says.

“Yet the newsroom is the one area that the Herald wants to diminish. It invests in every other department except the newsroom. Do they want to produce a flyer with ads, and fill the empty spaces with whatever?”