KJIPUKTUK (Halifax) – On March 28th about 160 protesters rallied at the Sobeys store in Tantallon to protest its appeal of a Nova Scotia Human Rights Commission (NSHRC) finding that the store engaged in racial profiling . 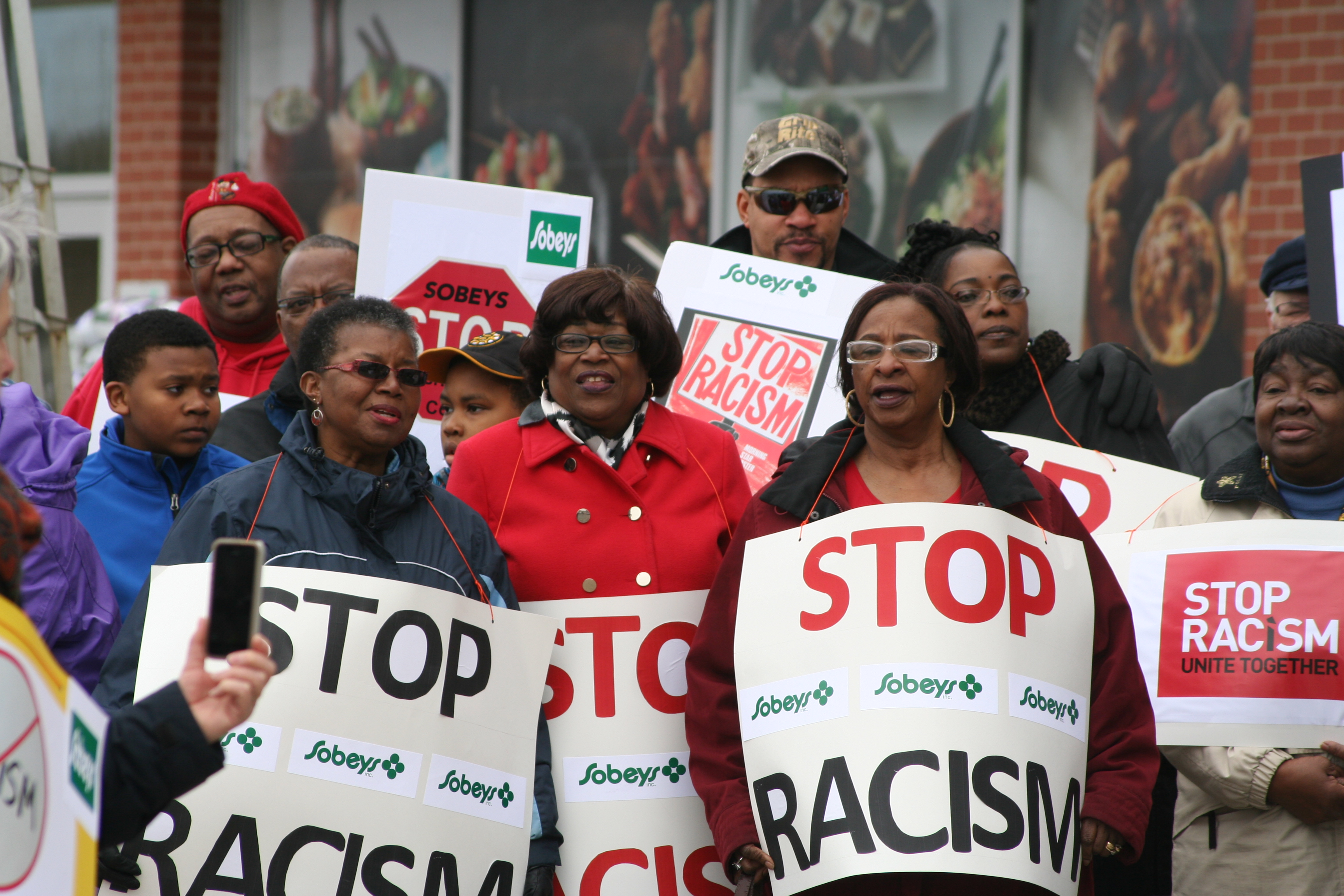 The deeply hurtful incident occurred in 2009, when in front of other customers a Sobeys’ employee rudely accused Andrella David, who is African Nova Scotian, of being a known shoplifter, and also of robbing a nearby liquor store.

David took the groundless accusation to the NSHRC. In September of 2015 a NSHRC board of inquiry ruled in favour of Ms. David, and concluded that racial profiling was a major factor in the case.

Think of all the complex legal jargon that was circling her as she was sitting there, while all she was saying was ‘I just want to tell my story,’  the simplicity of that message…

Sobeys is appealing on legal grounds, not because it disputes the facts of the case.

This means that seven years later a vindicated Andrella David is being revictimized by legal proceedings that seemingly will never end, say her supporters.

Even an apology to Ms. David by Sobeys is apparently too much to ask for.

The congregation of the thriving Emmanuel Baptist Church in nearby Upper Hammonds Plains, a historic Black community was the driving force behind the rally.  Ms. David is a member of that church.

Last week the Nova Scotia Advocate sat down with Rev. Lennett Anderson, senior pastor of the church. We talked about the rally, the courage of Ms. David, shopping while black, racism in Nova Scotia, and a whole lot more.

On the courage of Ms. David, and how the church became engaged

Rev. Lennett Anderson: Ms. David started on her own, and she represented herself through the entire case. Meanwhile Sobeys had the full support of its legal counsel.

Imagine that, a single parent, missing all these days from work to have her name cleared. Think of all the complex legal jargon that was circling her as she was sitting there, while all she was saying was ‘I just want to tell my story,’  the simplicity of that message…

To our shame I must admit we were watching from the sidelines. In 2009, we as a community would tell her how proud we were of her fighting the good fight, but that was all. I didn’t show up at any of the hearings. As a community, while we gave some verbal affirmation, we didn’t really do a lot.

Then we were so disheartened to hear that Sobeys was appealing the decision. And so then we said, ‘we didn’t do anything for the last six years, but now we have to stand with her.’

I just said ‘wow’. On the pervasiveness of racial profiling in Nova Scotia

Rev. Lennett Anderson: As I stood there at the rally that Monday, what was disheartening was the number of stories that people were telling.

I just said wow. It just showed how prevalent a truth racial profiling is in our society.

We have people that tell me that they change their address on their resumé because they don’t want it to say Pockwock Road. So we will put down Bedford.  Hoping for an opportunity to get into the door.

I was so pleased when I received that call from (former Lieutenant Governor) Mayann Francis.  She told me she would attend, but not hold a sign. I said, ‘your very presence will speak.’

I am speaking reality. This is true

I am not demanding that Sobeys stop the appeal. They have all the judicial right to appeal. What we are asking as a community is that if their problem  is with the process, than take the NSHRC to task on the process. Don’t drag an innocent lady through that process again. Why revictimize the victim?

I find it ironic that Sobeys is crying bias in a racially-motivated case. Sobeys was found guilty of racial profiling and yet they are crying bias. The irony of that.

They are sending a message, deliberately so or not, that they don’t believe that racial profiling is an ill in society that needs to be corrected.

On the day of the protest two managers and the communication person from the head office in Stellarton greeted me, minutes before the demonstration, and asked me to please come inside and have a conversation to find out what this is all about.

Again, not even an acknowledgment that what happens is true. As if I was speaking hypothetically, theoretically. But I am speaking reality. This is true.

We have been writing letters since November, to which there was no response. I said I can’t go inside, I’d miss the demonstration!

The most recent correspondence from their legal counsel in Toronto to mine is that I should redirect my energies away from Sobeys, because if racial profiling is such a problem than I need to take that up with the Retail Council of Canada (RCC).

‘We would encourage your client the Rev. Anderson and the Convention of Atlantic Baptist Churches to pursue the RCC and get this matter addressed in all retail stores, and leave us alone.’

Again, not even an acknowledgment that what happens is true. As if I was speaking hypothetically, theoretically. But I am speaking reality. This is true.

Race is not a card I play, it’s the life I live

Rev. Lennett Anderson: I just celebrated my 40th birthday. I wasn’t even  thought when Dr King was assassinated, on April 4th  we honoured the 48th anniversary of his death. I am a seventies baby, yet I heard about the I have a dream speech. My parents told me about it. I want to know when the dream becomes a reality, when I will no longer be judged by the colour of my skin but by my character.

For me it is not about wearing my race on my sleeve, I live inside the skin.

After 48 years I still have to carry a sign, sing spirituals and have a demonstration where we talk about the I have  a dream speech. I really would like to wake up from that dream.

I was just telling somebody how hurt I was by a friend who said, ‘Lennett, it just seems that every time something happens in the community you all play the race card. I was taken aback. I responded, ‘race is not a card I play, it’s the life I live.’

For me it is not about wearing my race on my sleeve, I live inside the skin. That’s the reality. This is the lens through which I see life. That’s one of the hard things for me.

Rev. Lennett Anderson: I am a proud African Nova Scotian. I love my community of Upper Hammonds Plains. We are descendants of the arrivals of 1812, we came as freed refugees. we arrived here in April of 1813.

That makes me a 7th generation Nova Scotian. And I am the 19th pastor of this historic church. This is the church I was born and raised in. My mother went in labour on a Sunday morning in the choir.

The church has to regain its voice of advocacy.

The church was always the safe haven for us. That’s why the protest is so important. We have been silenced long enough.

Andrella David was accused in 2009, and we said nothing. But when the verdict came out, and the appeal, we had a duty as the church to give voice to the reality, to break the silence, and to go back to our original mandate of bringing a message of hope, of peace and reconciliation, of love and equality.

The church has to regain its voice of advocacy. In many of our black communities the minister was the most educated person, so the minister often became the voice for the community.

I heard the stories of my parents, of my grandmother who is from Africville and still tells me how her furniture was taken out on garbage trucks, I heard those stories. I always say to my kids, our history is a place of reference, not a place of residence. I don’t want to live in that, I want to point to that.

My grandparents, my parents, they had to face the harsh realities of society, going to work, cleaning other people’s houses, taking care of other people’s children, being called names, being mistreated, having different water fountains.

But the church gave them a haven, it gave them hope. Church allowed them to shake off the heaviness of the week and put their hands together and surrender to rhythm and joy, sing all the signal hymns of a better day. In that vein, I want to give people hope, I want to give a living message that there is a better tomorrow.

At the end of the day we did break the silence about racial profiling in Nova Scotia, created some dialogue. I would love to see Ms. David removed from the process. I’d love the RCC to say there is an issue, and it’s a not skin-deep issue, it’s a bone-deep issue.