KJIPUKTUK (Halifax) – These two episodes are extracted from a longer conversation I had with John (not his real name). John lives with a chronic illness that makes him entirely dependent on social assistance.

People are constantly telling me stories like these. Disbelief fades after hearing similar anecdotes over and over. Busy doctors do refuse to deal with the Community Services bureaucracy.  People do lose their benefits because of sloppy paperwork by exhausted caseworkers.

We know little about the daily realities of people receiving social assistance.  I hope stories like these can shed some light on it. Expect more of these quick reality bites in the future.

How many steps can you walk? 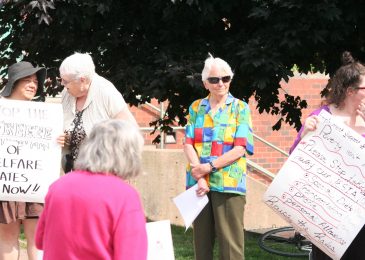 I was cut back by Community Services because my doctor doesn’t want to deal with part of my medical forms.

The specific part my doctor has trouble with is the question ‘how many steps can you walk,’ that’s an actual question on my medical form. My doctor is adamant that he is not going to fill it out. He says, “what am I supposed to do, follow you for a day and count your steps?”

Prior to my doctor’s refusal I was getting money for bus pass. After that they would only fund bus tickets.

My doctor pointed out several times that it is clear as day that Community Services does not have doctors on staff. If a doctor was involved with that evaluation form, a doctor wouldn’t ask questions like that. So we have non-medical professionals put out medical questionnaires for doctors.

Why do they even have that how many steps foolishness on the form?. For one thing, a person could walk pretty good one day, and the next day be barely able to walk.

Booted off the system

While my mother was without a caseworker her benefits expired, and she was booted off the system.

Nobody noticed, because she didn’t have an assigned caseworker at the time. If it wasn’t for me contacting Community Services nobody would have known. She wouldn’t have known to do anything. She doesn’t leave the house, she doesn’t talk to people and she has bouts of depression. She has just a 6th grade education on top of it all.

For someone like her, she doesn’t get her money, that’s it. How are people who are dealing with mental health issues supposed to comprehend that on top of all the issues they are dealing with now they also don’t have any money to support themselves?

It’s hard enough for someone like me to deal with this horrible system. Try to put yourself in the frame of mind of someone who also has mental illness or depression, and then try to deal with it.