KJIPUKTUK (Halifax) – There is an epidemic of drug overdoses in Nova Scotia that this year is killing people at a rate of one death every four days.

Think about it. In 10 years a staggering 600 Nova Scotians died, and we find out through a leaked email. In fact, it appears that tracking such overdose deaths in a systematic fashion would be useful never occurred to bureaucrats and politicians during all these ten years. 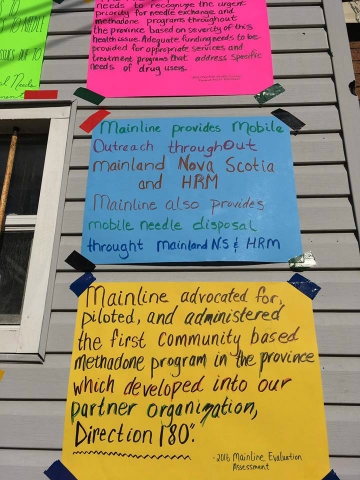 So far this year 70 Nova Scotians have fatally overdosed, Dr. Gus Grant, the registrar and CEO of the College of Physicians and Surgeons of Nova Scotia tells the CBC. And it’s only October.

A looming fentanyl crisis expected to arrive here will only push these numbers up even higher.

Imagine the uproar had such numbers of deaths occurred in any other group in our population. Reporters would be on it all the time. Politicians would talk about it incessantly. Money would flow.

Not so if the people who die are drug addicts, marginalized and often poor.

Earlier we wrote about federal cuts threatening the existence of the Ally Centre in Cape Breton, a Sydney-based organization that supports drug users and people who have unsafe sex. Despite protests the feds aren’t budging, and appeals to the provincial government to step up so far appear to remain fruitless.

The Nova Scotia Advocate also recently reported that the Mainline Needle Exchange in Halifax, in ways the Ally Centre’s mainland counterpart, is facing budget issues as well, and has not yet received a response after it appealed for additional provincial funding.

70 Nova Scotians died, and their deaths might well have been prevented. Not all of them, but surely some.

A couple of weeks ago we talked to Natasha Toueshard, an outreach worker with Mainline Needles Exchange, this is what she told the Nova Scotia Advocate.

“It’s very simple, really. People who use drugs are somebody’s daughter, they’re somebody’s son, they all have loved ones, and people that love them, and they all matter. They are Nova Scotia citizens, and they deserve to be taken care of just like anybody else.”

Simple to us, maybe, but not to politicians in Ottawa and Halifax.

Follow the Ally Centre and the Mainline Needle Exchange on Facebook to find out what’s happening and how to support these organizations.

And if you can, please support the Nova Scotia Advocate so that it can continue to cover issues such as poverty, racism, exclusion, workers’ rights and the environment in Nova Scotia.

Previous Post Lives on welfare: I have this incessant need to fight

Next Post Muskrat Falls: “It’s not empty, it is people’s home”