KJIPUKTUK (Halifax) – The treaties between the Mi’kmaq and the Crown are peace and friendship treaties, not land transfer treaties. They were, and are, agreements about mutual protection and trade between equal nations. 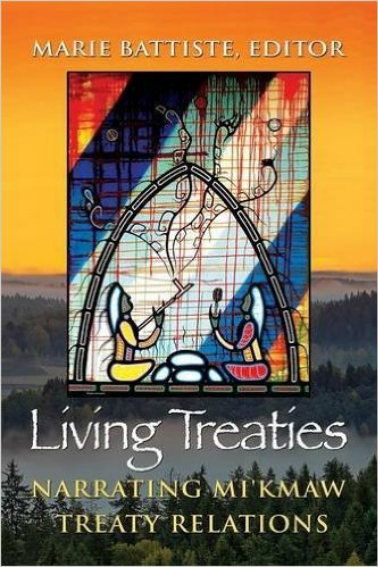 That’s not necessarily the Crown’s version, but it is what Mi’kmaq have always understood to be the case, and courts are slowly and often grudgingly coming to accept that interpretation as well.

A new book, Living Treaties. Narrating Mi’kmaw Treaty Relations, a bundle of 17 essays by mostly Mi’kmaw authors, offers insight in how this interpretation of treaty relationships has always remained alive within the Mi’kmaw community.

It also documents the Mi’kmaq-led campaigns to sway courts, politicians and public opinion. Quite a few of the contributions to the book are from people who were front and centre in these battles, people whose names and activities are mostly unknown among non-indigenous Nova Scotians.

Many of the writers mention how treaties were a regular topic at their kitchen tables. While white society was all too happy to delegate the treaties to stuffy archives, Mi’kmaq kept the treaties’ meaning and significance alive over the years, even while racism and the push towards assimilation were at its most relentless.

For instance, there is the story of Grand Chief Gabriel Sylliboy, as told by Jaime Battiste, a lawyer and member of the Potlotek First Nation.  In 1927 Sylliboy was charged with trapping muskrat out of season. Rather than pay the fine, he was determined to fight the charges, asserting his treaty rights as a Mi’kmaq to hunt. This is even more remarkable given that Sylliboy barely spoke english.

The odds and the times were very much against Sylliboy, and a racist court rejected his arguments. The Mi’kmaq were nothing but “savages, whose rights of ownership were never recognized,” the judge wrote. It took until 1985 for the courts to recognize the validity of that treaty, and much longer for the notion of Mi’kmaq hunting and fishing rights to gain some legal traction.

Prominent in that later fight was Alex Denny (1940-2004), the charismatic president of the Union of Nova Scotia Indians (UNSI) and kji-keptin of the Mi’kmaw Grand Council. His name keeps coming up in the book, and for good reason.

One of Denny’s important views was that treaties must be central to any attempt to promote Mi’kmaw land rights and language protection.  He also believed that the British written treaties were not the only version that should have legal bearing, and that oral traditions around the treaties in Mi’kmaw culture are at least equally relevant.

It was this vision, together with strategic smarts, and by all accounts Denny’s charisma, that helped push the Mi’kmaq agenda forward on many fronts.

Underlying the Mi’kmaw treaties is an entire worldview, and some of the book’s most fascinating essays shed light on what that is all about. Treaties are about relationships, writes Patrick J. Augustine. Netukulimk or the code of conduct that values stewardship underlies relationships between people just as much as relationships with animals and the environment.

Kerry Prosper, who was featured in one of our weekend videos, fleshes that idea out in a very concrete and immediate fashion. His Born to Fish is full of memories about fishing, and outsmarting fisheries wardens for that matter.

A quick review can never do justice to the complexities of a book that contains seventeen essays by as many authors.

Read this excellent and enjoyable book if you want to know more about the friendship treaties between the Mi’kmaq and the Crown. You’ll be impressed by the depth and wisdom of the treaties, and by the skills and fearless effort of countless Mi’kmaq to ensure that they would never be forgotten.

if you can, please support the Nova Scotia Advocate so that it can continue to cover issues such as poverty, racism, exclusion, workers’ rights and the environment in Nova Scotia.