For this installment of Lives on Welfare we publish a letter by a middle-aged man who is on social assistance and lives with Crohn’s disease. He relates two experiences with Community Services while he was pursuing an education. His first story is about a tutor he didn’t need, the second one is about the computer he did need. This story is based not on an interview, but on a letter submitted to the Nova Scotia Advocate.

The tutor I didn’t need

This is about Community Services stonewalling me and wasting my time as I was trying to get myself going through school. I told the Community Services people that were looking after this kind of thing that I had no time to waste. I was already  in my fifties and getting older. 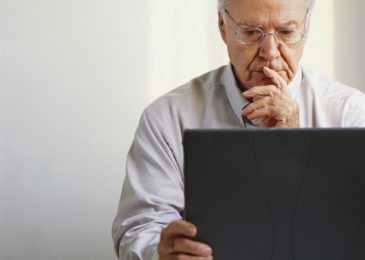 Since I had been out of school for many years Community Services thought it best that I have this tutor to help me to prepare for high school work. Never mind that I came first in Grade 9 and always did well in school. That said, I went to see this tutor down at the Nova Scotia Hospital site, I think it was three times a week.

It soon became apparent to me that this tutor was a waste of time as I was smarter than this lady teaching me. She was not teaching me anything that I did not know.

I became very adamant that I wanted to go to a regular school but Community services was against that idea. I was not having that. I felt like they were trying to interfere with me obtaining my educational goals or discriminating against me because I had Crohn’s disease and the ileostomy bag.

Just for the record, people with Crohn’s disease are not contagious and the ileostomy appliance does not smell.

Anyway, I put up a big fuss until I got a chance to attend the Flexible Learning and Education Center (FLECs) . The principal there wanted me to take online learning but I was not going to do this. I wanted to be treated like everyone else and sit in a classroom with  the other students.

FLECs has a course called ” Learning Strategies” in grade ten. This is a credit course that a student can use to put toward obtaining their high school diploma. I passed this credit and all the rest of my grade ten and most of the rest of the subjects that I took with decent marks. I even got a perfect 100 % mark in Geology that is a 100 percent everything right in that whole semester.

I have my high school transcript right before me, looking at it now. I got a 94 in learning strategies, an 87 in Applied Information Technology, a 95 in Canadian history, just to list a few of my marks.

Community Services in their poor judgement never wanted me to get away from that tutor in Eastern Passage. I could not earn a credit there and it was a fight to get my education going properly.

2 – The computer I needed

That was the first thing I wanted to tell you about, Robert. Now this is the second thing. When I was attending school Community Services  had a program called the EAPD program. That is an acronym for Employment  Assistance for People with Disabilities. This program was to help secure the scholastic needs of people attending school.

I needed a computer for school. I was having terrible food insecurities  at the time and I told them that I could  not deal with all the homework, writing papers by staying for hours after school or arriving earlier in the morning to use the school’s computers.  I just did not have the energy to deal with this.

My energy levels back then were a bit better than they are now. I have lived with Crohn’s disease and its insidious inflammation affecting my body for 24 years now.

Through this whole process when I implored Community Services to help me, they would not raise a finger to help me to get a computer for my home use- school work.

Okay, I was not going to be deterred by Community Services’ stonewalling of me. I wanted that high school diploma and I was going to make a fight of it. I applied and was successful in getting a nice computer and computer desk from the Opportunities Fund for People on Disability (run by the federal government).

I had to go through their process and interviews to explain to these people why I needed help in getting a computer for my school work.  The opportunity folks were very understanding of my medical problems and my sincere desire to better myself educationally. I worked with Staples on Gottingen Street and the Opportunities Fund people to pick out a computer and desk at Staples.

I must say at this time without that computer, and without the internet access that was paid for by Community Services, I would not have my high school academic Grade 12 .That computer was a critical factor in why I succeeded as I had so much work to do it was unreal. Up to my eyes in work.

Now here is the kicker . When I told Community Services that I got the computer then they decided to send the opportunities fund the sum of 500.00 dollars to help with the cost of the computer that was already paid for.

Community Services just wanted to get on the band wagon, wasn’t that nice of them. They  frustrated me almost to tears trying to reason with them.

It was the same thing when my school work required a graphing calculator and when I needed  a student and teacher edition word processor to facilitate me doing my papers that I had to write; it was the same thing. It was always something from a program that was supposed to help hard-working students like me to succeed.

Anyway, I got my GED in 2002 and my High School Academic grade 12 diploma in 2007 from NSCC Akerley campus. I took three courses up there. I think it was just lucky that I even graduated at this time as I was really having problems with fatigue.

Next Post Truth and Reconciliation in Nova Scotia’s classrooms. We must do better, petition demands