KJIPUKTUK (Halifax) – When land protectors occupied a building inside the Muskrat Falls site, and others went on a hunger strike, the mega power generating project in Labrador briefly made national headlines.

But national interest quickly faded after it was announced that indigenous leaders had reached an agreement with the provincial government.

However, peace and quiet did not return to Labrador. 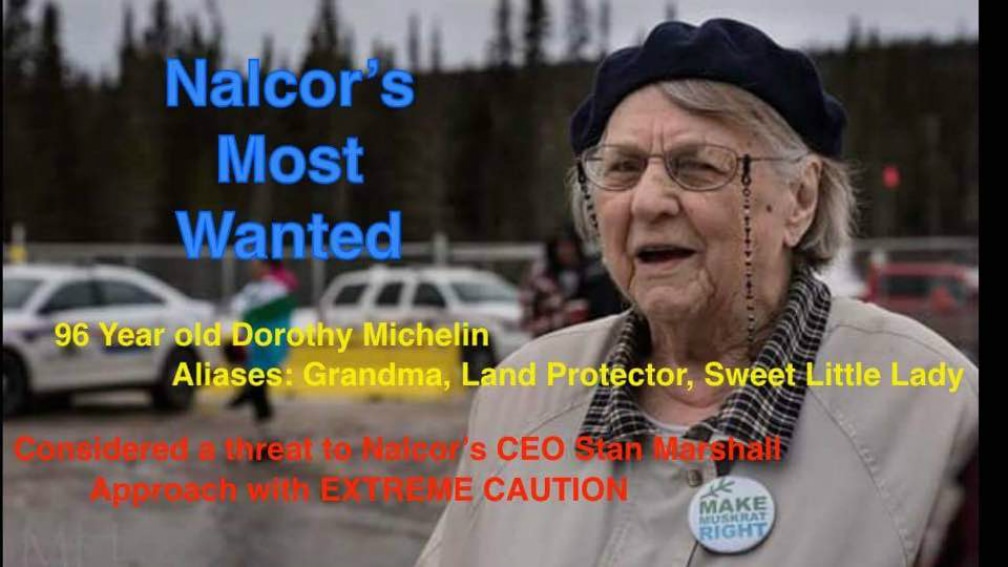 Yesterday court sheriffs were directed to bring an additional 25 people, including hunger-striker Billy Gauthier, to the Supreme Court for breaching an order that forbids protesting near the Muskrat Falls site.

Nalcor is even going after a 96-year old Labrador woman. Yesterday Dorothy Michelin was served at her home for violating the court order when she visited a peaceful protest at the gate leading into the Muskrat Falls project on Saturday.

“She went to the protest site with one her daughters to tell everybody (they did a ) good job, and to get her picture taken,” says Ossie Michelin, a freelance journalist, videographer and photographer. Dorothy is Michelin’s aunt.

People were protesting at the gate accessing the Muskrat Falls development. You’re allowed to stand on the other side of the road, but people who cross the road sometimes are served with an injunction, says Michelin.

Independent researchers from Harvard University, Memorial University in St. John’s, and the University of Manitoba had raised the alarm about the accumulation of methylmercury downstream from the Muskrat Falls development.

Particularly at risk will be Lake Melville, a large body of water surrounded by Innu and Inuit communities.

The study suggests that if the proposed reservoir is not fully cleared of vegetation people will be forced to relinquish traditional food sources, such as seal, fish and waterfowl, that they relied on for thousands of years.

After negotiations with leaders of the Innu Nation, the Nunatsiavut government and the NunatuKavut community council, the provincial government announced that it would reconsider clearing the future Muskrat Falls reservoir area of wood, brush, vegetation and topsoil to counteract the presence of methylmercury. It also promised that future decisions will be made in consultation with the indigenous stakeholders.

But for many land protectors that wasn’t good enough.

“Because the government and Nalcor acted in such bad faith for so long people don’t believe them. Rumors are flying and people get really agitated, it’s a very volatile situation right now,” says Michelin.

An appeal to Nova Scotians

Nova Scotia stands to reap considerable benefits from the Muskrat Falls project. Labrador electricity will reach Nova Scotia via the Maritime Link and substantially decrease our dependence on coal-generated electricity.

But fewer people are willing to call electricity generated at Muskrat Falls  green energy these days.

Michelin wants Nova Scotians to recognize that this energy comes at a cost. A cost paid by indigenous peoples and the people of Labrador in a life-changing manner.

“We are Canadian citizens as well, we are your neighbours, in a sense. Just imagine if this were to happen in your own backyard. This development is poisoning many people and animals. Flooding such a large area is erasing people’s history and culture and attachment to the land,” says Michelin.

“It’s not that we are against development,” Michelin explains. “If they were to do it in an environmentally sound way, it would be okay. I’d still be sad to lose my father’s trapping grounds, which are now under water, but at least we wouldn’t be poisoning anybody.”

Michelin draws an analogy with Nova Scotia’s deep connections to the fisheries and the sea when appealing to Nova Scotians to start paying attention to what is happening in Labrador.

“This is our food stock, our fish and our seals,” he says. “If you could go back in time, wouldn’t you have done what you could to prevent the collapse of the fisheries? Now you can help prevent such a disaster elsewhere.”

The Independent, a Newfoundland and Labrador online publication, has been providing extensive coverage of the indigenous resistance to Muskrat Falls. Your very own Nova Scotia Advocate has written quite a bit about the Nova Scotia connection.

Next Post Child poverty in Nova Scotia. Another year, no improvement