Did you ever go to bed and wonder if your child was getting enough to eat? …I go to bed and he would start crying in the night and I would think that he was hungry. —Nova Scotia mother, quoted in the 2013 Report Card on Child and Family Poverty in Nova Scotia.

KJIPUKTUK (Halifax) – In 1989 the House of Commons pledged to eliminate child poverty by the year 2000. No more children going to bed hungry and cold or going to school without a warm winter coat. No more worries and despair for the parents.

Well, that’s not how it turned out.

In Nova Scotia there are 24.3 percent more kids living in poverty today as there were when Ottawa parliamentarians unanimously passed their motion 25 years ago.

That’s one of the conclusions of the 2016 Report Card on Child and Family Poverty in Nova Scotia.  It’s an annual report issued by the Nova Scotia chapter of the Canadian Centre for Policy Alternatives (CCPA). This year’s sub title is Another year. No improvement, and that sort of sums it up, at least for 2014, the last year for which data is available.

Nova Scotia continues to sadly kick butt when it comes to comparisons with other provinces.

Earlier this year we wrote about how Nova Scotia saw the highest increase in food bank use nation-wide, and how our poverty rates are the highest among the Atlantic provinces.

The CCPA report adds another such record to our embarrassing award case cabinet. In 2014 Nova Scotia experienced the third-highest provincial child poverty rate, and the highest rate in Atlantic Canada.

The following table zooms in on the various Nova Scotia communities. 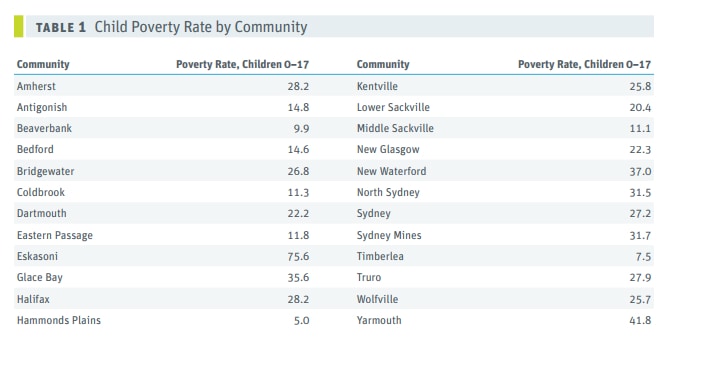 “Child poverty rates range from as low as 5% in Hammonds Plains to as high as 75.6% in Eskasoni. Six communities have child poverty rates over 30%–five in Cape Breton (Glace Bay, New Waterford, North Sydney, Sydney Mines, and Eskasoni) and the other in Yarmouth (41.8%),” the report points out.

Indigenous children, racialized children, immigrant children, and children with disabilities experience higher rates. The same is true for very young children.  In 2014, for children under 6 in Nova Scotia, the child poverty rate was 27%, close to one in three young children, compared to 22.5% of all children, the report states. 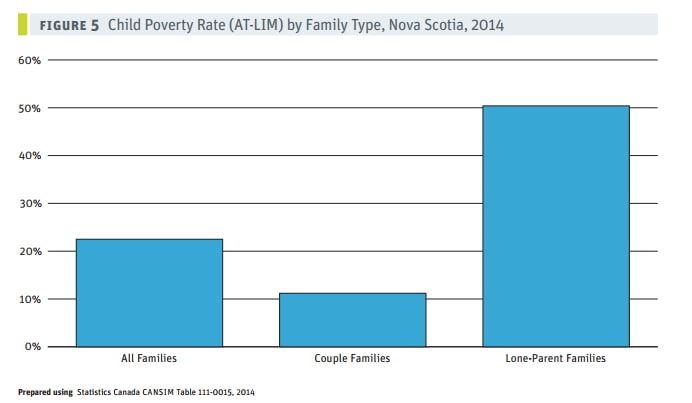 There is a very sad section on extreme child poverty in Nova Scotia. Not only do many families live below the poverty line, they do so by a high amount.

The most extreme poverty conditions are experienced by low-income lone parent families with two children. The report suggests that such families would need an extra $875/ month to bring them up to the poverty line.

Not surprisingly children whose families rely on welfare are also very hit hard. That the rates urgently need to be raised in a meaningful way is something that should be obvious but has been ignored by a long line of provincial governments.

Because hope springs eternal the report makes several suggestions to tackle the persistent problem of child poverty in our province.

Given that about 40% of children living in poverty in Nova Scotia live in a family with at least one full-time/full year earner, raising minimum wage ($10.70/hr) to something approximating a living wage, calculated to be around $20.10/hr, would be a step in the right direction, the report suggests. Strengthening labour standards and the EI system would also be helpful.

Social assistance benefits are insufficient, and the report doubts that the May 2016 increase of $20/month will lower the child poverty rate either, as the median income of low income families on income assistance in Nova Scotia are approximately $800/month below the poverty line.  Shelter allowances haven’t increased for a long time, although rents certainly have, adding to the financial stress families on welfare face on a daily basis.

The report also calls on the federal government to increase its cost sharing arrangements for social programs.

As well, the report calls on the province to follow in the footsteps of British Columbia and Ontario and stop the clawback of child support/maintenance payments of parents on social assistance.

If you have a bit of money just sitting around, please support the Nova Scotia Advocate so that it can continue to cover issues such as poverty, racism, exclusion, workers’ rights and the environment in Nova Scotia.