KJIPUKTUK (Halifax) – Recent articles examining the prevalence of sexual assault cases in Canada that have been dismissed as unfounded have led to more scrutiny of how these types of crimes are handled by the criminal justice system in Nova Scotia.

The Unfounded classification means that police determined that the reported violation did not happen. 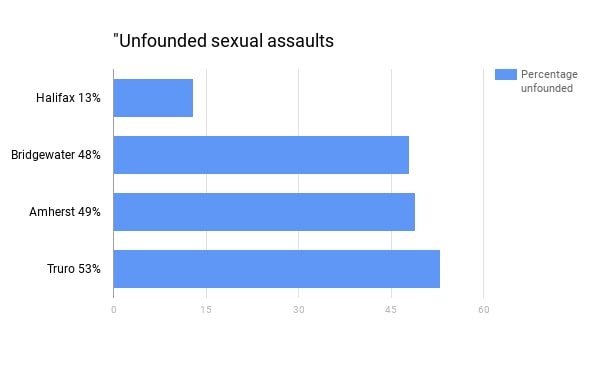 Truro: Surprised that our police service had such a high number

Truro, with a rate of 55%, had the fourth highest rate of unfounded cases in the country, which Truro Chief of Police Dave MacNeil says was a cause for concern.

“I was surprised to see that our police service had such a high number of cases cleared as ‘unfounded,’” MacNeil says.

MacNeil stresses that it is important to understand clearly what it really means when a case is cleared as unfounded.

“Unfounded does not mean the police do not believe a victim or person reporting. All reported incidents are fully investigated,” he says.

According to the Uniform Crime Reporting Index, a case is cleared as unfounded after officers conduct an investigation and determine that a criminal offence did not actually occur.

MacNeil was concerned and arranged for an internal audit of all sexual assault files from 2010 to 2016. While all of Truro’s 97 unfounded cases were found to have been “properly and thoroughly investigated” according to MacNeil, he did mention that part of the problem was with the way in which these cases were originally filed.

“The internal audit has shown that several of these files should have been classified as something other than sexual assault, for example assistance to other agencies. In the future we will be classifying similar files under those categories,” he says.

MacNeil says that he plans on sharing the findings of the internal audit with the Colchester Sexual Assault Centre in order to bring them up to date with their findings and ask for feedback.

MacNeil also mentions that going forward, they will be reviewing how all cases are filed to ensure that they are cleared “using the most appropriate clearance status provided by the Criminal Centre for Justice Statistics,” including the status of “unsubstantiated” which was announced by the Statistics Canada branch in August of 2016.

MacNeil believes that once he and his staff utilize these new guidelines for classifying cases of sexual assault in the future, the total number of unfounded sexual assault files will be reduced.

“The Truro Police Service want to reassure the community that we take these investigations seriously and are always looking at ways to improve our service deliver to the public,” MacNeil says.

Amherst: I cannot explain why our percentage is significantly higher

Ian Naylor, the Chief of Police in Amherst, says that he needs more information if he wants to explain why the rates in the Amherst region are so high.

“At this point I cannot explain why our percentage is significantly higher than the national and provincial averages,” Naylor says. “The numbers alone do not confirm there is a problem, however they do raise a concern which requires our department to conduct a thorough review.”

Bridgewater: I have no concerns

Scott Feener, the Bridgewater Deputy Chief of Police, has a different take on the issue.

“I do not have concerns in the manner of which our investigations are conducted and scored,” he says.

Feener believes that part of the reason why the rates of unfounded cases in the Bridgewater area is so high is because the Globe’s request for information was “a blanketed request for all types of sexual assaults.”

“A number of our sexual assaults are reports about young persons,” Feener says. “These types of files are conducted jointly with Family Children Services and are very difficult to investigate, as they typically require the young person to make some sort of disclosure of an incident. If no disclosure is made, the file is scored unfounded because we cannot substantiate whether or not a sexual assault occurred.”

Plus, Feener says, the guidelines for classifying case files change from year to year, which affects the ways in which cases are handled.

Light at the end of the tunnel?

The ways in which first responders handle and classify cases of sexual assault in Nova Scotia are in the midst of changing, as the Sexual Assault Nurse Examiner (SANE) program expands its reach so that most of the province has coverage, according to Susan Wilson, the coordinator of the SANE program for the Halifax region.

Currently, there are SANE programs based out of Halifax, Antigonish and the South Shore, but the program will be expanding to include more regions such as Cape Breton, the Valley and Yarmouth.

“That’s all been started actually, Wilson says. “Coordinators have started, policies are being developed and nurses will be hired and trained very soon.”

In the meantime, Wilson says that it is paramount for those who have experienced sexual assault to understand that these high rates of cases that have been cleared as unfounded does not necessarily mean that police did not believe the victims, to remember that they were investigated before being classified as such, and to dispel the myth that police are more likely not going to believe your allegations if you come to them with a case.

“(We must) look at the context, and not frighten our society into thinking that people are not going to be believed,” she says.

See also Part 2 of this series: a full interview with Susan Wilson.

Click here for a full list of all Nova Scotia police detachments that provided stats to the Globe and Mail.

Previous Post Some people on welfare could receive less in future, presentation suggests