KJIPUKTUK (Halifax) – A Community Services presentation suggests that the proposed revamp of social assistance may result in some clients receiving less than they do now.

The presentation, delivered by the department in November 2016 to stakeholders, talks about the need to simplify the welfare system.  It then discusses a Universal Basic Income, a Guaranteed Minimum Income, and a Standard Household Rate.
Subsequent slides suggest that implementing a Guaranteed Minimum Income, let alone a Universal Basic Income are not realistic options for the immediate future.

With no additional funding some clients will receive less

Which leaves the Standard Household Rate. Under that system a base rate would be given to all Income Assistance recipients, rather than all the individualized allowances that people currently receive based on their specific needs and situations.  Basic rates and shelter allowances would be rolled up into one payment.

Other special needs payments could still be allocated to individuals on top of that standard rate. For example, and I am making this up, the department could decide to continue to add a special diet allowance on top of the basic rate, based on an individual’s need. 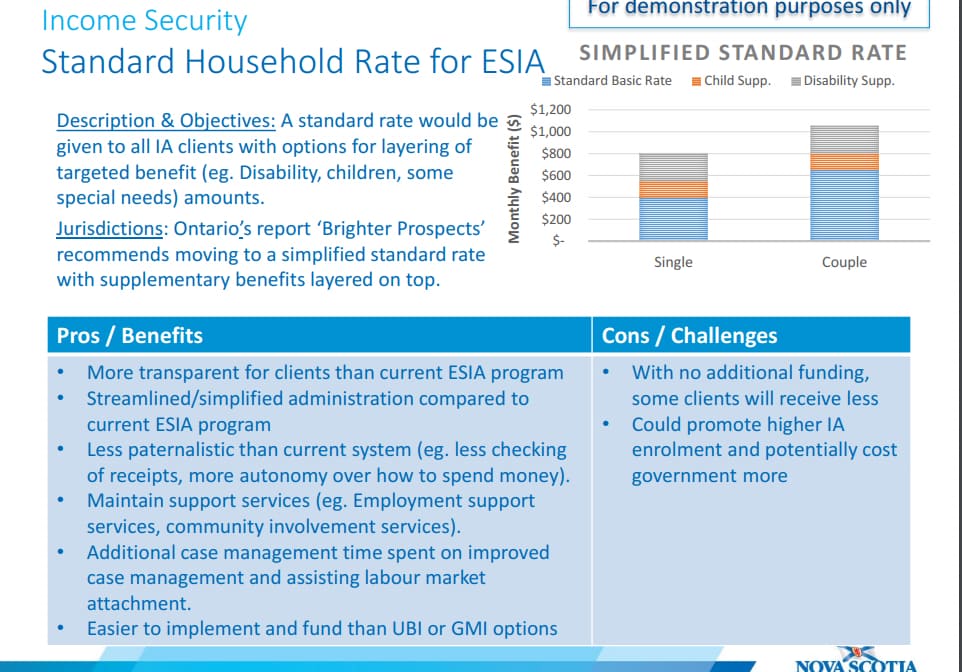 There are advantages to this approach, says the department. It’s easier to understand, would require less bureaucracy, and would free up caseworkers from administrative tasks.  Most recipients would agree with that.

But there is a catch. “With no additional funding some clients will receive less,” the presentation suggests.

This statement is worrisome, especially since people who attended the meeting were also told not to expect that new funding would be made available.

There is consensus among welfare advocates that current rates are way too low. But that sentiment is not shared by Community Services.

“Total level of income is more generous than generally understood,” another slide suggests, pointing at a variety of tax credits, child care subsidies, the Heating Assistance Rebate Program, and so on, that are available for low income Nova Scotians.

That slide even lists food banks as a support, suggesting that charity is now a legitimate here-to-stay component of the poverty support landscape.

“As part of the discussion on a Standard Household Rate, the adequacy of income rates was reviewed. The information on the slide presentation is meant to drive the discussion about constraints of potential models. It is not meant to suggest any conclusion or decision by the Department,” writes Heather Fairbairn, spokesperson for the department.

“The point is not meant to indicate any criteria for what specific households would receive within the model being discussed,” Fairbairn writes. “To date, we are in the process of reviewing the entire benefit structure. We expect this work will be completed within the next few months.”

In 2015 Community Services announced that it wants to change how social services are designed, delivered, and managed within the province.  Tenders for external consultants to assist with these changes are worth $1.5 million, the CBC reported at that time.

Since the project initiation the department has been criticized for not really listening to people on assistance. As well, critics fear that what’s really driving the initiative is a desire to push people off the welfare rolls.

Previous Post Kendall Worth: My caseworker questioning my doctor is a human rights violation