Grass of the Commons

You weather it all.
You are stoic, resolute.
Decorous as a monarch
and equally imperial.

For you are not indigenous.
You were deemed prettier
than the broom straw,
wild rye, and marsh grass
that once thrived here.

So they brought your seeds
from Europe, watched you spread
like the pox.

The grasses of this continent
fled to the hills, cowered in
crannies, sprouted like hair
from the spines of boulders. 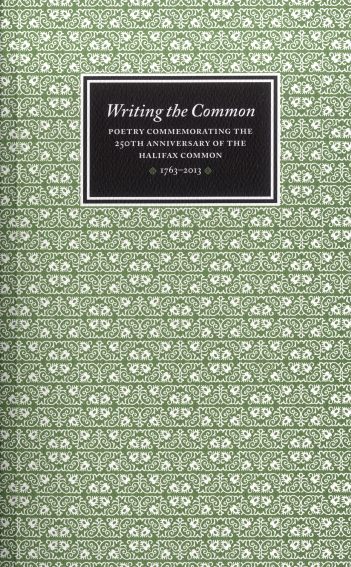 troduction to this wonderful little book tireless defender and Friend of the Common Peggy Cameron quotes Ruth Holmes Whitehead’s The Old Man Told Us as a reminder that on settlers’ arrival the Common was anything but Terra Nullius, and definitely contained more broom straw, wild rye, and marsh grass than today.

1800: Mrs. Andrew Paul (born ca. 1831), of Tufts Cove, Dartmouth, now about 84 years of age (in 1915) says her grandfather Toney trapped beaver with wooded dead-falls at Black Duck Pond (Egg Pond) on the flat part of the Commons at Halifax. … Her father Joe Toney, who died at age 102 years, was the last man to kill a Moose on (what is now) the Halifax Common near the Pond.

Writing the Common includes poems by George Elliott Clarke, Tanya Davis, Joan Dawson, Sue Goyette,  Robin Metcalfe, Wanda Robson and many others. When I bought mine last week I noticed Bookmark on Spring Garden Road had several more copies on the shelf.

David Huebert is a Canadian writer of poetry, fiction, and critical prose. His first poetry collection, We Are No Longer The Smart Kids In Class, was published in fall 2015 by Guernica Editions. Check out his website.

Grass of the Commons is reproduced courtesy of David Huebert

Please support the Nova Scotia Advocate so that it can continue to cover Nova Scotia poets and issues such as poverty, racism, exclusion, workers’ rights and the environment in Nova Scotia.

Next Post Community Services: We cannot fix this unfairness for bureaucratic reasons