KJIPUKTUK (Halifax) – Adjusted for inflation Nova Scotians on welfare have seen no improvements over the last 30 years, and in real dollars many are much worse off than they were in the nineties.

That’s one of the conclusions in the Welfare in Canada, 2016  report issued today by the Caledon Institute of Social Policy.

Note that in Nova Scotia welfare was a municipal responsibility until 1997, and the report uses Halifax numbers, which were higher than elsewhere in the province. 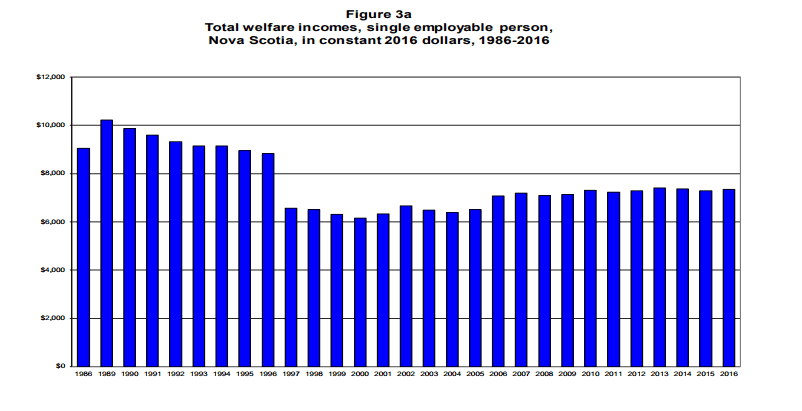 Single persons with disabilities also took a hit over the decades. Welfare incomes began the period at $13,410 in 1989 but decreased substantially to finish the period at $10,181. 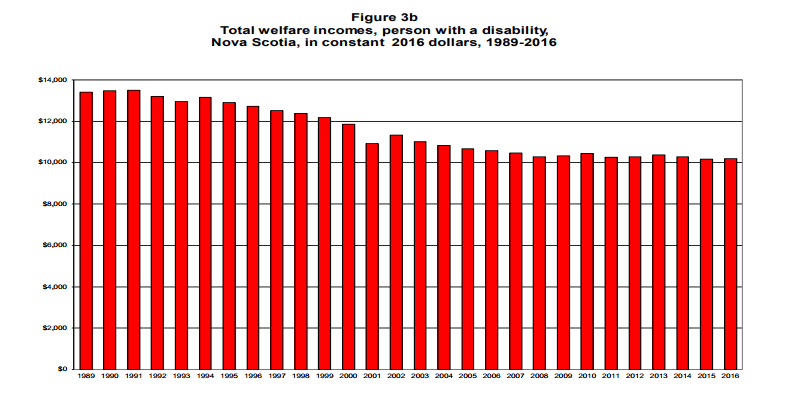 The report also asks the question how adequate these amounts are. One benchmark that is frequently used in those types of calculations is the the Market Basket Measure (MBM.)

MBM is based on the cost of a specific basket of goods and services representing a modest, basic standard of living. It includes the cost of food, clothing, footwear, transportation, shelter and other expenses.

Here is the table that compares what you really need and what you actually get.

How to read this chart: For instance, when you’re a single person with a disability you receive $10,181 in welfare and tax credits. But to live a half decent life you really need $19,125. So you’re short $8,944, and you only receive 53% of what you actually need.