KJIPUKTUK (Halifax) – The raise in income assistance rates that the government keeps talking about will leave many recipients with less buying power than they had in 2016, the last year the rates were increased.

Whenever a story about people living on income assistance in dire straits and going hungry hits the news, reporters dutifully ask Community Services for comment. The answer is always the same. Wait until the Employment Support and Income Assistance transformation is completed, we will raise the rates and things will get better!

That response is so old by now that even former minister of Community Services Joanne Bernard got years of traction out of it, before she was defeated in the last election.

The jury is still out on what the transformation will bring, mostly because we have no idea what it means and the department isn’t telling.

But we do know that the increase in the rates elected officials and bureaucrats keep referring to is a raise in income assistance benefits in 2019, by 2% for people deemed able to work and 5% for people who live with disabilities.

During last year’s election the Liberals mentioned it a lot. Spryfield Liberal MLA Brendan Maguire even managed to make it sound as if the raise was just around the corner, conveniently keeping the 2019 part out of a pre-election Facebook video he made for his constituents, many of whom are on welfare.

The actual dollar figure associated with the raise has also been exaggerated.

Well, turns out the $89 and $93 do not apply to everybody. A departmental slide (below), part of a presentation for internal consumption dated October 2017, suggests those amounts could be much lower. 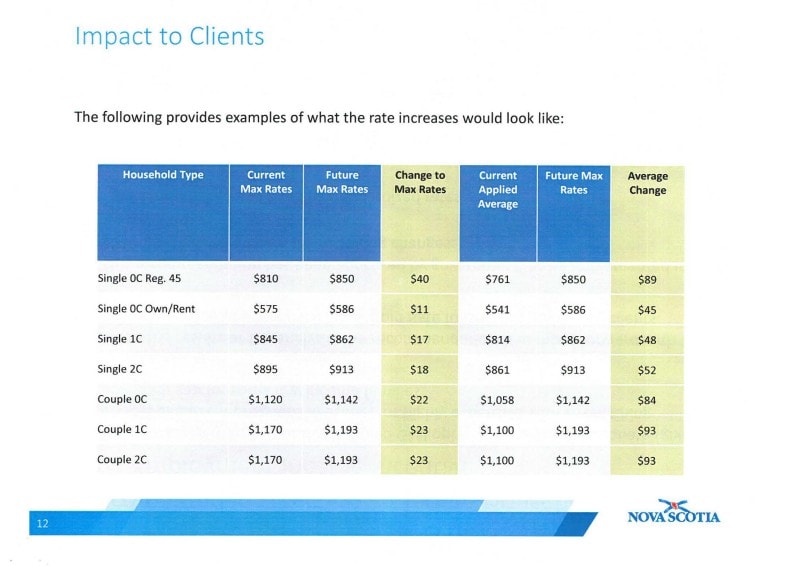 So what do these raises amount to when all is said and done?

Well, life gets more expensive by the day, as people on income assistance know all too well.

That means that if as a single employable individual you were getting the maximum $575 in April 2016, you will need $600.44 by 2019, just to maintain your buying power in the grocery store.

However, all the raise will give you is $586. In buying power you’ll be poorer than you were in 2016 right after the last raise, by something like 14 bucks.

That pattern holds for all the so-called employable income assistance recipients currently receiving the maximum rate. They all lose.

Even the people with disabilities currently receiving the maximum rate, the five-percenters, will barely be better off, and will see their gained increase quickly melt away again in the years after 2019.

And there is more bad news. Whatever the department gives with the one hand it may well take away with the other.

At the Nova Scotia Advocate we continue to hear stories both from community workers and people on income assistance that together suggest that there is a concerted effort to chip away at things like special needs allowances, especially for medical travel. Budget numbers show that this is more than anecdotal.

Still, any increase, no matter how trivial, is better than none at all. So why wait until 2019?