KJIPUKTUK (Halifax) – One of my favourite spots around Halifax is a small, somewhat hidden cemetery at the beautiful Cole Harbour Heritage Park. 40 people are buried there in unmarked graves, all residents of the Cole Harbour Poor Farm, a place where poor people and people living with mental disabilities would be forcibly warehoused under the most terrible conditions. People put some white crosses there to mark its history, and the place feels special and steeped in significance. 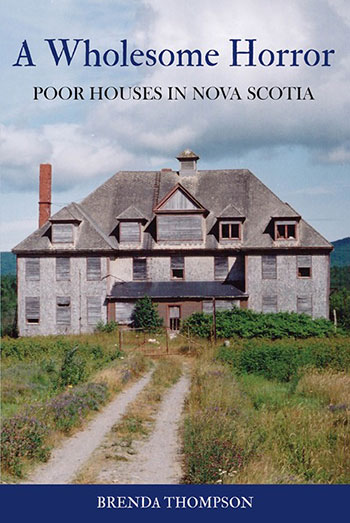 At one time, not that long ago, there used to be poor houses and poor farms all over Nova Scotia. It’s only in the fifties and sixties that municipal and provincial governments closed them down.

Now, thanks to Brenda Thompson, there is an excellent book that describes the phenomenon in all its gruesome detail. There’s a lot of people’s history in A wholesome horror: poor houses in Nova Scotia.

Poor houses is where you ended up if you couldn’t take care of yourself anymore because of poverty and/or mental illness. Once there, you weren’t allowed to leave. If married you’d be separated from your spouse and children. If you were suffering from mental health issues you could be locked up, confined in a dark room, handed food through a small window, in some cases, as Thompson details, for as long as forty terrible years.

If you were able to work you might well be auctioned off by a municipality, to work for the successful bidder who might farm you out for profit in his turn. Sexual abuse of female workers was common in these situations.

As you’d expect in such a book, there is a chapter with details on each poor house in the province, all 30 or so. That’s good stuff, but chapters on the cruel fate of Black and Mi’kmaw poor house inmates, and Thompson’s efforts throughout to dig out authentic first voice accounts of life in the poor house are what make the book so fascinating.

The title of the book, a wholesome horror, comes from a quote by English philosopher Jeremy Bentham (1748-1832), who argued that poor houses be made into “an object of wholesome horror,” because if we’re too nice to poor people everybody would want to be poor, nobody would be interested in a honest day’s work, and society would come crashing down.

I know Thompson not just as a Nova Scotia Advocate contributor, but as a tireless poverty activist and advocate. Thompson in her neck of the woods quietly goes to bat for the many victims of Community Services heartless regime, today’s version of the poor house superintendents of old.

That compassion and anger is evident throughout the book, which includes a short chapter on the currents state of social assistance. That old notion that you must be punished for being on welfare through great suffering and loss of dignity is still very much alive, Thompson believes.

“Provincial legislation turns our social assistance system into its own wholesome horror by making life on social assistance as miserable as possible. Social assistance recipients are required to disclose extremely personal details about their lives and are expected to live on monies that are not nearly enough to meet their basic needs. They are often made to jump through many hoops – including “training”, “workshops”, and “education”, while not recognizing or adequately funding childcare, transportation or eledercare, amongst other needs, and are cut off from benefits without warning or explanation,” writes Thompson.

There’s one historic wrong that could easily be righted when it comes to poor houses, Thompson suggests, and that is how we honour its residents who suffered so much. In Cole Harbour some kind people placed crosses to mark the spot of their burials, but this is not always the case.

The old public library on Spring Garden Road sits atop the remains of an estimated 4,500 paupers. We may not know it, but Haligonians at the time certainly did. The graves were shallow (to save money), and the smell at that part of Spring Garden was often unbearable, Thompson tells us.

“Even in our present time, this fine cemetery (The Old Burying Ground, across the street), receives federal taxpayers’ moneys to restore and maintain the burial place of the comfortably rich, while the poor across the street remain unmarked, unacknowledged and forgotten, simply because they didn’t have any money,” writes Thompson.

A plaque is the least we can do.

A Wholesome Horror. Poor Houses in Nova Scotia. By Brenda Thompson. SSP publications. ISBN 978-0-9868733-5-5. Available at a few selected bookstores, public libraries, and through the publisher. (Also online, through Amazon and Chapters, but hopefully you will find a better way)

See also: How dare you! Brenda Thompson on welfare activism in the eighties

Previous Post Lives on welfare: The system traps you from generation to generation