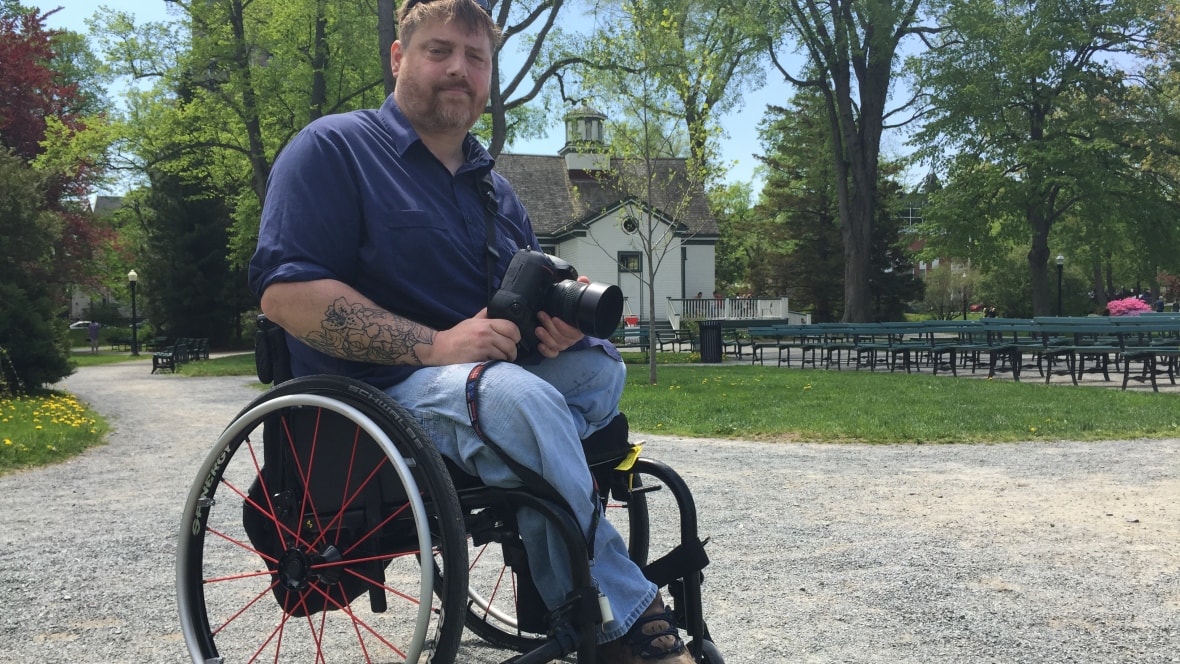 We are pleased to announce that Paul Vienneau is the winner of the 2018 James McGregor Stewart Award.

In a ceremony on June 21st Vienneau will be presented with a $1000 cheque by Gerry Post, Executive Director of Nova Scotia’s Accessibility Directorate (and past winner of the award).

The Award recognizes leadership, effective advocacy and outstanding personal achievement of a person with a disability. “The award honours the resolve shown by Stewart”, says Warren Reed, a co-founder of the Society. “In Paul Vienneau our selection committee found a person that, like Stewart, leads and excels regardless of barriers.  Paul is a force of nature”.

Two years ago we were lucky enough to do a profile on Paul.  You can read it here, but Jeremy MacDonald summed up his impressions eloquently:

Given that Paul has been such an active, engaged and visible citizen of the city of Halifax in recent years, I was quite interested in his thoughts on living in the HRM, particularly as someone with a disability. When asked about this, Paul expressed the view that, “Halifax is slow to change. We drag our feet on the most basic of things, seemingly on principle. It’s like there is a bureaucratic inertia, where moving forward feels like this impossible goal. Once in a while, things start moving and change happens in Halifax. My struggle in the last year and a half has been to find ways to help things move a little bit. It feels like being one of a large group of people pushing a giant boulder up a hill.” I then asked whether he thought of the city as a welcoming space for persons with disabilities, to which he replied, “I find the people of the city to be welcoming, but the part of the city that I live in is literally the side of a hill. People’s good nature will only take me so far. The trick is to translate their friendliness into action and forward momentum to create to create a more accessible city.”

Asked if he had any parting thoughts, Paul answered,” The next time it snows, go out and shovel the walk in front of your house and see if the neighbours need theirs done. If they are elderly or alone, let them know that they are not alone. See if they need anything. One person isn’t going to fix the world, but if a lot of us do small, good things, we can make a big difference.” One thing is certain: Whether you are talking to Paul Vienneau the man, the artist, or the “Asshole with a Shovel”, the conversation is compelling. Don’t take my word for it though. You should do yourself a favour sometime, and find out for yourself.

The Award recognizes the spirit of Mr. James McGregor Stewart who overcame many barriers, despite a disability resulting from polio. First in his class at Dalhousie Law School in 1914, he was also President of the Students’ Council. He was shortlisted for the Rhodes Scholarship but was not successful, due to concerns expressed about his physical condition. Nevertheless, Stewart went on to head a Halifax law firm that became the present day Stewart McKelvey. He was Chairman of Dalhousie’s Board of Governors. In 2000, Canadian Lawyer magazine named him as one of Canada’s ten greatest lawyers.

The Award was established by friends of the Society through the Community Foundation of Nova Scotia, an organization that supports philanthropy across the province.