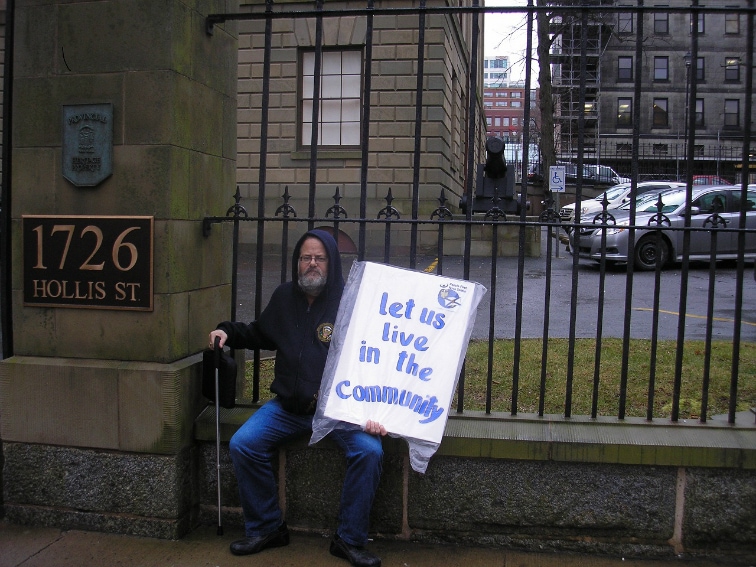 KJIPUKTUK (Halifax) – Questions were a little tougher for Community Services deputy minister Lynn Hartwell this Friday, on her second day as a witness at the human rights tribunal at the Best Westin on Chocolate Lake in Halifax.

The board of inquiry, chaired by  J. Walter Thompson, must determine whether the lack of community living options for people with disabilities amounts to discrimination. The tribunal started in the spring, and has met for well over 20 days by now.

While Thursday’s questions for Hartwell, by government lawyer Kevin Kindred, were friendly, her responses could not hide how little concrete follow up there has been on the government’s grand promises contained in the 2014 disability roadmap. That roadmap lays out how large institutions for people who live with developmental disabilities would be phased out, and how to make their care more personalized.

Friday’s questions, by lawyers Claire McNeil and Vince Calderhead, were mostly of a technical nature, as they sought to establish the supporting evidence for their case.

In order to establish that discrimination occurs, part of the complainants argument is that Community Services discriminates against people who live with disabilities, when compared to able-bodied people who receive income assistance.

“There are slightly below 45,000 people (recipients and their dependents) who rely on Income Assistance,” said Hartwell. “We are obliged to support them. It does not matter where the person lives, they will get that support. People have freedom of mobility.”

In contrast, Hartwell confirmed that people depending on the department’s Disability Support Program frequently do not enjoy that choice, and must live where an opening exists, frequently in a large institution, frequently far away from where their loved ones reside.

As well, legally income assistance funding is uncapped, meaning the department cannot refuse to support individuals in need because all the money budgeted in a fiscal year is already spent. Meanwhile, as Hartwell confirmed, a person with disabilities is put on wait lists, both for budgetary reasons, and because there are no suitable small option home vacancies, etc.

Organizations such as the Community Homes Action Group (CHAG) recommend an investment in 25 new small option homes a year over the next three years, a demand taken up by many parents who sent letters to the minister of Finance prior to the tabling of the most recent budget.

This would mean an increase of 75 new supportive living homes across the province by 2021, meeting the needs of up to 300 people with disabilities currently on wait lists and living in inappropriate environments.

In contrast, on Friday we heard how two years ago the government committed to create a mere eight new small options homes, four in year one, and four more in year two.

And even that modest target was not met. Nothing happened in the first year, one new small option home now exists in the New Glasgow area; two more are in the planning stage, Hartwell said. Each small options home houses three to four residents.

We work within our allocated budgets, said Hartwell. “These budgets reflect budgetary constraints across government.”

It’s important to remember that this tribunal is fundamentally about individuals who languish in large institutions, and about parents who don’t know what will happen to their loved ones when they die.

Four years after the publication of the roadmap nothing has changed. Whatever we want to call it, effectively the moratorium still exists.

Maybe we should just call it austerity.

Next Post Danny Cavanagh: No justice for restorative justice workers