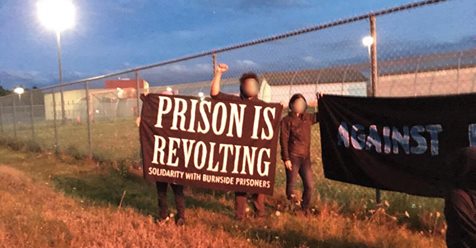 KJIPUKTUK (Halifax) – On the evening of September 9 police forcefully removed some thirty protesters attending a rally outside of the Burnside jail. They were there to support of the non-violent prisoners’ protest taking place inside.

Rather than making an effort to resolve the matter in a civilized fashion, police threatened protesters with a dog, used pepper spray, and threw one protester violently to the ground and then arrested him.

All this without a warning, according to the protesters, and while they were just about ready to call it a day.

“We were at the jail to celebrate the political action by the prisoners inside. We needed to be seen and heard, so we had music, drums, and we set off some fireworks, never aimed at the facility,” says Sakura Saunders, one of the protesters and the designated liaison in case police were to show up. “We did so in plain view of prison staff, and we were never asked to leave.”

When the group was about to head home, police arrived.

“We’d left the range where the men were, and while heading back we stopped for a last salute to the women,” says Saunders. That’s when the police came onto the scene.

“They never gave any kind of warning, one barreled right past me, another yelled at me, and threatened me with his dog, and a third one kept shooting pepper spray into the air,” says Saunders.

Saunders, being the designated liaison if police were to arrive, continued to make efforts to dialogue, but to no avail. In fact, the officer’s behaviour became so threatening that another protester had to pull her away.“Police were very violent, extremely unprofessional,” Saunders says.

The women prisoners saw their supporters get pepper-sprayed right before their eyes. “We could see the silhouettes of them making heart shapes with their hands in the windows as we were attacked,” Saunders says.

She thinks the charges against her arrested fellow protester are baseless. The idea that he was trying to climb the fence in particular strikes her as pretty far fetched. “Why would anyone in his right mind want to climb into a prison while making whole lot of noise and in plain view of staff, what would that possibly accomplish?”

The man who was arrested is charged with several summary offences, all of which Saunders strongly believes are trumped up, serving to intimidate protesters both outside and inside the jail.

To help fight the case in court protesters are asking for financial support so that a lawyer can be hired. You can make a donation here, or e-transfer funds to halifax@iww.org.

Next Post Statement by Burnside prisoners: We will continue to speak and fight until no more lives are lost