KJIPUKTUK (Halifax) – A recently published report shows that incomes for people on welfare in Nova Scotia are entirely insufficient, and on a downward trajectory.

They are also by and large the lowest in Canada.

A single person deemed employable received $6,672 in 1996, after the Province took on these payments from the municipalities. In 2017 that same person received $7,433. That’s a slight increase but still less than the $7,514 she received in 2013, when the current Liberal government took power.

These numbers include not only social assistance payments, but also all available federal and provincial tax credits.

All this according to a report issued by Maytree in November of this year. Maytree started to publish this yearly report in 2017, taking over from the now defunct Caledon Institute.

Only couples with two children has seen some improvement over the years, largely the result of more generous federal child benefits.

All these dollar figures are fairly abstract. How inadequate are welfare payments in Nova Scotia really?

Poverty is measured in a bunch of ways. One benchmark that is frequently used is the the Market Basket Measure (MBM.)

MBM is based on the cost of a specific basket of goods and services representing a modest, basic standard of living. It includes the cost of food, clothing, footwear, transportation, shelter and other expenses. Recently, the Government of Canada announced that the MBM will be used as Canada’s Official Poverty Line.

Here is the table that compares what you really need and what you actually get. The table applies to people who live in Halifax, because MBM is calculated on a community basis.

A single person deemed employable receives only 38% of what she should receive to live a half-decent life! A person with a disability only gets half that amount!

Even a couple with two children, comparatively well-off in Nova Scotia, only receives 77% of what is required!

Let this sink in. And yes, I am pulling out the exclamation marks for this.

How does Nova Scotia compare with other provinces?

Canada-wide Nova Scotia can indeed claim bragging rights for being the most miserly province, as the following table shows. 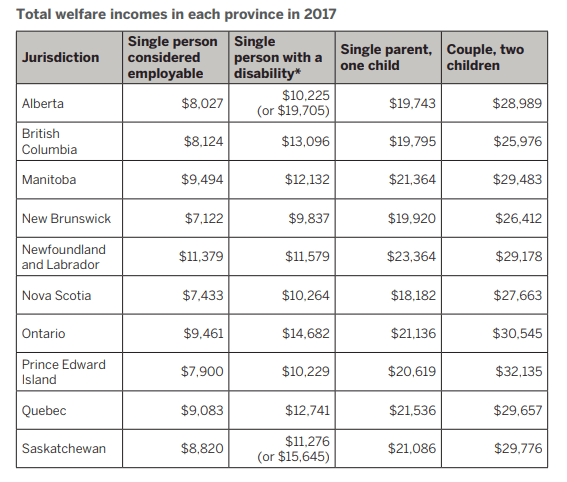 What about that historic increase in 2015?

It was celebrated as “the largest increase ever,” by premier McNeil, which was repeated unquestioningly by all the news media in this province.

We argued on these pages that taking into account inflation it was a mere pittance.

That increase happened in 2015. Taking into account inflation, a full year later, in 2016, a single person deemed employable received an additional $66 over the entire year, the report shows.

A single person with a disability got $25 more in 2016 than the previous year. And in 2017 that same person was once again $34 poorer than the year before, and back into a downward spiral.

Previous Post Sackville tragedy is wholly due to an infrastructure oversight