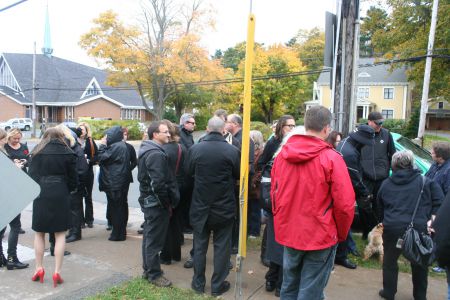 “We only met with the company for a very short time, mostly it was the appointed conciliator Peter Lloyd  going between rooms,” HTU vice president Frank Campbell tells the Halifax Media Co-op. “We were working on a response to their proposals when we were told that we were receiving (management’s) final proposal. Take it or leave it.”

A news release by the HTU states that the company wants to cut salaries and increase working hours, significantly reduce benefits in the defined benefit pension plan, and eliminate seniority considerations when staff are targeted for layoffs.

As well, management continues its efforts to substantially reduce the newsroom in size.

Now the company intends to lay off 30 percent of the remaining newsroom staff, even if all of management’s proposals were accepted, Campbell says. “We were told that editing staff, web editors, and photographers will be targeted.”

Management intends to outsource or use internal non-unionized workers to pick up the slack, Campbell believes.

Campbell expects that after the conciliation report is filed the company will lock workers out as early as late January.

He hopes readers will be vocal in their support of the newsroom workers.

And if it were to come to a lockout, we hope readers understand that the product is not the newspaper of old, says Campbell.

But that is not the full story, Campbell believes.

“We don’t live in a cave, we know the industry is in trouble,” Campbell says. “But by the same token, we think that this particular news agency is in more trouble because of mismanagement, not just the vagaries of the market place.”

“For an employer who so eagerly embraced the findings of the Ivany report, it’s curious that the Herald wants to eliminate good-paying jobs,” Local president Ingrid Bulmer says in the press release.

“It’s an insult to us and to all Nova Scotians who rely on The Chronicle Herald as a respected source of news.”

Correction: Frank Campbell expects the company to lock out its workers after the conciliation report is filed, rather than simply impose its contract demands, as earlier reported.