KJIPUKTUK (Halifax) – The Nova Scotia Federation of Labour is putting its weight behind the ongoing consumer boycott of Chronicle Herald advertisers.

“There comes a point where you leave  people no choice,” says Danny Cavanagh, president of the Federation. “The sooner these companies stop advertising, the sooner the newsroom workers can get back to work.”

The provincial newspaper wants to cut salaries and increase working hours of newsroom workers, significantly reduce their benefits in the defined benefit pension plan, and eliminate seniority considerations when staff are targeted for layoffs.

The journalists, editors and photographers, members of the Halifax Typographical Union, have been on strike for 44 days.

Cavanagh emphasizes that the boycott is only until the conclusion of the strike. “We don’t want to hurt the paper, he says, “but we feel that we are left with no choice.” 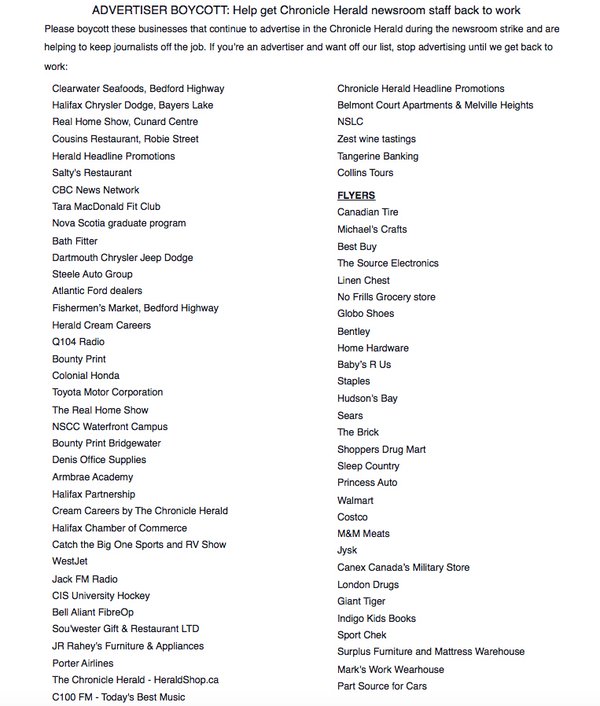 Cavanagh believes that the Federation’s call to not do business with Herald advertisers packs some punch. There are 70,000 union members affiliated with the Federation province-wide, 45,000 of those live in HRM, Cavanagh says.

“Businesses need to understand the importance of unionized workers across the province, and the support that we give one another,” says Cavanagh.

Affiliated unions will be approached, says Cavanagh, and a social media campaign will be directed at union members and the general public.

Secondary pickets of companies that advertise with the Herald will continue. Hotels that continue to distribute the paper for free will also be approached.

The HTU is also asking that readers cancel their newspaper subscription for the duration of the strike.

“If the Herald believes that they can starve the workers out than they are sadly mistaken,” Cavanagh says.

Previous Post Warehoused at the Nova Scotia Hospital for 10+ years