KJIPUKTUK (Halifax) – a new organization on the South Shore wants citizens to have more say in offshore oil exploration. 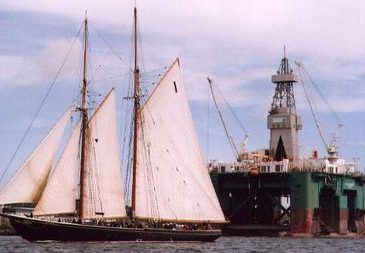 The Campaign to Protect Offshore Nova Scotia (CPONS) is meeting with South Shore-St. Margaret’s M.P. Bernadette Jordan this morning to deliver that message.

“The CNSOPB is an agency designed to take the political heat off  politicians,” says Puxley.”Ostensibly it is staffed by experts and acts in the public interest, but most people on the Board have industry backgrounds and are prisoners of the culture of that industry.”

They can’t judge fairly because they are blind to the interests of those who depend on fishing or tourism for a living, or to those who just want to continue to enjoy the natural beauty of Nova Scotia’s South Shore, Puxley believes.

To prove his point Puxley talks about Shell Canada’s reluctance to have a capping stack nearby in case of a subsea well blowout.

After much public pressure the company committed to bringing a capping stack on site in 12 days if such a disaster were to occur, rather than the 21 days it originally announced.

“In Alaska they have 24 hours, here we give them 12 days. That’s just craziness if you think of the consequences. In response, CNSOPB CEO Stuart Pinks said it would cost $23 million to have a wellcap handy to the site,” Puxley says.

“$23 million in a project that is over $1 billion is peanuts. Why should Pinks even regard that as a public expense,” Puxley wonders.

One thing that needs to change is how the CNSOPB involves the public in its decisions, says Puxley.

“CNSOPB held an open house here in Lunenburg during the winter,” says Puxley. ”I was expecting presentations, and an acknowledgment that certain aspects of Shell’s case were controversial.”

“But when I raised detailed questions about the provisions in case of a disaster it became apparent that their job was mainly to justify the industry perspective, and to pat me on the head and tell me that they got it all covered.”

But we should be concerned, says Puxley, pointing to Shell Canada’s loss of a two-kilometer-long pipe earlier this year.

“First you listen to a Shell spokesperson quoted in the media saying how they are on top of the research and know how to have a fail-safe well. Then they drop two kilometers of pipe because they underestimate the size of the waves in the Atlantic,” says Puxley.  “That doesn’t instill a great deal of confidence in the rest of their claims.”

“They’re drilling one of the deepest offshore wells in the world. The deeper you go, the more marginal your knowledge and the higher the risks,” Puxley says.

So what should change?

CPONS is calling for a Board that is more broadly representative of the community and appointed through an open and more democratic process, says Puxley.

Hearings prior to environmental approvals  should be mandatory, not optional and seemingly at the CNSOPB’s whim, Puxley suggests. And public interest groups and independent experts should receive funding to allow them to make their case.

As well, the CNSOPB should be strengthened. With just a couple of staff dedicated to environmental issues the Board has no way to counteract the powerful oil and gas industry.

Puxley believes the time is right to have that conversation with the local member of parliament. During the election the Liberals said very clearly that communities should  have the final say in these environmental matters, he says.

It so happens the two federal representatives on the Board are up for nomination, he says.

“Let’s hold off on that and let’s have a moratorium until we have democratized.”