Something peaked my attention while at this May’s Let’s Keep Talking Awards sponsored by the Mental Health Foundation of Nova Scotia.and seeing the videos about the people who won the awards. 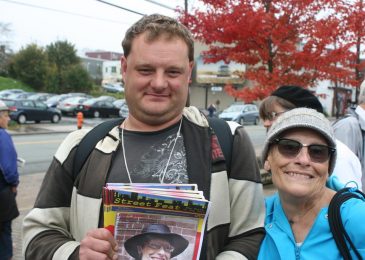 It seemed something was missing.

From what I saw I gained the gut feeling that the award winners do not live in poverty.

However, people with mental Illness often do live in chronic poverty. That is my experience as a poverty advocate in my community, and also through writing articles In the Halifax Media Co-op, which actually got me nominated for an award.

One of the many causes of poverty is people also having to deal with mental health issues.

People with mental health issues and illnesses feels like they are not getting accepted into society. Poverty is a significant risk factor for both poor physical health, as well as mental health. There is a strong and straightforward relationship between poverty and mental illness.

These days you see lots of public protesting happening for ending poverty, and affordable housing.

However, everything that is being done to advocate ending poverty for people living with mental health stigma is being done behind closed doors.

If you were to look at the information on the Bell let’s talk campaign poverty is not even mentioned in their content, no matter how good they do to get the word about mental health out.

What should be happening more to reduce stigma is protesting and press conferences to bring attention to the poverty aspect of mental illness.

Kendall Worth is co-chair of the Benefits Reform Action Group and a poverty activist.