KJIPUKTUK (Halifax) – This morning Nick Jennery, executive director of Feed Nova Scotia told MLAs who are members of the Community Services Standing Committee that keeping food banks across Nova Scotia supplied is very difficult, but that his organization is managing, so far.  The question is, for how much longer? 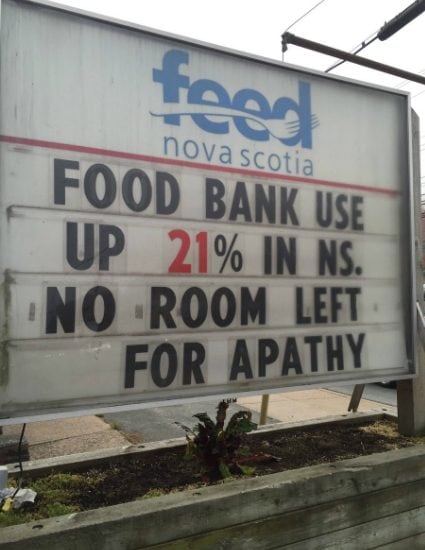 “Every day we distribute 7,000 kilograms of food, which is close to 16,000 pounds, all across Nova Scotia. Half of that is fresh food and perishables,” said Jennery.

That job is getting harder, Jennery said. Food bank use in Nova Scotia in 2016 spiked 20.9% over the previous year—the highest increase among provinces in the country. It’s also a 40.9% increase over 2008.

66% of foodbank users are on social assistance.

“We can’t feed our way out of this crisis,” Jennery told the MLAs, adding that he is concerned that Feed Nova Scotia may not be able to absorb any further increases in clientele. “I can’t make this model more efficient,” he said.

Meanwhile, the provincial government gives all of $12,000 to Feed Nova Scotia, a fraction of Feed Nova Scotia’s community-funded operating budget of roughly $3.5 million, Jennery told reporters after this morning’s meeting.

If not money, MLAs had lots of helpful suggestions on how to run Feed Nova Scotia. Like inviting nutritionists to give talks, start more community gardens, hold more food drives, and yes, start couponing.

“For my own section of my riding, South Woodside, which has quite a bit of poverty there, and who have trouble accessing Feed Nova Scotia because of the distance, I created my own little food bank in my office. And somebody in my office has been couponing, and let me tell you, couponing gets you a lot of stuff for very little money,” Liberal MLA Joyce Treen told Feed Nova Scotia executive director Nick Jennery.

“You might want to think about finding some people who are good at couponing, it’s amazing the amount of food you can get,” Treen said.

Jennery said he would look into it.

During a scrum with journalists after the meeting Jennery said that although Feed Nova Scotia is not requesting government’s financial support, it does have a request in for help in acquiring a larger facility.

“We are unable to deliver more perishable product let alone support the increase in clients,” said Jennery. “We have been talking (with government) about this for the past year. There is a review underway right now. But I think perhaps we need to be more assertive.”

A  new Farm Tax Credit program implemented last May has been extremely helpful, said Jennery. In the first eight months perishable food donations from farmers doubled to 200,000 kilograms, and could now possibly be expanded to include not just vegetables but also meat products and perhaps dairy.

Check out how you can support the excellent work of Feed Nova Scotia.